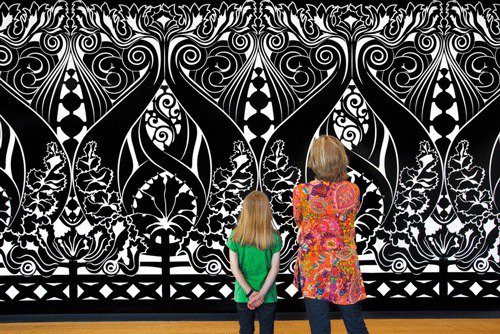 Canada is the second largest country in the world by area and boasts both a vibrant nationwide arts community and a strong public commitment to culture. And yet Canadian contemporary art has not received widespread attention outside Canada's borders. The largest survey of contemporary Canadian art ever produced outside Canada, Oh Canada features work by more than 60 artists who hail from every province and nearly every territory in the country, spanning multiple generations and working in all media. MASS MoCA's curator Denise Markonish spent the last three years crisscrossing Canada to view hundreds of exhibitions in museums and galleries, visiting over 400 artists' studios, and making connections with a full range of artists working in Canada today.

Markonish's extensive research brings this project the fresh perspective of an informed and curious outsider. While Oh, Canada will ask questions such as "What are some of the distinguishing characteristics of art made in the country?" its aim is not to present a merely nationalistic show. Rather, the goal is to encourage a dialogue about contemporary art made in Canada (one touching on issues of craft/making, conceptualism, humor and identity), a dialogue that will resonate just as deeply for Canadians as for outsiders.

The exhibition will be mounted in the 14,000 sf comprising MASS MoCA's first floor galleries, as well as additional indoor and outdoor spaces. From an initial list of over 800 prospects Markonish narrowed down her list, focusing for the most part on artists who have shown less frequently in the U.S. The artists participating in Oh, Canada include:

The first work visitors will encounter at the museum will be Kim Adams’s Optic Nerve, a car that has been altered to glow from within like a giant lamp. A new massive outdoor commission by Michel de Broin will use full-sized picnic tables as its basic building element, while another new work by BGL will be comprised of crowd control barriers fashioned into a fantastic carnival ride in our front courtyard.

Visitors will find new work from Gisele Amantea, who will create a densely patterned abstraction re-conceiving the foyer of MASS MoCA’s Hunter Center for the Performing Arts. In the lobby, viewers will encounter work by Rita McKeough and new songs by the Cedar Tavern Singers (who will record new songs based on Canada’s arrival in the Berkshires). In the main galleries, John Will’s new text-based piece will include the names of all the artists from the exhibition.

Ten other new commissions will join 95 already existing works (made within the past five years) for the exhibition including: Micah Lexier’s A Coin in Every Corner comprised of a series of specially minted coins painstakingly installed in corners throughout the multi-building factory campus; Kent Monkman’s double diorama based on fictitious buddy characters Tonto and the Lone Ranger, and Germany’s Winnetou and Old Shatterhand; and Ed Pien’s installation made from cut paper and projected video; and new work from Terrance Houle, Divya Mehra, Graeme Patterson, Garry Neill Kennedy, Mitchell Wiebe, Craig Leonard, Janice Wright Cheney and David Harper.

The exhibition will also be accompanied by live events at MASS MoCA focusing on Canadian acts.