The deep of the modern. For the first time the European Biennial of Contemporary Art will also display the rich mining heritage in a surprising and innovative way to both local and international audiences. Curators developed the concept for Manifesta 9 addressing the social and societal impact of the recent past in Limburg. The exhibition 'The Deep of the Modern' will be presented as a triptych: 35 international contemporary artists are invited to create new work, the historical section provides an overview of works from the 19th and 20th centuries, the third section focuses on the extensive legacy that the Limburg mining industry has left behind. 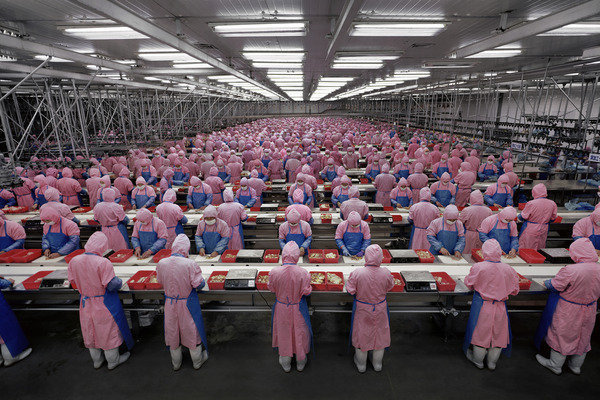 Manifesta, the European Biennial of Contemporary Art, is the only nomadic contemporary art biennial, showcasing the most innovative work by artists and curators from Europe and beyond. Manifesta changes its location every two years in response to a variety of social, political and geographical considerations. Since 1996, it has been held in Rotterdam, Luxembourg, Ljubljana, Frankfurt, Donostia-San Sebastián, Nicosia (cancelled), Trentino-Alto Adige and the Region of Murcia. Opening in Belgium on June 2, 2012 and running until September 30, 2012, Manifesta 9 will be taking place in the former coalmining complex of Waterschei in Genk, Limburg, Belgium. Since its first edition 15 years ago, Manifesta has been concerned with the idea of breaking down barriers, crossing borders and building bridges. Incorporating exhibitions, performances, multi-media experiments and broadcasts, Manifesta 9 highlights the very best of creative thought, research and experimentation, involving individual artists and artistic communities from diverse backgrounds from all around the world.

MANIFESTA 9 CURATORIAL CONCEPT: THE DEEP OF THE MODERN

The Deep of the Modern intends to create a complex dialogue between different layers of art and history. Its point of departure is the significance of the former coalmining region of Belgian Campine as a locus of industrial capitalism’s imaginary and ecology. The remains of the Waterschei mine in Genk, Limburg, which comprise the main venue of Manifesta 9, are not the only protagonists in this story. The Deep of the Modern was perhaps most inspired by the overall geographical-ecological “mining machine” that transformed the region over the course of the 20th century, giving rise to a complex landscape of garden cities, landscape planning, canals, roads and railroads. The Deep of the Modern will develop as a dialogue between three different sections: Poetics of Restructuring. This section consists of contributions from 39 contemporary artists, focusing on aesthetic responses to the worldwide “economic restructuring” of the productive system in the early 21st century, and developments in industrialism, post-industrialism and global capitalism. The selected works will interact as directly as possible with the current state of ruin of the building and its immediate surroundings. The curatorial team has worked to create a balance between time-based works, installations, and other artistic media, and to provide a geographically and gender diverse representation of contemporary artistic practice today. The Age of Coal. An art historical exhibition comprising artworks from 1800 to the early 21st century about the history of art production aesthetically related to the industrial era. This essay on a new kind of Material Art History is organized into several thematic sections with artworks in which coal played an important role. Coal as the main fuel of industry, as a major factor of environmental change, as a fossil with significant consequences in the field of natural science, as the main referent of certain forms of working class culture and as a material symbolic of the experience of modern life. In short, The Age of Coal examines how coal affected and defined artistic production.

17 Tons. In addition to the two sections dedicated to art, Manifesta 9 will include a new element: an exploration of the cultural production that has been powered by the energy of memory that runs through the diverse heirs of coal mining in the Campine region of Limburg, as well as several other industrial regions in Europe. This section is the product of a collaboration between individuals and institutions who, coming from disparate disciplines and practicing different social forms of agency, continue to activate the collective memory and the preservation of both the material and immaterial heritage of coalmining. The title of the show refers simultaneously to the most famous song of coal miners around the world (16 Tons, recorded in 1946 by Merle Travis) and to the title of one of Marcel Duchamp's most famous installations (Sixteen Miles of String, 1942). The discrepancy between 16 and 17 is meant to suggest the need to take a step beyond the current stage of the coal industry's memory claims. Although the exhibition is divided into different sections – all brought together in this single building in Waterschei – there are thematic, poetic, and methodological affinities that interlace the works of all three of its sections. The selection and organization of the exhibition aim to create resonances between the different levels and elements of the show across different times, genres and positions within the building. We hope that the contemporary artworks will provide novel insights into the art historical objects and heritage practices represented, and vice versa. In that sense The Deep of the Modern places its trust in the power of the exhibition and in the audience's ability to make sense of the three exhibits by comparing and working through different elements of cultural production. Manifesta 9 proposes to redirect the course of Manifesta toward an advocacy of art production and historical knowledge as loci of aesthetic and social reflexivity and intergenerational responsibility. In that sense, the exhibition reflects the complex mediation of artworks, images, historical information and cultural institutions in the production of modern and post-industrial ways of thinking. The three sections attempt to explore the ways that art and culture are immanent to the social processes that both record and transform the outlook of specific social formations.

Head of the Curatorial Department is the Mexican curator Cuauhtémoc Medina. Cuauhtémoc Medina is critic, curator and art historian, holds a PHD in History and Theory of Art (PhD) from the University of Essex, UK and a degree in History from Universidad Autónoma de México. He is a research fellow at Instituto de Investigaciones Estéticas of the Universidad Nacional Autónoma de México. Medina was the first Associate Curator of Latin American Art in the collections of Tate Modern and curated events and exhibitions like When Faith moves Mountains with Francis Alÿs (Lima, Peru, 2001), The Age of Discrepancies. Art and Visual Culture in Mexico 1968-1997 (co-curated with O. Debroise, P. García & A. Vazquez, 2007-2008). In 2009 he curated What else could we talk about?, the project by Teresa Margolles presented at the Mexican Pavilion at the Venice Biennale. In 2010 he organised Dominó Caníbal, for PAC Murcia, Spain.

The other members of the curatorial team of Manifesta 9 are associate curators Katerina Gregos and Dawn Ades. Katerina Gregos (born in Athens, Greece; based in Brussels, Belgium) is an art historian, curator and writer. She is currently curator of Newtopia: The State of Human Rights, Mechelen, Belgium. In 2011 she curated the Danish Pavilion at the 54th Venice Biennale, with Speech Matters, an international group exhibition on freedom of speech. That year she was also co- curator of the 4th Fotofestival Mannheim Ludwigshafen in Germany. In 2006/2007 she was the artistic director of Argos – Centre for Art & Media in Brussels and prior to that she was the founding director of the Deste Foundation – Centre for Contemporary Art, Athens. As an independent curator Gregos has also curated numerous international exhibitions including Hidden in Remembrance is the Silent Memory of Our Future, Contour 2009 - The 4th Biennial for Moving Image, in Mechelen, Belgium (2009); Give(a)way: on Generosity, Giving, Sharing and Social Exchange, the 6th Biennial E V+ A: Exhibition of Visual Art, Limerick, Ireland (2006). Katerina Gregos regularly publishes on art and artists in magazines, books and exhibition catalogues, and is a frequent speaker in international conferences, biennials and museums worldwide. She is also a visiting lecturer at HISK – The Higher Institute of Arts, Antwerp.

Dawn Ades is a fellow of the British Academy, a former trustee of Tate and was awarded an OBE in 2002 for her services to art history. She has been responsible for some of the most important exhibitions in London and overseas over the past thirty years, including Dada and Surrealism Reviewed (1978), Art in Latin America (1989) and Undercover Surrealism (2006). Dawn Ades has a remarkably wide knowledge of the social and poetic dynamics of modernism and the avant-garde both in Europe and the Americas.

MANIFESTA 9: THE INITIATORS AND PARTNERS