The Future is Ours, Classroom Portraits 2004-2012. Germain takes picutures of classes all over the world. The detailed colour shots tell the story of the schools, the pupils, their environment and invite us to imagine what the future holds for them. 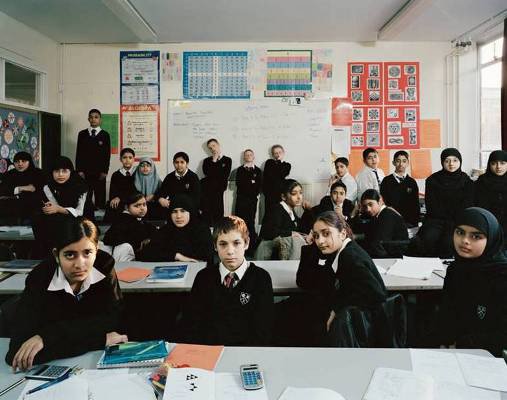 For his Classroom Portraits series, British photographer Julian Germain photographed classes all over the world. The detailed colour photographs tell the story of the schools, the pupils and their environment. Germain began the series in 2004 in North-East England before extending it to schools in North and South America, Europe and Asia.

Despite the diverse locations, the subject matter is universally recognisable and evokes memories of the viewer's own childhood, classmates and a desire to know what happened to them. Germain takes the teacher’s place at the front of the class, and the children – it is a challenge for them to sit still – look intently into the lens. Caught by their gaze, the viewer is confronted with the idea of the future. What does it hold for these children? The Future is Ours is a summer exhibition for all ages and will have its world premiere from 2 June to 2 September 2012 in the Nederlands Fotomuseum, in Rotterdam, The Netherlands. A comprehensive photo book will be published to coincide with the exhibition.

A child's gaze
Julian Germain's work ranks among the best in contemporary British documentary photography. The theme of The Future is Ours – Classroom Portraits 2004-2012 is as simple as it is rich: group portraits of children in their classroom. In this series, Germain reinterprets the traditional class photo in his own, perceptive way. He enters a classroom while a lesson is in progress, the pupils sit in their usual places and he only moves a child here and there to ensure no one is obscured by anyone else. He sets up his camera on the spot where the teacher usually stands, at 'child height'. In some cases he also shoots a short video from this angle, for which the children have to sit completely still. They are thus aware of the photographer and look directly into the camera. As a viewer, you look at the photo and 10, 15 or 30 pairs of young eyes gaze back at you.

By photographing in colour with a large-format camera, Germain captures even the smallest details. The children's intent faces and the objects in the classrooms tell the story of the pupils and their environment. Germain also asked the children to complete surveys that asked both serious and playful questions. He converted the results into infographics, providing the viewer with more information about the children’s daily lives as well as their music preferences, aspirations and so on. Germain thus gives us a glimpse of how the children experience the world.

The future is ours
The power of the images lies in their direct connection to us as viewers. We all think back to our own class photos and wonder what happened to our classmates. Germain's photographs invite us to imagine what the future holds for these pupils; what their dreams, hopes and opportunities are. By presenting different countries, schools and age groups, he creates a picture of the similarities and differences in contemporary education across countries, cultures and social classes.

On display
The exhibition will comprise class photos of varying formats from countries such as the Netherlands, Spain, Germany, Hungary, Great Britain, Bangladesh, USA, Russia, Brazil, Argentina, Peru, Nigeria, Ethiopia, Saudi Arabia, Bahrain, Qatar, Yemen, Japan and Taiwan. Accompanying the photographs is information that Germain gathered about the children during shooting. Short films will also be shown alongside a selection of the most recent class photos that Germain took in March at a number of primary and secondary schools in Rotterdam. These Rotterdam schools will be invited to visit the museum and meet Germain during a special school day.

Julian Germain
Julian Germain achieved broad recognition with Steel Works (1990). For this, his first book, he utilised a combination of his own photographs, amateur photographs and (local) press images. Placing one's own work in a historical-photographical context has now become commonplace but at the time it was revolutionary. It is evidence of how Germain, as a young photographer, was already looking for alternative ways to use photography to tell stories – stories that did more justice to the people who were part of them and gave them a voice. This approach makes his collaboration with children from Brazil's favelas all the more understandable. Instead of taking photos himself, he gave the children cameras so that they could capture their own daily lives (No Olho da Rua, 2000). In For every minute you are angry you lose sixty seconds of happiness (2005), Germain follows Charlie, an old man with a beautifully simple life philosophy. The publication combines portraits with interior photos and close-ups of objects in the house and garden. This respectful, affectionate approach to photographic documentation has also been much imitated internationally. Germain’s work ranks among the best in contemporary British documentary photography. He is the only foreign editor of Useful Photography.