Artistic practice and urban condition: the legacy left by architect Le Corbusier and Jean Genet; Office Baroque Portfolio, a display of the 46 photographs that evidence Gordon Matta-Clark's ephemeral interventions; screening of Roberto Rossellini's documentary film portraying the first days of the Pompidou Centre in Paris and the impact it had on visitors. 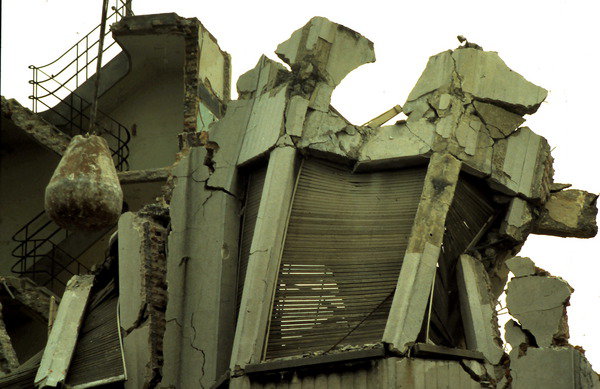 The “anarchitectures” of Gordon Matta-Clark dialogue in the MACBA Collection with Le Corbusier, Jean Genet and Rossellini’s last film

Gordon Matta-Clark. Office Baroque Portfolio offers an exhibition centred on the 46 photographs taken by Gordon Matta-Clark in the nineteen-seventies documenting the ‘cuts’ he made in buildings.

Roberto Rossellini brings to an end this journey through the relationship between artistic practice and the urban condition, with a film about the opening of the Pompidou Centre.

The MACBA presents a journey in three chapters through the relationship that has been established over time between artistic practice and urban condition. The first part shows the legacy left by architect Le Corbusier and writer Jean Genet following their visit to Barcelona in the early nineteen-thirties, when they each applied their critical gaze to the city’s streets. The central theme of the exhibition is set by Office Baroque Portfolio, a display of the 46 photographs that evidence Matta-Clark’s ephemeral interventions during the last six years of his life and which were recently deposited in the MACBA by the LATA Collection, along with the series of drawings entitled Sky Hook (1978), recently acquired by the MACBA Foundation. The final section is taken up by screening of Roberto Rossellini’s documentary film portraying the first days of the Pompidou Centre in Paris and the impact it had on visitors.

Gordon Matta-Clark and the Office Baroque Portfolio
The central idea of the exhibition is based on 46 photographs that document the famous building cuts (ephemeral slices through and extractions from buildings) made by Matta- Clark in the nineteen-seventies. The MACBA is one of Europe’s leading institutions as regards the work of this artist, thanks to the legacy deposited at the Museum by the LATA Collection. The pictures document the ephemeral cuts and extractions he made in buildings which assured him a prominent place in the history of contemporary art. In the first, Bronx Floors (1972-1973), he outwitted the police in order to use a handsaw and cut out rectangular sections from floors and walls in abandoned buildings in the Bronx neighbourhood, which he then showed at commercial galleries. In the last of these actions, Circus-Caribbean Orange (1978), commissioned by the Chicago Museum of Contemporary Art, Matta-Clark drew a complex web of circular cuts in three houses adjoining the museum itself.

Pride of place in the exhibition is occupied by Office Baroque (1977), one of Matta-Clark’s most important works. The title of this masterpiece not only alludes to Rubens, but also, implicitly, to one of Matta-Clark’s jokes, as Office Baroque sounds like Office Broke, an allusion to the bankruptcy of capitalism. The work was produced at the invitation of Florent Bex, director of the Internationaal Cultureel Centrum (ICC) in Antwerp, and has been defined as the “most beautiful flight of light, air and time”. Various photographs of the time show visitors walking around the insides of the building in a labarynthic tour which Matta-Clark himself defined as “a stroll animated with endlessly mutating interior views”. The artist’s assistant on that work, François Verresen, expressed in an interview the difficulties they had to overcome to ensure the alterations made in the buildings by the cuts, extractions and structural attacks did not affect their safety. A film by Cherica Convents and Roger Steylaerts reveals the lengths they had to go to in creating a piece of the magnitude of Office Baroque.

Gordon Matta-Clark is one of the artists most closely associated with the urban condition. Like many others, he set up in New York’s SoHo in the late nineteen-sixties and went on to become an exponent of the so-called loft situation. The artist’s career was cut short by his premature death in 1978. His building cuts, such as Splitting (1973), Day’s End (1975) and Conical Intersect (1975), are still considered works which changed the traditional notion of sculpture and have become icons of urban activism. These have now disappeared and the only record they ever existed is to be found in the photographs and films on display today in the MACBA, a legacy which the artist himself prepared for that very purpose.

Le Corbusier and Jean Genet in the Raval
The exhibition section dedicated to the work of Matta-Clark has some illustrious antecedents. Because Le Corbusier and Jean Genet also applied their critical gaze to the urban fabric. Invited by the GATCPAC in the nineteen-thirties, Le Corbusier visited Barcelona city centre in order to perform a diagnosis and remodelling that the Spanish Civil War had truncated. He started out from the basis of a hygienist principle as a means of eradicating the social decay so graphically described in Jean Genet’s The Thief’s Diary, published in 1949. This first part of the display situates us between two extremes: that of the rationalist interest in cleansing the city, and the urge to explore more marginal and amorphous aspects. The sculptures and reliefs of Joaquim Torres-García, the mobiles of Alexander Calder, both from 1931 and made in Barcelona, and the 1934 Construcció lírica by Leandre Cristòfol enable us to illustrate this period, so rich in contrasts that we subsequently find reflected in works by Antoni Tàpies, Lucio Fontana, and Salvador Dalí as well as in Brassaï ‘s graffiti.

The critic Sebastià Gasch stated in an article published in 1929 in La Veu de Catalunya that he loved “living things”, in allusion to what he encountered on his walks with Miró through the streets of Barcelona’s famous District V, the Barrio Chino. He qualified those streets as “far more impressive than certain putrefied itineraries of dead archaeology”. We can see them today thanks to the photographs of Josep Domínguez, a municipal functionary given the task of documenting those parts of the city around the year 1932. The Arc del Teatre, Carrer de l’Est, Carrer del Migdia and Carrer de la Volta d’en Cirés also formed the setting for the 1934 film La bandera (The Flag), in which a Parisian criminal takes refuge in the seediest part of Barcelona.

That Barcelona also produced a profound impact on Le Corbusier, who drew female nudes on his notebooks – the result of an attraction awoken in him by the constant sight of prostitutes – which led the architect to identify the city with a woman’s body. One of his notes shows the outline of a Barcelona seen from the sea, with Montjuïc and the skyscrapers that Le Corbusier had planned on the seafront. The city’s silhouette resembles a sketch of the naked body of a woman.

The most recent exhibit in this section reaches us through the filmmaker José Luis Guerín and his film En construcció, a living record of the demolition of the district’s old buildings and the arrival of new inhabitants. All of which serves to highlight the tension between different representations of the city, between the voice that emerges from the street and that which emanates from the offices in which urban projects are conceived.

Roberto Rossellini’s Beaubourg
The filmmaker Roberto Rossellini drives home the point of this exhibition concept regarding urban development with his last ever film, a 54-minute tape which collects reactions of the public to the opening of the Pompidou Centre. Designed by Renzo Piano and Richard Rogers, the facility was opened on 31 January 1977 and three months later the director arrived with his team to see how this excessive building was operating, after having brought about the destruction of a large area of the Le Marais district in Paris.

The film has no music or commentary and in its day failed to attract much attention from the public. With the passage of time however it has become an exercise in cultural critique which highlights the relationship between museum and urban surroundings at a time when access to culture has been democratised for the sake of massification.

This screening of the film Le Centre Georges Pompidou represents the first presentation of the Rossellini 77 Triptych as defined by its producers, and includes Rossellini au travail and Le colloque de Cannes, two exceptional documents produced by Jacques Grandclaude. While the first of these reveals in great detail the process involved in making Rossellini’s film, the second follows the filmmaker during his presence at the 1977 Cannes Film Festival, shortly before his death. The triptych is complemented by the presentation of sound recordings made by Rossellini inside the Pompidou Centre using camouflaged microphones that captured spontaneous snippets of the conversations of visitors.

This would be his last work. It was produced in conjunction with the Communauté de Cinéma Création 9 Information, headed by its creator Jacques Grandclaude, and counted on the support of the French Ministry of Foreign Affairs.

In the context of the MACBA Collection, Rossellini’s film invites a reflection on the building in which it is being screened, which was also constructed following the destruction of a neighbourhood, as Guerin explains in the first part of this exhibition, which explores the many ways in which art and city relate.