Mount Fuji does not exist

The artistic gestures compiled here are defined both by their formalisation and by the stages of their realisation, as well as by the type of situation they are liable to provoke. 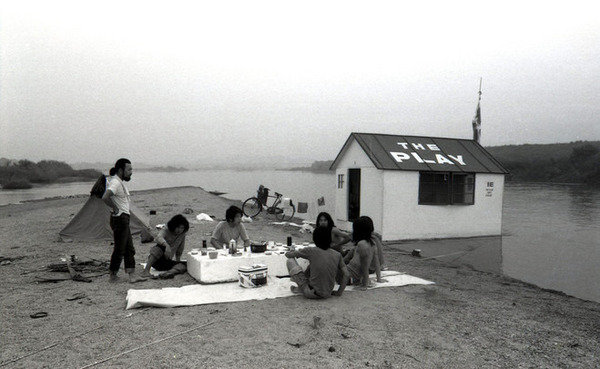 “Good work,” he said, and went out the door. What work ?We never saw him before. There was no door.” Richard Brautigan, Loading Mercury with a Pitchfork, Simon and Schuster, New York.
June 2011

Legend has it that wherever you are in Japan, you can see Mount Fuji. While in residency at the Villa Kujoyama in Kyoto, we tried to confirm this hypothesis on several occasions. We had been told that it could be seen through the window of the train to Tokyo. That on a clear day, it could be glimpsed from the higher storeys of the city’s buildings. That in the Five Lakes region, it could not be missed. That if we took such and such a train, such and such a boat, or such and such a cable car, we would be assured to witness it in all its serene and conical majesty. Yet we saw nothing of Mount Fuji. Each time, the experience of its contemplation disappeared behind thick layers of mist. Which were in turn replaced by the even thicker layers of its representations — whether drawn, photographed, or sculpted. Reproduced on etchings, posters and postcards, in Zen gardens, on restaurant menus and banknotes. By substituting itself for its own experience, its permanent and symbolic presence has confirmed the legend: Mount Fuji can be seen everywhere in Japan. Both everywhere and nowhere. We might as well say that it doesn’t exist.
995 — 1005

Mount Fuji doesn’t exist. “The stories we tell come from experience, from our own or from a shared experience. And in turn, we make it the experience of those who listen to our stories.” These few sentences borrowed from Walter Benjamin follow some of the lines of this second exhibition, which brings together artists who favour an approach of artwork as a process, as a shared and embraced experience that leaves room for many different appropriations and interpretations. The artistic gestures compiled here are defined both by their formalisation and by the stages of their realisation, as well as by the type of situation they are liable to provoke. This relationship to an art in constant movement, beyond trends and the necessity of producing an object coined as ‘art,’ is at the heart of this exhibition — a discreet art, free from any ostentation or spectacular quality, in favour of day-to-day actions, reaching beyond its representation and its being shown. Having lost its purpose, the work of art is then embodied everywhere and nowhere at once, within its object, its experience, and its memory.

The works exhibited here fluctuate between: a collective dynamics based on gestures freed from any productive necessity, an incursion into everyday life to scrutinize the nature of existence and the substance of things, a manuscript letter addressed to you, the search for eternal and fugitive perfection, a reflection on a window pane, a walk started 43 years ago, the pursuit of emptiness, a few grams of gold extracted from tons of waste, and a fragmented floor with every piece representing a draught. Playing on the different temporalities of their appearance, the works try to account for the permanent shift between here and there: from the evocation of an exhibition one day in 1967 to a collection of books, from an ad in a daily paper to a set of photographic documents recounting transient actions, from a musical composition being written to a drift on the river Seine.

A work of art sometimes possesses an amazing feature over which time has no hold, and it impregnates the memories of those to whom it is addressed even more enduringly, in that it lets them shed the light of their own personal experience on it. Each of us can thus become the potential repository of a body of experience, which we can take with us, hang onto, and let out when we feel the need to.