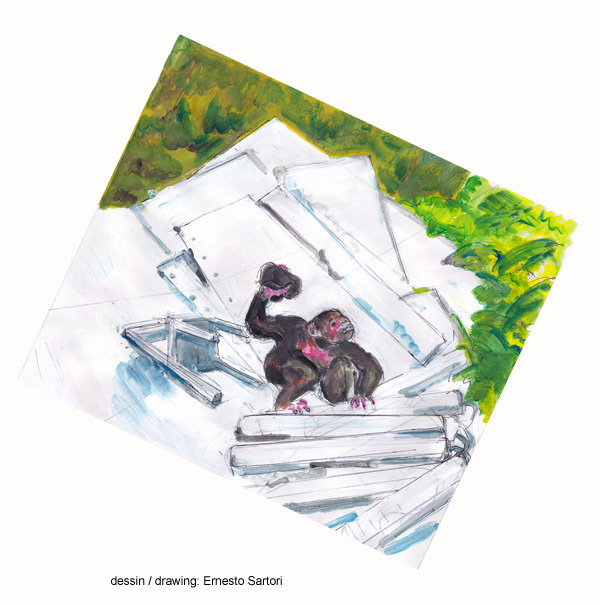 The Cloven Viscount places the reader in an exhilarating position. The philosophical tale, written by Italo Calvino in 1951—and maybe the least famous part of his trilogy Our Ancestors—describes a situation that we easily recognize, as it plays on a system of oppositions that shapes our vision of the world. In the tale, the evil half of the Genovese viscount Medard de Terralba comes back from the war, cloven by a cannon ball. Once he has moved back to his land, the man’s half, full of a resentful rage, cuts everything in two parts. Later on, the narration radically changes when the other half—the good one—miraculously reappears. The primary contrast between evil and good that Calvino stages is pushed to its extreme limits, ending up in total chaos. The two halves, as they finally confront each other, “baffle the paradigm”, in a way. We are facing the situation that Roland Barthes describes when he defines the Neutral as an interruption in the system of oppositions that shapes our lives.

The works in the exhibition seem to move forward towards a hypothetical revelation of the Neutral, through a body of heterogeneous references, specifically presenting a more indirect relationship to the subject. In the exhibition Figure IV that preceded Le vicomte pourfendu, Laura Lamiel initiated a reflection about works that attempt to contain everything. The fragment of enamelled-brick wall, which she has directly put together in the space, is a way to neutralise what refers to power (the will to unite and to dominate, to offer a monolithic vision), and to propose an open form or a self-portrait devoid of any narcissism.
Similarly, Jean-Charles de Quillacq’s performances only allow to see him in a fragmented way, through a juxtaposition of signs. He is present, but cannot be grasped. He submits himself to the general opinion who wishes for the subject to reduce itself but he stays out of reach, a shadow of himself that an imaginary stream pointlessly crosses.
Anne-Lise Coste’s paintings recall the “tip of the nose which bore a faint but certain trace of corruption” that Barthes describes in A Lover’s Discourse. In other words, the moment when we see “the good Image suddenly alter and capsize”, simply because of a minor incident, something unusual that appears suddenly.
In Charlotte Moth's Counter works, every surface hides a mystery. Thanks to photography, the artist neutralizes the binary dimension of meaning. She interrupts the physical and mental movement which consists in going behind the sequined curtain: logic is overruled, meaning that a possible apparition can stem from the curtain’s surface, or from what precedes it.
Like Charlotte Moth, Ian Kiaer examines Modernist architecture, with a particular attention to its relationship with painting. His installations refuse a division of genres. Kiaer wants to find another way of producing painting, by working on subtle contrasts which evade the duality painting/architecture and disturb set hierarchies. Thus he brings together the Venitian “petit-maître” Pietro Longhi and the architect Carlo Scarpa, underlining how they both exercised their arts as “minor forms”.
Finding its inspiration in an apologue, the exhibition invites to interrupt a Manichean conception of art: minimal vs. organic, masculine vs. feminine, major vs. minor, formal vs. conceptual.
MA

At the occasion of the Berlin – Paris gallery exchange, we will show, in the gallery’s projection room, two films by Michel François and Marcellvs L., represented in Berlin by Carlier I Gebauer. In collaboration with the gallery, we selected works that could respond to Le vicomte pourfendu.