Undercuts. This series consists of a collection of animal skins stretched over portrait format frames, so that the visible side of the picture is the inside of the animal's hide. 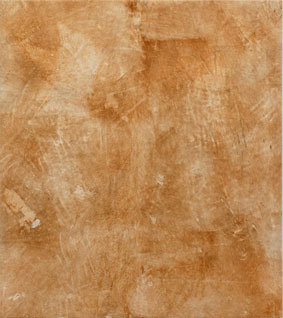 The exhibition Undercuts is set up between two prototypes of preservation of the motif, two models of writing "the origin", two monuments dedicated to the genealogy of the figures, two scenes of classification and taxonomy, two places shaping the observation: the zoo and the museum. In this space, the exhibition inserts two rhetorical figures, two settings dedicated to a certain optical technology: the mask and the portrait.

The series entitled Contre-Dépouilles (Undercuts) consists of a collection of animal skins stretched over portrait format frames, so that the visible side of the picture is the inside of the animal's hide. The title refers as much to the range of craftsmanship and technical know-how required when exhibiting a hide (the art of hunting, taxidermy, tanning) as it does to the vocabulary of classical sculpture, in which an element in the round is called 'undercut' when it requires the assembly of multiple casts, thus concealing a series of cuts in the image of its whole. The series includes a snakeskin inside out on a piece of museum furniture, a rope to keep the public back. The image of the threshold that the inverted snake forms is thus displayed indefinitely for the gaze that will try to understand the motive, that being either instrumental use or decorative function.

The inversion, of which the Contre-Dépouilles (Undercuts) is a product, is not to be distinguished from the skilled craftsmanship that preceded it, but it delimits a reverse to the technique of preserving the motif, which this know-how shows. The 'Contre-Dépouilles (Undercuts)', by revealing what is usually hidden from view, and depriving the eye of the motif of the animal skins (zebra markings, stripes, spots and rosettes) while aligning them to the setting that the museum provides (the genre of portraiture, the rope to keep the public back) implants in the exhibition the issue of the figure. A figure of which nothing allows its existence to be linked to an origin, a figure that has no memory of anything other than that of the succession of craftsmen who distance it from its original appearance, a figure from which any issue of traceability is removed, a figure that ceases to be the combination of its reference points but invents itself at the point of their exclusion. The identity of this figure, which would be a matter of reconstructing if we wanted to draw up its 'natural history', exhausts itself in the multiplicity of its potential identifications, producing a phantom identity. Here a Contre-Dépouille (Undercut) is a challenge to the observation: to retrace the course of the temporary identities, amassed in that of which it consisted, seizing the layers of the deposited transient meanings that have accumulated there. It embeds a spectral figure in the exhibition, a specular image living in an uncertain space, operating alternately by stripping bare, recovery, and processes of exclusion.

Suspended in the centre of the exhibition space, the piece entitled Soleil Inscrit (Inscribed Sun) presents itself in the form of a spherical lamp. Made of terracotta, the lamp, perfectly opaque, is lit but produces no light, so it would be necessary to break it in order to find its function. Coming from the 'fire arts', it pinpoints a panoramic viewpoint in the exhibition space from which to view the landscape of the exhibition, suspending from it an observation that, detached, is focused on the totality of the space. In that, this 'sun' is inscribed as they say, in Euclidean geometry, of an angle inscribed in a circle, i.e. integrated into a figure that includes it. From the panoptic observation that this lamp suggests, we could wait for it to come and throw a favourable light on the explanation. But its opacity materialises, however, where the exhibition slips away: not in the sense when revealed, it would be deciphered as a figure covering its genesis, but precisely in the sense when it rejects access to the place from which it would be a matter of looking, but also at the point from which one should interpret and understand. The lamp then becomes the figure of inscription of a blind spot in the exhibition, it visually obliterates the surrounding pictures, it acts as a mask that crosses the panorama of the exhibition by rendering it blind. This mask, like an anti-portrait, faceless, inscribes a deletion in the representation device, so as to panic it by bringing it to its epitome: less by transgressing its limits and rules than by taking them to excess in order to disfigure the exhibition.

The act that the Undercuts exhibition intends to accomplish is the isolation of a lone, ghostly figure, appeared between two 'pocket' reversals: that of the animal nature, folded back over the picture (Contre-Dépouilles (Undercuts)), and that of the retroverted gaze on its other monstrous one, the mask (Soleil Inscrit (Inscribed Sun)). We could say that this single figure, this negative representation, is that which similarly haunts the zoo and the museum, and that these two tools of production and preservation of permanency are invented by working to forget this haunting. The spaces defined by the enclosure that are the zoo and the museum, by making two symbolic motifs of exteriority and intentionality out of the animal and the artist, present themselves both as a scene of origins, where the expression of sources is addressed to the public, and a detached place where the spectator can repeat an inaugural movement, to make the experience of a image that is presented as primitive, original. From this interstice that the zoo and the museum work to enclose, the exhibition Undercuts undertakes to impress a clean cut in the game of referential identities that traditionally links the image with its origins, to separate the objects from their identities, to address a lone figure rather than reducing it to a motif shared by all, to empty the interpretive frame in order to make it a fundamentally inscribed place: to be written, that is to say absolutely open.
Vincent Normand

(This exhibition is co-produced with Anna Lena)