Videos. The 9 artists presented on show come from a diverse society that is the focus of much discussion, and where everyone can express their own point of view of a common culture. Our aim in this exhibition is also to show this other aspect of Israel. 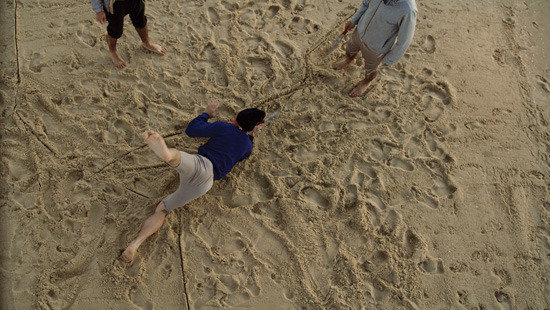 It is said that in an aesthetic conception of art, the language used must be universal. The different videos presented in the exhibition entitled "Là-bas" (Over There) show us that this is far from the case. The Other, whom we think we know, can actually be a perfect stranger, and the words he speaks can be nothing but incomprehensible noise. The anthropological function of contemporary art takes visitors into a far-off realm that they have heard of but never actually seen. "Là-bas" (Over There) gives us the opportunity to see with our own eyes, to experience participative observation, and to "pitch our tent in the middle of the village", to paraphrase the beautiful words of the father of anthropology, Bronislaw Malinowski.

"Pitching their tents" was indeed what thousands of Tel-Aviv residents did in the summer of 2011 to show their indignation vis-a-vis their leaders, and to state their desire to change the social system of their country. The nine artists presented in "Là-bas" come from a diverse society that is the focus of much discussion, and where everyone can express their own point of view of a common culture. Our aim in this exhibition is also to show this other aspect of Israel.

The exhibition takes us 'Over There'. It offers us the opportunity to experience what it feels like to be strangers, to come into contact with this 'other place', and to gain an insight into the complexity of its people.

Enter the "village" to the sound of pistols and discover Nira Pereg's 67 flamingos in a glass cage ("67 Bows, 2006"). The sound of the gun sets of a Pavlovian reflex, and they bow their heads. Soon, the gun is no longer necessary to set off the reflex. Nira Pereg offers a metaphor of human behaviour, which is sometimes conditioned to act without critical thought. But "67 Bows" also refers to the Six Day War in 1967. More than just showing the ridiculous behaviour of the flamingos, the video denounces the absurdity of human behaviour: men and women who, through lack of courage, engage in the folly of weapons.

During the Six Day War, Gaza ("Azza" in Hebrew) was annexed by Egypt. Sigalit Landau, who represented Israel at the Venice Biennale in 2011, has combined the names of Azza (Gaza in Hebrew) and Asheklon, an Israeli town. The towns both stand on the shores of the Mediterranean, and both shelter refugees: Muslims in Azza, North African Jews in Ashkelon. Sigalit Landau has chosen to bring together these two populations, brothers in terms of both their culture and their situation. He shows them playing a "knife game"; each player throws a knife into the sand and draws a new frontier based on where it falls. The game becomes a symbol for a dialogue that the artist would like to make possible between the two peoples. The game seems to have no end, like the ever-chenging borders. The video appeals to all our senses: the sound of the sea, the texture of the sand dug up by the knives. The aesthetic appeal of the images makes us forget the reality of human conflict and takes us into the world of happy summer games played by young people whose one desire is to live together.

Tel-el-Full, near Jerusalem, also stands in the sand. The palace filmed by Nir Evron in A Free Moment (2011) used to belong to the Jordanians; it was intended to be the summer residence of King Hussein. The concrete structure had only just been completed when the Six Day War broke out in 1967. Work on the building was halted and it fell into ruin, a ghostly remnant of a human project that would never be realized. Nir Evron's work clearly focuses on history: through genealogy or archaeology, the artist explores the many strata of a history that links generations together. In A Free Moment, he breathes new life into this magnificent monument overlooking the entire region, from the Dead Sea to the Mediterranean. To do this, he developed a complex image capture system where a robot equipped with a 365° mobile camera moved along rails filming from every possible angle. This POV movie takes us into to bowels of the building itself. The simplicity and emptiness of the place contrast sharply with the sophistication of the filming device.

Concrete also forms part of Rona Yefman's work, but her aim is to move walls in order, literally, to push her way through the society in which she lives. She believes that all dividing lines must be moved. In her video "Pippi Longstocking" (2008), Rona Yefman revisits the famous children's book of the same name by Danish author Astrid Lindgren by dressing up in the eccentric guise of Pippi Longstocking. Like Lindgren's fictional character, who has superhuman strength, she attempts to move the "Separation Wall" with touching naivety. She deliberately approaches the political and controversial reality of the Wall in a light-hearted way. The artist seems to refuse to grow up and accept reality, and the viewer becomes a powerless witness to a desire for change that has turned into a childish utopia.

Yael Bartana belongs to a generation of artists who have lived through several wars and spates of suicide bombings. Since 1953, the State of Israel has organized an annual two-minute silence during which the country comes to a standstill in memory of the soldiers killed in the fighting. The tradition of "Yom Hazikaron" (day of memory in Hebrew) is still alive today, and it is this special moment that Yael Bartana focuses on in "Trembling Time" (2001). The artist, standing on a bridge overlooking a motorway to the north of Tel-Aviv, films the dense traffic. When the Yom Hazikaron siren sounds, all the card stop for two minutes of silent communion. Tel Aviv, reputed to be "the city that never stops", grinds to a halt. Repeated every year, this commemoration decreed by the authorities has gradually spread throughout Israel. In Yael Bartana's video, thanks to her subtle treatment of shadow and light, sound and silence, and motion and stillness, this moment of collective memory is invested with great emotional power, dramatic force and, ultimately, solemnity.

Night and suspended time are also themes in "Last Watch" (2010) by Talya Keinan. The black mountain that she has painted on the wall of the museum is as much about darkness impinging on light as about tiredness overcoming the body. At the summit, just before sleep, there is a special, almost sweet interlude. In this place and at this precise instant, Taylia Keinan has chosen to insert a video of an open-air concert that did actually take place at the top of a mountain. Time is suspended. The singers disappear and reappear in the darkness, as if to signify the magic or the extreme fragility of this special moment where dreams and reality can mix.

Tom Pnini's mountain is volcanic. He draws inspiration from his own history; the son of a famous actor, he has decided to focus on the theatre in this work. He plays with the idea of illusion, and sets out to show all the facets of the theatre at once: stage and wings, audience and actors, costumes and sets. For Volcano Demo, as for other works, he has built a model from papier mâché, using a theatre set he filmed before destroying it. He placed this giant erupting volcano on the roof of his parents' apartment in Tel Aviv. This work is all about mixing things together: professional and private life, reality and staging, and so on. The entire work, filmed from four different angles, adds to the dramatic, even apocalyptic nature of the situation. Volcano Demo works as a metaphor for the Israeli spirit, where unconscious drama blends with conscious drama, and where everyone feels a deep-seated sense of anxiety about both past and impending disaster.

Daniel Landau is also interested in the social aspects of Israeli life. In his video Not Very Nice People, he transgresses the taboo of integration and the way immigrants are treated, and more generally addresses the subject of how others are rejected. The country has been built from successive waves of immigration, and each time the same scenario has been played out. The last to arrive are considered as foreigners and are despised and sometimes violently rejected by those who have been in the country for longer. The same goes for people whose differences are held up to ridicule. Not Very Nice People is a fictional documentary on four people living in a building in Holon, a suburb of Tel Aviv. Each represents a stereotype forming part of the Israeli mosaic. Each tells us about his or her daily life and talks about how they feel about the social conditions and crazy things that can happen in contemporary Israeli society. They also talk about how they have been rejected, and how hard it is to find a place in that society.

Beyond the complexity of political reality and social issues, everyone dreams of helping to create a better world. Gaza Canal (2010) by Tamir Zadok is the story of just such a utopian dream. It is a futuristic fictional documentary where a peaceful solution to the Israel-Palestine conflict is made possible thanks to a gigantic engineering project making Gaza into an island by digging a huge canal between the two territories. Tamir Zadok plays with the genre of propagandist documentary, and his film takes the form of an advertisement for the "Canal Visitor Center", proudly showing off the benefits of the project. He imagines all the future advantages of building the Gaza Canal in terms of employment and the environment. Gaza Canal demonstrates an alternative to the tragedy of Gaza, showing how all the energy that has been invested in the conflict or its resolution might be used in a shared project that would give everyone a sense of pride in shaping their history, instead of a feeling that they are its sad victims.

This exhibition tries to show another reality that is Israel. "Là-bas" refers to a population to which these artists belong and which challenges and calls into question the society they live in. The videos presented here seek neither to apportion blame nor to provide excuses; instead they place us face-to-face with our responsibility for our own lives. The Israeli writer Amos Oz suggested "divorce" and the creation of two states side by side: a situation where there would be no obligation to love each other, just an obligation to coexist and to respect all aspects of the Other, including his inaccessible "foreign-ness".

Wherever "Over There" happens to be, the "Others" who live there know things that we can never know. Contemporary art, in its anthropological role, reflects society in the most direct, sensitive way possible. Are artists not artisans who dare to fashion their works based on the secrets of our lives?

What we find "over there" is certainly not an illusory understanding of others, but the opportunity to draw the energy we need to resume our own journey from the inspiration of the artist.

We can then take down our tent and return "home"; but our spirits will have been transformed by the experience.

Organized with support from the Cultural Service of the Israeli Embassy in France.