Elodie Pong, Sylvia Sleigh, Loredana Sperini. Questions about existential truth appear, for which the image of a mirror always has been used. But the artists also touch sociological and historico-cultural questions and the possible answers are hoped to be found in the reflexive shine of the glass. 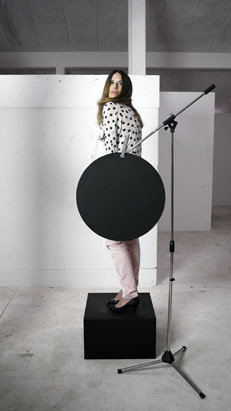 «Even the greatest stars find their face in the looking glass»
(Hall of Mirrors, Siouxsie & The Banshees)

Mirrors and mirroring are traditional motifs within the different arts. For the most part they are used to negotiate self-reflection and beauty, but often also as a stylistic device to expand the space within a picture or to direct the view to something hidden, to a secret.
In the works of the three artists in this exhibition, mirrors and mirroring are used in different ways and with different intentions. Questions about existential truth appear, for which the image of a mirror always has been used. But the artists also touch sociological and historico- cultural questions and the possible answers are hoped to be found in the reflexive shine of the glass.

Maybe the paintings by Sylvia Sleigh (1916, UK - deceased 2010 New York City) are the most explicit ones in showing how the doubling of the motif through a mirror always adds a particular note to the mirrored. Might it be her self-portrait, or might it be another sitter - the person depicted is always slightly altered in the mirrored image, the posture has been moved gently, the facial expression appears changed. Often these mirror images seem like a commentary on the character, at least in the sense that ‚another‘ character is brought out. In Sleigh‘s paintings this can come across very playfully, but within a constant search for truth this can virtually converge with the uncanny.

The other is always part of any reflexion and part of the look into the mirror. Loredana Sperini‘s (*1970 IT, lives in Zurich) abstract wax paintings seem as if they find themselves again within the other, the unknown. Numerous fine layers of different coloured wax create an enormous depth of the paintings. The loose, partly geometrical, partly amorphous forms of the colours seduce the view into this other world behind. It seems as if the wax paintings linger in the inside of the mirror where new forms yet might arise.

These new forms can also refer to an analysis as for example Elodie Pong (*1966, USA, lives in Zurich) debates in her videofilms. She on the other hand leaves out the mirror as an evi- dent motif and rather presents the reflexion of the mirrored image directly. In this way she raises existential questions about identity and habitus and tries to capture them in allegorical images.

Another element becomes recognisable in Pong‘s work that all three artists work with, that is the explicit art historical and historico-cultural embedment of the works. It always also comprehends a continuation and questioning of the reference models. Pong picks bequeathed postures and poses from film-, pop-, and cultural history, these poses are quoted, indicated, slightly moved. Sleigh not just always quotes well-known art pieces from art history, she also displaces bequeathed expectations on female artists of her time. For example many a time she chooses male nudes as motifs and she portraits almost solely female artists to give them visibility and an image. At the same time a particular attentiveness of hers lays in the materiality (as for Sperini), the cloth, the decorative elements of the painting. One can consi- stently recognize her love for details in the execution of the physical quality of the furniture, the clothing, the interior. And many a time the decorated background conquers the attention from the eventual portrait of the painting. This takes place with much easiness and with a glimpse in the eye for sure, so that her approach can be considered as an affirmation and at the same time as a relaxed estrangement from the traditional attribution to female artists. «The artist is living in the mirror with the echos of herself»