Off the beaten track

The group exhibition thus unifies the intimate moment in the studio with the manifested, real exhibitional context through a personal, profound glance into the respective artistic expression. 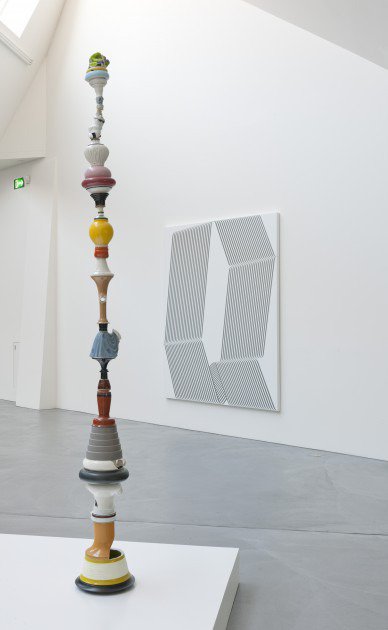 The moment an idea takes shape, a concept is developed or a work is born, seems to me one of the most precious. As long as something exists as an idea, it is vague and fragile. Through its realisation, however, this fragility gains clarity; it becomes concrete and tangible. When an idea ultimately receives resonance – in art that would be an audience – its existence is completed by the perception it gains through it.
The aforementioned vagueness and fragility of the as yet immaterialised ideas, also turns a visit to the studio into a special moment in the process of exhibition-making. In the studio, new works are created, old and rejected items are taken up again and ideas take shape.

The English expression off the beaten track is used in a spatial-geographical context of remoteness. In the sense of “displacement”, “far fetched”, or “peculiar”, the expression can often be metaphorically used and serve many descriptive purposes. Whether it is in the perception of an object, a piece of architecture, a location or an action, again and again we come across things that irritate us despite a given context that is known to us. Something may be different, even though we know it: astoundingly new, somehow strange, surprising or perhaps even shocking.

The group exhibition off the beaten track thus unifies the intimate moment in the studio with the manifested, real exhibitional context through a personal, profound glance into the respective artistic expression. Secret, rejected and unfinished works, snapshots or things from earlier phases of creativity come to light. Confrontations of two respectively coherent works are created in dialogue with the artist, which once they are coupled together, become divergent. Off the beaten track therefore contains both the familiar path and also the rough terrain. A generally known work, a work with so-called recognition value is contrasted with the non-concordant and unusual. The idea of an artistic signature, of a consistent line as an important characteristic of quality in the art world is scrutinised. The immediately recognisable is not of interest; rather, it is the astonishing and surprising, the new and the different. With the realisation of off the beaten track, a test of courage is associated with daring to go on shaky ground; more precisely, on rough terrain, and then to exhibit it anyway.