Graduation shows Piet Zwart Institute Master Fine Art and Master Media Design and Communication. 'A Map of Misreading': 11 international artists working across a range of media present an investigation of the genealogy of poetic influence. 'Exception Handling' showcasing work that ranges across a triptych of short films to radio broadcasts of encrypted narrative, to steam powered analogue 'holograms,' with many other media-hybrids in-between. 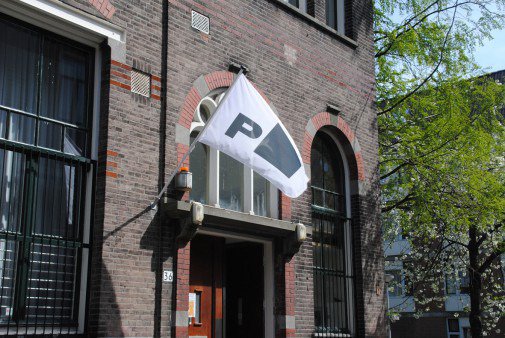 A Map of Misreading

Eleven international artists working across a range of media present their graduation projects and a program of performances. This exhibition, which borrows its title from literary critic Harold Bloom’s book, A Map of Misreading, is an investigation of the genealogy of poetic influence.

Bloom suggested that all poets struggle (consciously or not) with the influences of their precursors. His analysis of poets’ rebellion against the overwhelming presence of respected luminaries and literary works starts from the act of creative (mis-) interpretation or misreading in order to create a productive relationship with texts. For Bloom, influence accrues through the critical misreading one undertakes while striving to translate influence into one’s own work. This graduate exhibition misreads Bloom’s line of thought and further displaces it into the field of contemporary art. Setting aside the dominant revisionist and referential tendencies that have recently emerged, it asks: how does one situate one’s own artistic voice amongst a myriad of influences and sources, both past and present, which are instrumental to one’s own artistic formation?

This exhibition attempts to chart the convergences and bifurcated pathways of these artists, and highlights how both mutual and personal artistic influences shape their artistic realities. In addition to individual artistic investigations informed by personal histories and biographies, events, symbolic structures and mass culture, the graduating Master of Fine Art students at the Piet Zwart Institute share a strong collaborative ethos that could also be interpreted through the lens of Bloom’s thesis.

Lars Brekke's videos can be seen as research and development of phenomena appearing as inappropriate to the anthropocentric view.
In Edward Clive’s hometown Yeovil, in the southwest of England, the 1930’s Odeon cinema was recently converted into a sofa and bed emporium. Clive is using this co-opted architecture as an organising model to create a set of display units that will house a collection of prop sculptures and un-peopled videos.
Edmund Cook presents a specifically designed installation housing a two-channel video that depicts an unwinnable argument about whether bodies are objects or not and where such boundaries begin.
Catarina de Oliveira’s performance The Chronicles of the Blue Crab is based on written dialogues between two characters, Sasa and Zamani. The Chronicles of the Blue Crab was created (in part) at The Watermill Center – a laboratory for performance (2012).The work will be performed during the opening and throughout the course of the exhibition.
Toon Fibbe’s videos looks at figures from popular history who were marginalized in society for being perceived as different, while this difference propelled them to local fame. Using the context of the graduation show at TENT to think about her previous encounters with spaces and texts again, Jane Fawcett has produced ergonomic 'pods' which will provide the visitor with material to think through these interior readings with her.
By opening up for the unfiltered and direct, and to investigate the possibility of self-deception, projected narratives and alternative realities, Frode Markhus’ paintings attempt to open up for unstable and curious outcomes, and to smuggle the Id-worlds naive desire beyond the Ego override.
Interested in constructing ambiguous narratives that combine and layer found objects, tense personal anecdotes and deliberately inaccurate reading of research material, Fran Meana’s video installation investigates the construction of historical narratives and the questioning of temporal structures.
Since Anouchka Oler's birth, she has lived in approximately 11.5 different houses that resulted in her attachments to objects that moved with her rather than the homes where she grew up in. Since moving to Rotterdam, she has made and trained a team of sculptures which will appear in the exhibition in a specifically designed space which will evoke a animistic intimacy with these objects.
Kirsty Roberts makes work which explores the possibilities of inhabiting a character; she uses her mother, the idea of a gardener or a renaissance warlord as a mental model for production.
Change Partners, a series of modular sculptures made collectively with Rachel Koolen will be used as containers or a set, for a yodeling opera, a radio play, and a fashion launch. Deniz Unal work comprises a video project starring her mother, entitled Mum Can Clean and a collaborative project entitled Orals; with its most recent incarnation being Orals TV, a 30minute TV show that will be performed during the exhibition period.

The exhibition A Map of Misreading is accompanied by a publication featuring contributions by graduating students and the curator, designed by Julie Peeters and Joris Kritis.

Compiled by Simon Pummel in cooperation with Willie Stehouwer

The show brings together the previously distinct disciplines of Networked and Lens-Based digital media and presents work across an expanded range of disciplines. To reflect this new breadth or media practice within the department, the graduation show is an ambitious co-operation between TENT, V2_Institute for the Unstable Media and WORM: showcasing work that ranges across a triptych of short films to radio broadcasts of encrypted narrative, to steam powered analogue 'holograms,' with many other media-hybrids in-between.

Exception Handling is a term for a particular procedure in writing computer code: Wikipedia defines it as, "The process of responding to the occurrence, during computation, of exceptions – anomalous or exceptional situations requiring special processing – often changing the normal flow of program execution".

It is the recognition of the anomalous and exceptional, and the devising of a 'special processing' that becomes the theme that threads through the work of the artists exhibited. In each case the artists seek to create a media language that allows situations ranging from the most personal and intimate to the most widely political to be researched, explored and embodied in a media object that addresses the uniqueness of the topic. These projects all seek to "change the normal flow of program execution," and avoid mirroring the deafening barrage of cliché that forms our media landscape.

With his observational video portrait Daan Bunnik addresses the changing perceptions he has of his parents and of his hometown. In this project he expresses with an intimate and poetic voice the difficulties concerning letting go of and simultaneously holding on to the environment one grows up in.
Sebastian Cimpean’s [re]describe is an audio-visual immersive installation that focuses on re- drawing physical spaces. This visualization presents glimpses of the recognizable amidst an array of abstract images sourced, manipulated and generated from physical spaces.
Anchored by the improvisational aspect of Inge Hoonte’s practice, She connected two projects that constantly adapt to, and define their surroundings. ‘Under/Up the Stairs’ investigates the transitory, in-between nature of staircases, aiming to connect the people present. ’A Voyage of Discovery’ is a factional travelogue of her journey from the fictional places Philosophical Starting Port to the Island of Confirmation.
The videos Laura Macchini uses deals with topics such as sexual abuse, sex change operations, cancer, drug related problems etcetera. The goal of this installation is to explore the patterns of confession in video blogs, to create multiple environments for the visitor to experience those videos in different ways.
In the installation ma(n)chinery, Luis Soldevilla presents a visual orchestration of machines, people, gears, interfaces and devices, working together for a sort of superior organism. An up- to-date city symphony film rendered through the intricate beauty of an assembly line. In her work, Loes van Dorp is playing with space and time, how to show different times and different worlds in one image. This short animation film Framed Memory will visualize how a women deals with her memories, when returning to her childhood house after the death of her father.
Amy Sou Wu’s Mood Radar is a personal weather forecasting system based on your mood presence. Acting as your own personal weather forecast chart, the map reveals how you will experience the weather tomorrow.
Zhang Yan invites audience to sit around a dining table, and have a bite of traditional Chinese culture and food. Yan picked up food in Five Colors, red, yellow, blue-green, white and black from the Five Elements philosophy, to create A Recipe of Harmony. According to the stories and symbolism of each food, she made four harmony ingredients, which are Love, Regeneration, Peace and Balance.

The exhibition is accompanied by a publication designed by Daphne Heemskerk featuring contributions by graduating students, staff and guest tutors.