An orchestrated selection of objects which, when brought together, propose to question the power of context, both implicit and constructed, as a filter for determining and influencing our way of looking. 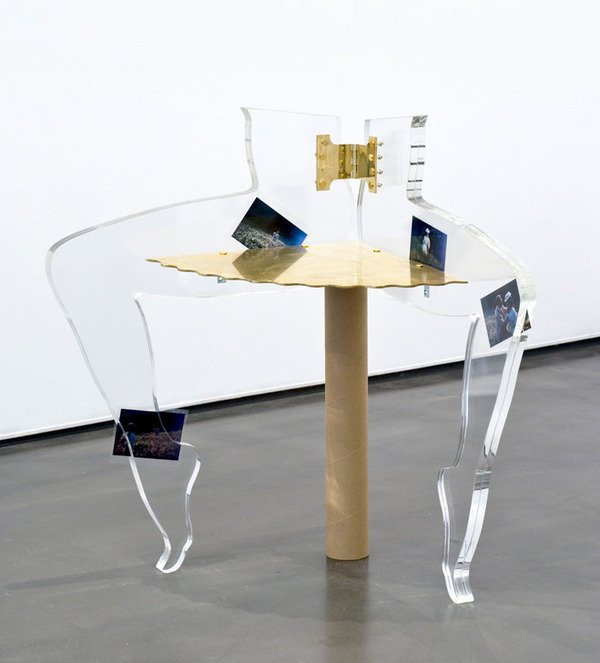 Utopias are sites with no real place. They are sites that have a general relation of direct or inverted analogy with the real space of Society. They present society itself in a perfected form, or else society turned upside down, but in any case these utopias are fundamentally unreal spaces.
Michel Foucault, Of Other Spaces, 1967

Glaze presents an orchestrated selection of objects which, when brought together, propose to question the power of context, both implicit and constructed, as a filter for determining and influencing our way of looking. Glaze is an exploration into the effects of physical, architectural and atmospheric, context on artworks and the way in which artists can create their own contexts through their work. If these contexts might be thought of as a ‘glaze’ through which we see artworks, then the title also indicates an attention to details of surface, decoration and patina that is explored throughout. Each artist’s work confronts the very physicality of the gallery space; walls will be directly drawn upon, objects will be placed in direct relation with one another and each spatial plane; the floor, wall and ceiling will be employed. Located somewhere between Foucault’s principles of Heterotopia and minimalist thinking around the activation of space, Glaze presents an opportunity for reflection on private, public, social and cultural spheres of ’useful’ space — when the functionality of an object is negated or interfered with by the artist.

Originally inspired by and furthering the ideals explored in the work of minimalist artists in the 1960s, Glaze is conceptually anchored by a Carl Andre floor sculpture which, fabricated from industrially pressed iron and deliberately placed onto the ground — and thus de-sanctified, rather than elevated on a plinth — brought about a significant shift in thinking of the hierarchal nature of art objects. This one simple gesture set a precedent for a specific way of thinking which has endured today, and which all the artists included in Glaze have explored in varying ways within their practice. This second incarnation of the exhibition offers an opportunity to build on ideas addressed in the original show and move beyond an analytical exploration of gallery context into questions surrounding lifestyle and the functionality of artworks: what we ask from artworks and which roles we expect them to perform in our everyday lives. The gallery becomes a playing field for these ideas and is seen by the curator as a space moulded by our needs: domestic space becomes a symbolic reference point for how the works are presented. The new addition of a Marc Camille Chaimowicz’s furniture piece (Coiffeuse (peut-être pour adolescent), 2008) to Glaze is indicative of a slight change in key for the show, and sets a stylistic tone for the rest of the exhibition. As an artwork that sits somewhere between a domestic product meant for use in the home and art object, its hybrid form and wonky aesthetics appear alien in a gallery, and hence flip the viewers’ attention onto the surrounding space, putting everything in the show onto an uneasy footing. Both this work and Carl Andre’s floor sculpture (Glarus Brass 11 rectangle Row, 2007) explore varying approaches to art objects, within domestic and institutional spaces, and though stylistically the two works seem far apart, both are engaged in questioning the hierarchy and status of certain objects.

Furniture is a recurrent signifying theme in the second instalment of Glaze and is a direct attempt to anchor the show in the everyday. Anthea Hamilton’s Leg Chair (Room with a View), 2009) has a direct relationship with Chaimowicz’s furniture piece, though the propositional functionality of this piece is more extreme, leaving the viewer with lingering questions regarding its status. The work consists of a chair made out of a pair of open Perspex legs modelled on the artists own, curiously enticing the viewer to activate the work, and yet the confidence of this work flippantly and successfully pushes the focus back onto the viewer. The early wall hangings of the Support-Surface artists Patrick Saytour and Claude Villat (Pliage Rayé, 1969, Claude Viallat, Sans Titre, 1976) are not only practical inclusions in the show, in that they cover the surface of the gallery space — a methodology used by Longly to address the physical parameters and surface of the gallery context — but through their bold use of pattern and structure. Longly wishes to connect to the ethos of Support-Surface; a movement that is not characterized by a particular style but rather an approach that gives equal importance to the materials, creative gestures and the finished work, an almost homespun approach to artistic production with pattern and motif more akin to the stylistic, surface-heavy emphasis of postmodern design. As the show is an exploration of the pitching of sentiment via the attributes of surface (the glaze of an object) the exuberant and perverse methodologies of postmodern design ethics is a useful and recurrent theme in this show. Glaze presents a proposition to its audience; one without a single dominant prevailing theme or focus, but rather a series of interconnected questions and concerns — a precise selection of works which, whilst certainly retaining their individuality in juxtaposition with other works, become something new, and perhaps, unexpected.