Motivated by the writing of John Ruskin, Thorpe considers the profound pride of the artisan in his craft. 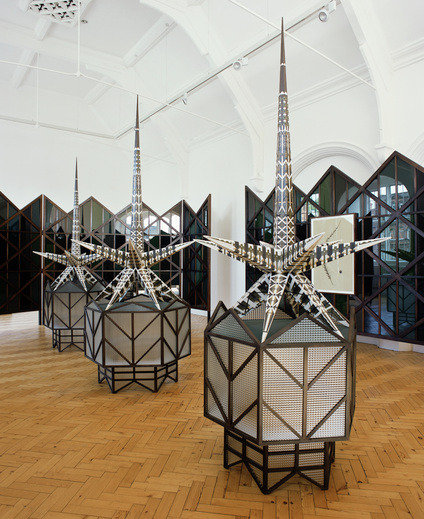 Maureen Paley is pleased to present the fourth solo exhibition by David Thorpe.

Thorpe’s installations are painstakingly constructed through complex layering processes where the objects are dressed and hidden. Each piece is ornately detailed and meticulously rendered, honouring traditional methods of handwork, where there is a close relationship between the maker and his object. Motivated by the writing of John Ruskin and in opposition to Thomas Edwards, Thorpe considers the profound pride of the artisan in his craft. There is a continual attempt to restore or develop a sense of independent dignity attached to materials and objects.

Works such as A Rare Beast are constructed in the traditional ‘Wattle and Daub’ style. Latticework of split-hazel branches, layered with lime plaster and mud, are ornately finished with a forestry pattern in the tradition of the Arts and Crafts. The stylised pattern is the focus of Thorpe’s work. This piece will emanate a low audio hum so that the object performs and asserts itself in the presence of the viewer. Thorpe’s work engages with the radical spirit of the vanished artisan, with an atmosphere that lingers somewhere between a historical lament and a futuristic revival.

Maureen Paley
21 Herald Street - London
Open from Wednesday to Sunday 11.00 am – 6.00 pm and by appointment