"Everything can be done, in principle" by Brian Duggan is a visual art installation of spectacle, scale and participation, seeking to engage all within. In "Vanishing Carlow" viewers of James Fennell's photographs will be able to listen to recordings of the original audio interviews conducted by Turtle Bunbury. Anthony Lyttle is Eigse's 2012 selected '059' artist and he creates a series of large-scale drawings and inter-related smaller works on paper. The most recent works of Alice Beresford are printed onto aluminium and use neon lighting to frame and illuminate. 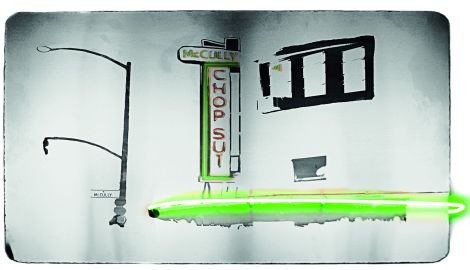 Brian Duggan
Everything can be done, in principle

"Everything can be done, in principle" will bring to Carlow a Visual Art installation of spectacle, scale and participation, seeking to engage all within. This timely collaboration marks a watershed moment for Irish arts and the cooperative potential that communities hold as a vital resource.

In an invitation to inhabit a story, and its cinematic interpretation, from 122 years ago, Brian Duggan’s work Everything can be done, in principle transports the public into a timber and canvas barn at America’s mid western frontier, at the time of the Johnson County War in Wyoming.

Duggan asks participants to roller skate in costume, to imagine the joyfulness of community, against the backdrop of dirt and corruption, in this portal in VISUAL’s extraordinary Galleries, just as the communities did in Michael Cimino’s Heaven’s Gate (1980).

Within this new commission, Duggan recognises the resilient human spirit in powerless communities and its standoffs with official power.

Cimino's film Heaven’s Gate is a film which broke the rules and supported true art through an often ruthless pursuit of authenticity, even to the extent of challenging the prevailing powerful studio system. Often seen as the beginning of money men era, Heaven’s Gate marked a changing moment for maverick auteur film directing and the role of the producer. It also branded the Western in clear class-struggle, selected social agenda terms.

Artist Brian Duggan (b.1971) lives and works in Dublin. His practice examines the prevailing conditions when things go wrong, and the sites of stress and breakage. Citing well known historical events as well as the overlooked small dramas of the everyday, he brings physical challenges into the gallery to ask questions, to exert pressure and to push boundaries.

The Vanishing Ireland Project began in 2001 when writer Turtle Bunbury and photographer James Fennell began to interview people of senior vintage in and around their homes in County Carlow and Kildare.

In 2003, they embarked upon the first of many extensive tours of Ireland to chronicle a world that is rapidly disappearing. They have now produced three volumes of the ‘Vanishing Ireland’ series.

This exhibition brings to VISUAL six extraordinary characters from this series – all from Carlow, and two still with us - and for the first time in the history of this project, viewers of James Fennell’s photographs will be able to listen to recordings of the original audio interviews conducted by Turtle Bunbury.

This exhibition is curated by Denis Roche.

Anthony Lyttle is Éigse's 2012 selected '059' artist and he creates an immersive space within the gallery by making a series of large-scale drawings and inter-related smaller works on paper.

Central to these drawings is the physical process of making, which involves the endless repetition of the same mark and the ensuing rhythmic energy of repetitive action.

As the drawings evolve, a shadow image forms and assumes a visual influence of the picture plane, resulting in a play of balance between the dominant and the recessive. Obscuring and camouflaging becomes the preoccupation in building a density of marks on the surface of the delicate paper.

Anthony Lyttle was born in Kenya, spending his childhood there and in Ethiopia before moving to Ireland in his teenage years. He studied Fine Art at NCAD and he did his MA in Fine Art Painting at Central St Martins. His most recent exhibition was ‘The White Mark’ at the Cross Gallery (Dublin) in 2011. He currently lives in Killedmond in Co Carlow.

Alice Beresford is an artist who uses photography as her medium, but experiments with alternative processes with which to show it.

Her most recent works are printed onto aluminium and use neon lighting to frame and illuminate.
These six works are all rooted in Americana, her images lifted from streetscapes encountered during travels made in the last two years through Hawaii, California, Nevada, Utah, Arizona and New York.

Incorporated her penchant for neon into classic images (“pushing the familiar but allowing the viewer to have a real sense of space and place”), she achieves a wonderful, theatrical result. She is based between London and Co. Wicklow in Ireland, but gathers most of her material from travels abroad. She trained formally in New York at Parsons School of Design and with commercial photographers in Dublin. She has had solo exhibitions in Dublin and London.

June 8th: a musical performance on the opening night by David Mansfield, the original composer for the film Heaven’s Gate.

8th June 4pm - 5.30pm Panel Discussion with Pat Cooke and Aine O’Brien
This will be followed by the Opening Night reception at 6pm. skating will be free on the opening night until 7. after which will be music and very short speeches, till 9.