Ovi Bimba is a major exhibition of important and rarely seen works by painter, sculptor, poet and Dada pioneer, Hans Arp: over seventy works ranging from wood reliefs and collages to lithographs and bronze sculptures. 'Selected Drawings 1984-2012' is the first survey exhibition dedicated solely to the pigment drawings of New York-based artist Roni Horn: whether semi-conical, semi-pyramidal, or semi-rectangular, the objects waver between easily identifiable geometric forms and abstract volumes. 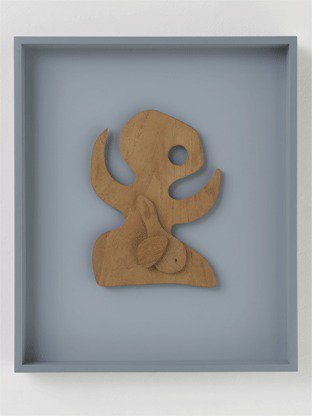 For its first exhibition back at the newly renovated Löwenbräu brewery building, Hauser & Wirth is proud to present 'Ovi Bimba', a major exhibition of important and rarely seen works by painter, sculptor, poet and Dada pioneer, Hans Arp. Curated by renowned Dada scholar Juri Steiner, 'Ovi Bimba' features over seventy works ranging from wood reliefs and collages to lithographs and bronze sculptures. The exhibition positions these diverse pieces alongside those of Arp's fellow artists, including his wife, Sophie Taeuber-Arp. In addition to providing a selective overview of Arp's enigmatic practice, 'Ovi Bimba' furthers the gallery's longstanding commitment to presenting museum-quality exhibitions of contemporary and modern masters.

Focusing his attention on everyday objects, Arp created his own unique 'object language' using a nonsensical vocabulary: plate, fork, knife, clock, tie, moustache, lips, breasts. With a playful hand he juggled the dominant art currents of the early 20th century, combining seemingly contradictory geometric and organic formal idioms with the artistic '-isms' of his epoch. 'Ovi Bimba' explores the development of Arp's 'object language', tracing the artist's practice from the first decade of the 20th century to the 1950s and focusing upon his time in Zurich where he co-founded the Dada movement in 1916.

Throughout the 1910s and 1920s, Arp illuminated the Dada journals of his colleagues with abstract gestures and figures, elevating randomness to the stature of a design principle. His works were painted, printed, cut, or torn and his pasted collages were arranged 'according to the laws of chance'. A selection of these works on paper, highlighting the principles of spontaneity so imperative to the Dada movement, will be shown in 'Ovi Bimba'.

Turning his back on the increasingly modernised, turn of the century society, Arp created biomorphic works whose organic, amoeboid forms highlighted his fascination with the physiological processes of procreation, growth and death and counteracted the rectilinear structures of Cubism. Arp studied the mineral, vegetable, and animal worlds for inspiration and, in works such as the wooden sculpture 'Plan Surélevé dit "Tables-forêts"' (c. 1926 – 1931) and the relief, 'Rencontre (Encounter)' (1934), Arp documented the evolution of an imaginary world. Combined with his late bronze sculptures from the 1950s, these works sought to give form to natural forces – clotting, hardening, congealing and fusing – all of which were symbols of eternal cycles in nature for Arp.

In the 1930s, the Zurich-based art historian Carola Giedion-Welcker recognised the relevance of Arp's vision of nature, and saw in his works the 'invisible made visible, the search for a visual language capable of capturing the spiritual realms beyond the world of appearances'. Arp's innovative and influential practice prefigured the Fluxus movement, inspired artists such as Anthony Caro and Joan Miró, and made way for the great contemporary performance artists.

Born to a German father and a French mother in 1886, Arp studied briefly in Germany and Paris and then, just as World War I was beginning, moved to Switzerland where he played a crucial role in the beginnings of the Dada movement. Also known for his experimentation with Surrealism and Constructivism, Arp developed a multifaceted practice including painting, collage, sculpture, reliefs, print and poetry. Works by Arp are shown in numerous major institutions internationally, including the Guggenheim Museum, New York NY; Museum of Modern Art, New York NY; Tate Modern, London, England; Centre Georges Pompidou, Paris, France; Kunstmuseum Basel, Switzerland; Kunsthaus Zürich, Switzerland; San Francisco Museum of Modern Art, San Francisco CA; and Hirshhorn Museum and Sculpture Garden, Washington DC.

Juri Steiner is a Swiss-based art historian, freelance curator and expert on Dadaism. From 2007 to 2010, Steiner was director of Zentrum Paul Klee. Prior to this position, he co-curated the Swiss Pavilion at the World's Fair in Japan (2005); and oversaw the Arteplage mobile du Jura at the Swiss National Exposition, Expo.02 (2000 – 2002). Steiner has co-edited numerous exhibition catalogues and scholarly publications on classical, modern, and contemporary art and is a member of Swiss Television's Literaturclub and Sternstunde Philosophie.

'If you were to ask me what I do, I would say I draw – this is the primary activity and that all my work has this in common regardless of idiom or material'
– Roni Horn in a letter to Paulo Herkenhoff, 2003

Hauser & Wirth is proud to announce the first survey exhibition dedicated solely to the pigment drawings of New York-based artist Roni Horn. Ranging from early pieces which showcase Horn's initial experimentations with pure pigment and varnish to new and intricate, large-scale drawings, these works move beyond the limitations of their medium and instead explore the materiality of colour and the sculptural potential of drawing.

In the mid-1980s, Horn made her first drawings using pure pigment and featuring groupings of un-even shapes. Whether semi-conical, semi-pyramidal, or semi-rectangular, the objects waver between easily identifiable geometric forms and abstract volumes. Each is densely filled with powdered pigment in gemlike shades of deep red, bright yellow and brilliant green. The pigment is not painted within the outlines of the shape; instead it is layered thickly on to the paper, mixing in small amounts of turpentine, and then adding varnish little by little in a laborious process which lends physicality and depth to the two-dimensional works.

An important feature of Horn's work is her sculptural and photographic explorations into the implications of repetition and doubling. Early drawings such as 'As VI' (1987 – 1988) also represent a two-dimensional investigation into multiplicity, perception and memory. 'As VI' depicts a group of tapered cylindrical shapes in a gradient of colour ranging from almost black to a deep red. Although similar at first glance and placed side-by-side, the shapes are not presented in a progressive or logical sequence. Instead, they have a built-in repetition, with minor variations that require the viewer to commit their time and attention to teasing out the subtle differences.

Horn's more recent drawings display a significant increase in scale and complexity. Each work is composed of separate drawings, or 'plates'. Horn first cuts these plates then stitches elements from them together, creating entirely new forms through continuous cutting and pasting. Light pencil marks are dispersed throughout the drawings, indicating the joins of different plates and recording names or random pairings of words. These annotations marked time like a metronome as Horn carried out her exploration of the drawing's expansive surface. In her essay in 'Roni Horn aka Roni Horn', Briony Fer described Horn’s work as 'complete with missing parts', capturing 'the sense of a total object that is all absorbing yet at the same time intractable in some way and, therefore, always incomplete. This refusal to deliver everything easily or quickly forces us to slow down and reflect: to hold on to that tenuous hold'.