The exhibition features two new films ('Continuously Habitable Zones aka C.H.Z', 2011 and 'Marilyn', 2012) displayed within a mise-en- scene that guides the visitor through the entire exhibition space by means of a choreography of sound and images. Curated by Sam Keller and Michiko Kono. 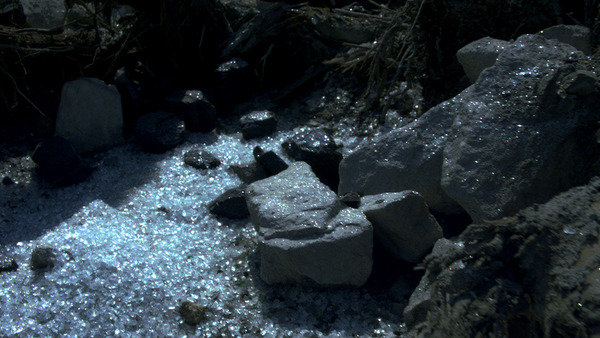 The French artist Philippe Parreno rose to prominence in the 1990s, earning critical acclaim for his work, which employs a diversity of media including film, sculpture, performance, and text. Taking the exhibition as a medium, Parreno has sought to redefine the exhibition experience by exploring its possibilities as a coherent “object” rather than as a collection of individual works.

For his show at Fondation Beyeler, Parreno presents two new films displayed within a mise-en- scène that guides the visitor through the entire exhibition space by means of a choreography of sound and images.

The first film Continuously Habitable Zones aka C.H.Z (2011) is linked to a territory, showing views of a black garden created in Portugal by Philippe Parreno together with the landscape architect Bas Smets. A landscape produced a film, and a film produced a landscape. The landscape is perennial; it is what the image rejects. The movement and position of the camera shaped and carved the landscape. There are no cuts in the film, merely the stretching and folding of space. C.H.Z stands for “Continuously Habitable Zones,” an astrobiological term used for planets offering viable conditions for life to grow. Recent scientific studies have shown that life would be more likely to develop on a planet with two or more small suns (dwarf suns) rather than on a planet with one very bright sun. In such zones the saturated photosynthesis would produce black vegetation. In C.H.Z. science and fiction meet. The landscape becomes an artwork that exists simultaneously in two worlds: C.H.Z. is a two-headed beast that lives in both a world of the moving image and the world of our physical reality. We are dealing with the making of a beast, something that can survive the conditions of its creation. The soundtrack consists entirely of underground recordings made with contact microphones and seismometers planted in the earth.

The second film, Marilyn (2012), shown for the first time at Fondation Beyeler, is the portrait of a ghost. The film conjures up Marilyn Monroe in a phantasmagoric seance in a suite at the Hotel Waldorf Astoria in New York where she lived in the 1950s. Phantasmagoria was an early form of cinema, a kind of circus act where conjurers would use eerie lighting and artificial smoke to summon up an ethereal apparition in an attempt to bring back the dead. The film reproduces Marilyn Monroe’s presence by means of three algorithms: the camera becomes her eyes, a computer reconstructs the prosody of her voice, and a robot recreates her handwriting. The dead woman is reincarnated in an image that is in fact an automaton, something resembling a human, something quasi-human.

The films spread like a virus throughout the Fondation Beyeler. The virus is transmitted to the spectator, but after a while it loses its virulence and ends up killing off itself. At the museum entrance visitors receive a DVD containing both films so that they can carry the exhibition out of the museum space. On the DVD the two films feature a musical soundtrack by Arto Lindsay. These versions sound different from the exhibited films, just as a memory can differ from reality. After the DVD has been viewed, the films erase themselves.

A room in the permanent collection of the Fondation Beyeler displays two new series of drawings related to the films. A series of about thirty ink drawings shows ten views of the C.H.Z. landscape. Another set of drawings are texts written by Marilyn's robot on Waldorf Astoria stationery. These drawings, altogether around fifty, are shown in two groups in a room that overlooks the water-lily pond.

Two Marquees designate the room where the films are screened. These works resemble the type of illuminated canopies that feature on theaters and movie halls. The two Marquees, created specifically for Fondation Beyeler, are made of steel, mirrors, and light bulbs and appear like luminous extensions of Renzo Piano’s architecture.

Finally, two sound installations give the spectator the impression that the museum is coming to life in the wake of Marilyn and Continuously Habitable Zones aka C.H.Z. The first installation carries the film soundtracks out of the screening room into the winter garden. For the second installation, sonic water lilies float alongside real water lilies in the pond next to the museum entrance, letting the sound of the “vegetal beast” in C.H.Z leak out into the garden.

The exhibition is curated by Director Sam Keller and Associate Curator Michiko Kono.

Philippe Parreno was born in 1964 in Oran, Algeria. He lives and works in Paris. He has recently presented solo exhibitions at the Serpentine Gallery, London (2010), CCS, Bard College, New York (2010), the Centre Georges Pompidou, Paris (2009), the Irish Museum of Modern Art, Dublin (2009) and the Kunsthalle Zürich, Zurich (2009).