'Reflecting Fashion. Art and Fashion since Modernism' unites more than 300 paintings, drawings, sketches, textiles, videos and photographs by such artists as Giacomo Balla, Sonia Delaunay, Joseph Beuys, Andy Warhol, Yayoi Kusama, Cindy Sherman, Stephen Willats and many more. David Ter-Oganyan is the winner of the Henkel Art.Award. 2011. He exclusively showes drawings - a practice that he understands as an immediate response and commentary to everything that he experiences and that moves him. during the day. 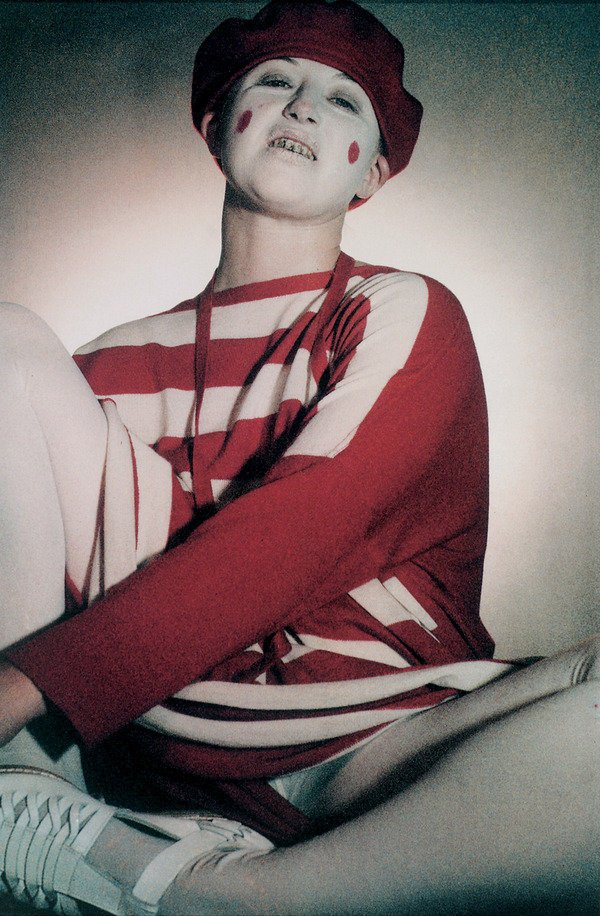 The convergence of art and fashion had already been fully developed more than 100 years ago. Today, they have combined together in a productive crossover that defines the creative expression of a new lifestyle. This summer, a comprehensive exhibition at the mumok will embark upon a journey through the history of art and fashion from early modernism to the present. Reflecting Fashion unites more than 300 paintings, drawings, sketches, textiles, videos and photographs by such artists as Giacomo Balla, Sonia Delaunay, Joseph Beuys, Andy Warhol, Yayoi Kusama, Cindy Sherman, Stephen Willats and many more. The exhibition will include works on loan from more than 70 internationally renowned institutions and private collections.

"Let there be fashion, down with art.”
Since Baudelaire (1821–1867) fashion has been considered to be the epitome of modernity. He understood them to be nearly synonymous describing them in terms of the ephemeral, fleeting and the possible. The modernization of society was reflected in the fashion consciousness of forward-looking artists, who at the same time promoted new progressive role models.
Sonia Delaunay (1885–1979) was a French-Russian painter and designer who worked both in art and in fashion in order to improve the image of the modern woman. The exhibition includes designs for her famous abstract fabrics. With the Futurists – especially Giacomo Balla – along with such artists as Sonia and Robert Delaunay and Sophie Taeuber-Arp, modernism became more colorful and diverse.
Beginning in 1914 with the design of an overall, Balla transformed the idea of the suit with ostentatious and dynamic reinterpretations. That Viennese modernism played a part in this break can be seen in fashion produced around the turn of the 20th century with Kolo Moser, Gustav Klimt and Emilie Flöge and individual positions within the Wiener Werkstätte.
Reflecting Fashion also develops the crucial role Surrealism played within the interplay between art and fashion. With his motto “fiat modes – pereat ars” (Long live fashion – perish art), Max Ernst claimed the ascendancy of fashion over art. The legendary fashion designers Elsa Schiaparelli (1890-1973) and Coco Chanel (1883– 1971) were closely associated with art.
An important moment was Schiaparelli’s famous “lobster dress” (Woman’s Dinner Dress, 1937), which she created together with Salvador Dali in reference to his “lobster telephone” (Téléphone-homard, 1936) that was first shown at the Exposition Internationale du Surréalisme in Paris in 1938.
Between 1939 and 1971, the Spanish artist designed four covers for Vogue, which also dedicated a series of photographs to the lobster-print dress.

“Everything will be art, and then nothing will be art...”
Fashion was popular in the innovative movements of the 1960s – Pop Art, Fluxus and Neodada. Performative and intermedial experimentation would increasingly define the artistic approach to the subject.
Especially the Pop Art icon Andy Warhol was a perfect example of how art, fashion, glamor and business could combine to form an artistic synthesis. Reflecting Fashion presents Warhol as a model and as a trendsetter.
Also represented in the exhibition are, for example, Yayoi Kusama’s Golddress (1966) made with pasta along with Christo’s oversized Wedding Dress (1967), which during a fashion show at an exhibition opening in Philadelphia was for the first time pulled through the room by a model, providing a critical and ironic commentary on fashion. A further important aspect is represented by feminist works by Martha Rosler, Sanja Iveković and VALIE EXPORT.

Contemporary Art and Fashion
The mumok exhibition documents how artists have worked together with designers since the beginning of the modernism, and how beginning in the 1980s, increasingly close connections were formed between the genres. The world of art and fashion would increasingly take on an important place in everyday life and develop into big business, as international collaborations between artists, designers and other creative professions gained more and more public attention.
The American photographer Cindy Sherman, also in the exhibition, worked with different fashion labels including Comme des Garçons, Issey Miyake and Balenciaga. Sylvie Fleury’s Formula 1 Dress (1999) produced by Hugo Boss played with the cult- object quality of Mika Häkkinen’s racing suit.
The Austrian artist Erwin Wurm created a sculpture for Hermès and Elfie Semotan - whose fashion photographs inspired some of Martin Kippenberger’s paintings – and who also has a long-standing working relationship with the fashion designer Helmut Lang.
Many contemporary artists, including Pawel Althamer, Milica Tomić and Maja Bajević understand fashion as an “art of memory” – where clothing becomes a tool or material. Born in 1967 in Sarajevo, the artist Maja Bajević sewed Yugoslavia together as a new dress in Dressed up (1999) and with this translated memory into the textile.

The exhibition was designed by Susanne Neuburger in collaboration with Barbara Rüdiger and will be opened in parallel to the Summer of Fashion in the MuseumsQuartier Vienna.

Catalog
The catalog of the exhibition is devoted to individual topics such as fashion and modernism, Surrealism and the 1960s, fashion and the avant-garde, and clothing and architecture. It includes a foreword by Karola Kraus and texts by Hans-Georg von Arburg, Elena Esposito, Silvia Eiblmayr, Elfriede Jelinek, Susanne Neuburger, Barbara Rüdiger and Angela Völker.

Exhibition
The exhibition display also deals with questions of fashion and was designed by the artists Julia Hohenwarter and Liesl Raff.

The winner of the Henkel Art.Award. 2011 David Ter-Oganyan was born in 1981 in Rostov-on-Don and currently lives in Moscow. The mumok will host his first solo museum exhibition which will later be shown in the Multimedia Art Museum, Moscow (MAMM).

Drawing as a means of immediate response
David Ter-Oganyan works with many different media. His oeuvre consists of paintings, drawings, object art, photography and video – in addition to collectively realized actions, installations, and various projects – including curatorial activities. At the mumok, Ter-Oganyan will exclusively show drawings – a practice that he understands as an immediate response and commentary to everything that he experiences and that moves him during the day. The breadth of the subject matter he deals with in these drawings is extensive, ranging from personal experience and existential reflections on art to the analysis of social and political life in Russia. Violence and the necessity of opposing it are central themes of his work. His formal repertoire is varied, including both abstraction and figurative representation. For several years, Ter-Oganyan has made most of his drawings on the computer and they are then transferred to different media, printing them on paper or canvas, or presenting them in slide-shows. The exhibition at the mumok includes a room-sized installation with multiple slide projections.

Critical-activist strategies
David Ter-Oganyan was an important protagonist of actionist-activist tendencies in Russian art during the 1990s and 2000s that were critical both of the art world and the political system. As part of the accompanying discourse on the relevance and potential of artistic work caught between social and political reflection, on the one hand, and artistic autonomy, on the other, he has taken a position that links the two poles in a unique amalgamation. Particularly his drawings show how activist-critical strategies can be connected to specific forms, based on reflections on the history of art.

Artistic education and development
His father the activist artist Avdey Stepanovich Ter-Oganyan, a central figure in the Moscow art scene during the 1990s no doubt played an important role in David Ter-Oganyan’s artistic development. Avdey Ter-Oganyan made a legendary performance in the exhibition hall Manege entitled Desecration of Holy Objects on December 4, 1998. During the performance, he chopped up photographic reproductions of religious icons to openly criticize the complicity of the church with political and financial power in post-Soviet Russia. The performance resulted in criminal charges being made against the artist who now lives in self-exile in Prague. Before this, Avdey Ter-Oganyan had run an art school in Moscow that his son also attended. Another person who played a formative role in David Ter- Oganyan’s life was the teacher, artist, theorist and political activist Anatoly Osmolovsky whose actions, exhibitions and manifestos were also made in opposition to the complicity of capital and power in politics and the arts. The magazine Radek – named after Karl Radek, onetime associate of Lenin – later became the name of the artist collective that worked together until 2004/2005 in which Osmolovsky, Avdey Ter-Oganyan and their students and other younger artists were active. David Ter-Oganyan was one of the principal figures in this group and instigated many of its activities.

Pussy Riot on the Cover
The drawing of the Muscovite feminist artist group Pussy Riot on the cover of his catalog can be seen as the expression of David Ter-Oganyan’s activist approach to art, as well as his conviction of the necessity of collective action. With their recent sensational and increasingly internationally covered performances, Pussy Riot has set off an important debate in Russia. On February 21, 2012, as punk rockers with masked faces, they sang “Holy Mary, blessed Virgin, be rid of Putin!” in the Christ the Savior Cathedral – a clear statement against the collusion of the Church and political power in Russia. Three of the artists suspected to have participated in the action have since been held in custody by the authorities. They face long prison sentences that are intended to act as a deterrent. 14 well-known Austrian art institutions including the mumok have expressed their concern in an open letter – with four more joining the list after its publication.

Catalog
The artist based his mumok catalog on magazines that Henkel produces for its employees and clients. It will be in German, English and Russian and will include forewords by Karola Kraus and Eva Badura-Triska (mumok) along with a comprehensive essay by Constantin Bokhorov.

Henkel Art.Award.
Since 2002, Henkel Central Eastern Europe (CEE) in cooperation with the mumok and KulturKontakt Austria has awarded the € 7,000 prize to artists working in central and eastern Europe.