Visions of Arcadia. The show explores the dream of a mythic place of beauty and repose and its enduring appeal for artists from antiquity to the birth of modern art. At the heart of this exhibition are three monumental canvases by Paul Cezanne, Paul Gauguin, and Henri Matisse, each a landmark. The 26 artists, many represented by ambitious mural-scaled works, include Henri Rousseau, Pablo Picasso, Robert Delaunay, and Georges Seurat. 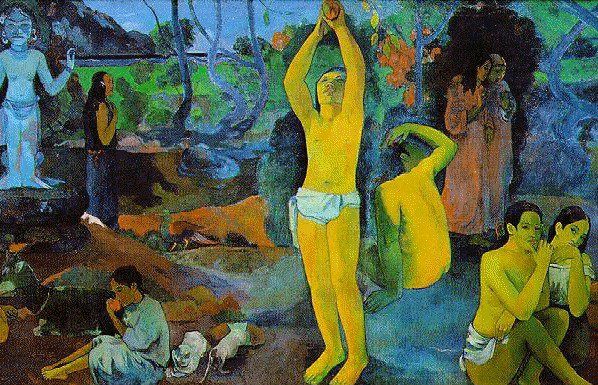 Exhibition explores this classical theme and its place in the development of modern art
(June 20–September 3, 2012)

Philadelphia, PA (April 2012)—The dream of Arcadia, a mythic place of beauty and repose where humankind lives in harmony with nature, has held an enduring appeal for artists since antiquity. With its promise of calm, simplicity, and order, it has served as both an inspiration—the sought for, but never fulfilled ideal of a paradise here on earth—and as an image of refuge, a place that is distant and seemingly protected from the vicissitudes of life.

In the late 19th and early 20th centuries, a time of sweeping and often disruptive social, technological, and intellectual change, this dream found a powerful new currency and once again spurred the imagination of a new generation of painters—many of whom played key roles in the development of modern art.

At the heart of this new exhibition organized by the Philadelphia Museum of Art are three monumental canvases, each an acknowledged masterpiece and each, in its own distinctive way, a powerful response to the Arcadian tradition: Paul Cézanne’s enigmatic The Large Bathers (1906; Philadelphia Museum of Art), the largest of this artist’s paintings in an idyllic landscape, which caused a sensation when it was first exhibited in 1907; Paul Gauguin’s Where Do We Come From? What Are We? Where Are We Going? (1897-98; Museum of Fine Arts, Boston), which situates an Arcadian theme in the distant realm of Polynesia where this artist spent his last years and created some of his finest and most powerful works; and Henri Matisse’s Bathers by a River (1909-17; The Art Institute of Chicago), the mural-sized painting that was inspired in part by Cézanne (Matisse owned and revered a small painting by Cézanne on the theme of the bathers, citing it as one of the greatest influences in his artistic life) and represents one of the greatest achievements of Matisse’s career.

Gauguin, Cézanne, Matisse: Visions of Arcadia will examine the different, yet closely related and complementary meanings of these three paintings, each a landmark in the history of modern art. Featuring more than 40 works by 23 artists drawn from public and private collections in this country and abroad, the exhibition will also explore more broadly both the enduring appeal that the Arcadian ideal had for artists in the 19th century, such as Jean-Baptiste-Camille Corot, Pierre Puvis de Chavannes, Georges Seurat, and Cézanne, and how it emerged once again in a new and powerful form in the work of a generation of modern painters—including Henri Rousseau, Pablo Picasso, André Derain, Robert Delaunay, and many others—who embraced the age-old theme of a serene and joyous life in harmony with nature and adapted to their own, often radical pictorial purposes.

“We have come to recognize that the sources of modern art and the various influences that shaped its development are remarkably diverse,” notes Timothy Rub, The George D. Widener Director and Chief Executive Officer of the Philadelphia Museum of Art. “In this regard, it is increasingly important to understand how artists of this period looked to the past—drawing upon powerful and still vital artistic traditions—and how they shaped it to their own individual visions. As Philadelphia will be the only venue for this wonderful exhibition, we hope that it will persuade many visitors from this country and abroad to visit our city this summer.”

The renewed interest in the theme of Arcadia in the early decades of the 20th century was motivated in part by the desire that all artists feel to measure themselves against the great accomplishments of the past—Cézanne once said famously that he wished to “redo Poussin after nature”—as well as by the fascination with a subject that has a universal appeal. Moving beyond the classical treatment of Arcadia that had long dominated European painting, the avant-garde interpreted it in new and very different ways.

Cézanne’s many variations on this theme, especially The Large Bathers, were perhaps the most enigmatic, as well as the most influential. Some painters, like Gauguin, Matisse, and Henri Rousseau, transplanted the Arcadian theme to tropical settings, real or imagined, replete with lush foliage and the powerful allure that such distant places had for the European imagination. Others, such as Paul Signac, Robert Delaunay, or German artists such as Ernst Ludwig Kirchner and Franz Marc, each updated this theme and brought it, in their own distinctive ways, into communion with contemporary culture: Signac in the service of his progressive politics, which imagined a new golden age of peace and prosperity for the common man; Delaunay, who married the pastoral ideal with his favored theme of the modern city, creating a great decorative mural entitled The City of Paris (1910 - 12); and the Germans—responding, by contrast, to the increasingly fragmented and hectic pace of the modern world—in pursuit of the vision of a return to a simpler life, one that would be made more balanced and complete by being brought into harmony with nature.

Many of the paintings brought together for this exhibition also serve as a reminder of how many of the most progressive artists of this period—the decades just before and after the turn of the 20th century—not only adapted the image of Arcadia for new uses, but often did so on a monumental scale. For example, the new figural paintings that Picasso, Derain, and others painted in 1907 and later not only signaled new directions in their art, they were also among the largest works they had created up to that time. And, to return to the heart of the exhibition, the three great canvases painted by Gauguin, Cézanne, and Matisse—Where Do We Come From? What Are We? Where Are We Going?, The Large Bathers, andBathers by a River—were intended not simply as summary statements of the distinctive visions of each of these three master artists, but also as proofs of the power of modern painting to speak eloquently on the scale of the epic paintings of the past.

“Gauguin, Cézanne, Matisse: Visions of Arcadia reflects the challenge of expressing a timeless and deeply human ideal with new urgency and meaning in the modern era,” said Joseph J. Rishel, The Gisela and Dennis Alter Senior Curator of European Painting before 1900, and Senior Curator of the John G. Johnson Collection and the Rodin Museum. “By bringing together these ambitious works, we hope to convey an unusual range of achievement leading up to World War I, as artists fueled by high optimism and sometimes profound unease looked inward and to each other to give creative shape to the common fate of the human condition.”

About the catalogue: The Philadelphia Museum of Art, in association with Yale University Press, will publish a 224-page catalogue with 180 color plates. It contains essays by Joseph J. Rishel, including Arcadia 1900 and Cézanne, Virgil, Poussin; Charles Dempsey, The Painter’s Arcadia; George Shackelford, Trouble in Paradise; Stephanie D’Alessandro, Re-visioning Arcadia: Henri Matisse’s Bathers by a River; and Tanja Pirsig-Marshall, “Dream the Myth Onwards”: Visions of Arcadia in German Expressionist Art. It will be available in the Museum store in hardcover ($55) beginning June 18, 2012. ISBN: 9780300179804. It also can be purchased by calling 1-800-329-4856, or online at philamuseum.org.

The exhibition will be on view during a time when numerous major art-related projects are coming to completion around Philadelphia, including the opening of the Barnes Foundation, the reopening of the Rodin Museum, both on the Benjamin Franklin Parkway, and Sol LeWitt: Lines in Four Directions in Flowers, a new garden situatedbetween the banks of the Schuylkill River and the Philadelphia Museum of Art’s Sculpture Garden and the Riley Memorial. These and other initiatives are also reflected in a broad-based marketing campaign, “With Art Philadelphia,” which is overseen by the Greater Philadelphia Tourism Marketing Corporation.

Press preview friday, June 15, 2012
Galleries open 9 a.m. to 2 p.m. with remarks at 10 a.m.
by Timothy Rub, The George D. Widener Director and Chief Executive Officer
A tour follows with Joseph Rishel, The Gisela and Dennis Alter Senior Curator of European Painting before 1900, and Senior Curator of the John G. Johnson Collection and the Rodin Museum. Coffee and continental breakfast served