'Primary Sources: 2011-12 Artists in Residence' features new work by the latest participants, while 'Illuminations: Expanding the Walls 2012' offers a glimpse at the exceptional work by teen participants in the museum's 8 month photography intensive. The galleries host two of six sections of 'Caribbean: Crossroads of the World' offering an opportunity to explore 4 centuries of the region's diverse and impactful cultural history. Finally, 'Harlem Postcards Summer 2012' presents a new installment of the beloved series. 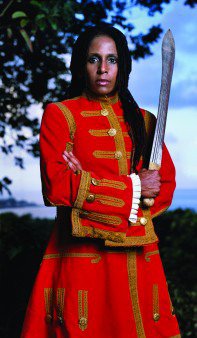 The Studio Museum in Harlem is thrilled to announce its Summer 2012 season, a compelling mix of local and global perspectives on view from June 14 to October 21. Primary Sources: 2011-12 Artists in Residence: Njideka Akunyili, Meleko Mokgosi, Xaviera Simmons features new work by the latest participants in the Studio Museum’s renowned Artist-in-Residence program, while Illuminations: Expanding the Walls 2012 offers a glimpse at the exceptional work by teen participants in the Museum’s eight month photography intensive. Visitors can also begin or continue their journey through the multi-venue exhibition Caribbean: Crossroads of the World, organized by El Museo del Barrio in conjunction with the Queens Museum of Art and The Studio Museum in Harlem. The Studio Museum’s galleries host two of six sections of Caribbean: Crossroads, offering an exciting opportunity to explore four centuries of the region’s diverse and impactful cultural history. Finally, Harlem Postcards Summer 2012 offers a new installment of the beloved series, with fresh takes on the iconic neighborhood by Yasmine Braithwaite, Zoe Crosher, Moyra Davey and Lauren Halsey.

Caribbean Crossroads of the World

The exhibition Caribbean: Crossroads of the World is the culmination of nearly a decade of collaborative research and scholarship organized by El Museo del Barrio in conjunction with the Queens Museum of Art and The Studio Museum in Harlem. Presenting work at the three museums and accompanied by an ambitious range of programs and events, Caribbean: Crossroads offers an unprecedented opportunity to explore the diverse and impactful cultural history of the Caribbean basin and its diaspora. More than 500 works of art spanning four centuries illuminate changing aesthetics and ideologies and provoke meaningful conversations about topics ranging from commerce and cultural hybridity to politics and pop culture.

Shades of History offers a broad perspective on the various ways artists have explored the significance and relevance of race to the history and visual culture of the Caribbean. The works on view examine the legacies of slavery and abolition, class- and race-based conflict, significant figures in Caribbean history and the ideals of social and cultural movements, providing a visual entry into the complex history of ideas of race at the “crossroads of the world.”

Land of the Outlaw brings together works of art that address perceptions of the Caribbean as both a utopian place of pleasure and a site of illicit or deviant activity. The notion of deviance appears in various myths and stereotypical characters—including pirates, treasure-hunters, slave traders and even zombies—that are now part of global popular culture. At the same time, a parallel view of the Caribbean as paradise was created through mass-produced illustrations and texts.

Primary Sources presents the work of Njideka Akunyili, Meleko Mokgosi and Xaviera Simmons, the 2011–12 artists in residence at The Studio Museum in Harlem. All three artists use appropriated source material and imagery, mediating and reinterpreting their initial contexts through painting and photography. A primary source is original documentation of a specific historical moment, often used to inform later interpretations or analyses of that time period. For Akunyili, Mokgosi and Simmons, such material provides the starting point for artistic practices that are deeply invested in histories—recent and distant, personal and global—to make artworks situated in the immediate present.

Expanding the Walls: Making Connections Between Photography, History and Community is an annual, eight-month program in which New York high school students explore history and community through photography. Since the program’s founding in 2001, the James VanDerZee (1886–1983) archives—housed at The Studio Museum in Harlem—have been the primary catalyst for the students’ critical reflections on the representation of culture and community. Now in its twelfth year, the program and exhibition continue to be impassioned considerations of VanDerZee’s timeless themes, and testaments to the Studio Museum’s commitment to young, emerging artists.

In Illuminations, the 2012 Expanding the Walls artists celebrate and critique contemporary culture, and explore various definitions of self at a key moment in each of their lives. The group investigates the formal and conceptual possibilities of photography, drawing on a wide range of technical effects, investigating qualities of light and color, and using theatrical lighting and staging to manipulate the scenes they depict. The works in the exhibition reflect the specific concerns and interests of each artist, including teen culture and social life, neighborhood and high school communities, the bonds of family, and the natural and urban environments that compose the landscape of New York. Many of the artists also emphasize themes of individuality and vulnerability as they transition into adulthood, making pictures that reveal honest interpretations of their everyday lives.

Represented, revered, and recognized by people around the world, Harlem is a continually expanding nexus of black culture, history and iconography. Venerable landmarks, such as the Abyssinian Baptist Church, the Apollo Theater, Hotel Theresa, Audubon Ballroom and 125th Street, remain popular emblems of important historic moments and moods. The Studio Museum ongoing series, Harlem Postcards, invites contemporary artists of diverse backgrounds to reflect on Harlem as a site for artistic contemplation and production. Installed in the Museum lobby and available to visitors free of charge, Harlem Postcards present intimate views and fresh perspectives on this famous neighborhood.

July–October 2012:
The Bearden Project offers a new iteration of an initiative in which artists were asked to create a work of art inspired by Romare Bearden’s life and legacy on the occasion of the centennial of his birth. New works by contemporary artists join those displayed during Fall/Winter 2011–12 and Spring 2012 seasons.

The Studio Museum in Harlem
144 West 125th Street New York, NY 10027
open Thursday and Friday, noon-9pm; Saturday, 10am-6pm; Sunday, noon-6pm. The Museum is closed to the public but available for school and group tours on Monday, Tuesday, and Wednesday.
Museum admission is by suggested donation: $7 for adults, $3 for students (with valid identification) and seniors.
Free for children 12 and under. Sundays are free at the Studio Museum, thanks to generous support from Target.