Initially questioning the codes and social conventions born of a popular or mythical culture, Boris Achour and Angel Vergara both construct their work around mechanisms linked either to mass or autocratic production. In the Fri-Art exhibition, the works of Boris Achour and Angel Vergara complement each other, introducing visitors to "off-limits" areas, and enabling them to revise their own critical tools with respect, wit and humor. 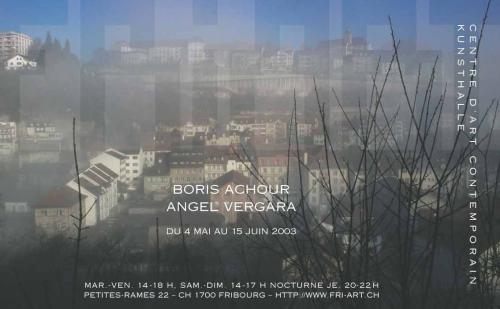 Initially questioning the codes and social conventions born of a popular or mythical culture, Boris Achour and Angel Vergara both construct their work around mechanisms linked either to mass or autocratic production. They use imaginary accounts to recreate fiction, building a universe which mixes interpretative modes based on reality or tradition, causing the viewer to doubt his common sense, to play with reality and shift the primary function of an object or means of action.

With his illuminated sign "Je ne veux tout" (2000), Boris Achour examines our identity in a society that suffers from consumerism and its habits. The "Sommes" (1999), an ambiguous title for a photograph of a subject sleeping in a vertical position, head resting on the neatly trimmed hedges around an affluent property in Los Angeles. This universe seems perfectly absurd because it features a person or figure akin to fictional anti-heroes. The same can be said of Achour's automatic glass swing door, the mechanism of which does not react to the visitors' movements, but to random computer-generated impulses. Based on anomalies or exceptions, this work is part of a unilateral system of exchange which submits the viewer to an external logic. Reestablishing the work's internal dialectic, the artist successfully orchestrates new webs of unheard of meanings. Created for Fri-Art, "non-stop paysage" (2003) is a world in itself, a playful landscape in which viewers find themselves and move away from scenarios that hold them prisoner. It is noteworthy that this work asks questions to which there is no answer, poses insoluble mysteries, and brings about casual encounters that remind us that nothing is due to accident.

Day-to-day life inspires Angel Vergara. Reality becomes the place where everything is possible, an area for exchange, transformation and circulation. In his performances, Vergara becomes Straatman, "the man in the street", who abandons his brushes and becomes a mobile work (of art). At other times he hides behind a black rubber mask with African features to denounce racial inequality. He also likes to stage unpredictable meetings that upset and disturb our daily routine.

Vergara launched the "Nanards", a currency that has been accepted by shopkeepers in the French town of Revin. This led to a downright "nanarchy" in the public space, and revolutionized the established order. In his "Gelateria del AÃ±o", the artist rolled through Aachen on a tricycle during one summer season, pulling an ice-box and selling ices named Kiss, Perfume or Conversation. Angel Vergara likes to parody consumer products and certain myths, and uses fancy dress to denounce the rigidity and coldness of certain systems with greater eloquence.

With the situation in Irak the most burning current public concern, Vergara is working on a project for Fri-Art together with the swiss army, intended to shed light on military culture. Over centuries, its great epic works, based on the praise of heroic acts - which were not necessarily purely warlike - controlled the world. "All the pure and noble arts in peacetime are based on war; all great art has been produced by warlike peoples", wrote John Ruskin, a major 19th century art critic around whom Vergara structures his investigations. To bridge the gap between these two cultures - war and peace - which now appear to be so far apart, it might be useful to find a common approach to their history, sounding out the relationship between artists, writers and military campaigns.

In the Fri-Art exhibition, the works of Boris Achour and Angel Vergara complement each other, introducing visitors to "off-limits" areas, and enabling them to revise their own critical tools with respect, wit and humor.