Minimal Myth presents a selection from the museum's collection of Minimal art and works by the Dutch Nul group from the 1960s and 1970s alongside related work by contemporary artists. Icons such as Carl Andre, Mel Bochner, Jan Schoonhoven and Ad Dekkers will be show in relation to contemporary artists. This summer the Submarine Wharf on the RDM Campus is presenting the installation 'Ballads' by Sarkis. The building's original function and the surrounding water are central to the installation. Finally on view a combined survey of Gielijn Escher's own posters. 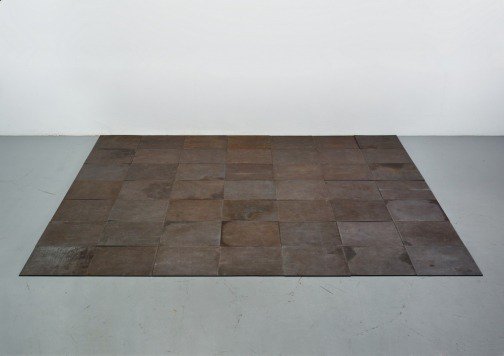 This summer the museum is exhibiting a selection from its own collection of Minimal art and works by the Dutch Nul group from the 1960s and 1970s alongside related work by contemporary artists. Icons such as Carl Andre, Mel Bochner, Jan Schoonhoven and Ad Dekkers will be exhibited in relation to contemporary artists. The exhibition has been selected by Francesco Stocchi, the museum’s senior curator of modern and contemporary art.

Major works from the collection of Museum Boijmans Van Beuningen will be shown in the museum’s main Bodon Gallery, together with works by contemporary artists. The Bodon Gallery opened in 1972 with the express purpose of providing space for large installations by artists living and working at that time. The exhibition attempts to explore the legacy of Minimal art by confronting works by contemporary artists with that of their forebears. The exhibition features sculptures, paintings, prints, drawings and photography.

Changing significance
‘Minimal Myth’ juxtaposes the work of two generations, but avoids a historical perspective. The artists start with common interests, but differ in their intentions. The selected works highlight contradictions: a theoretical versus emotional approach, regularity versus irregularity, objectivity versus subjectivity, attention to detail versus an overall vision. There is also an emphasis on the way in which geometric abstraction has changed from one generation to the next.

The same, yet different
Artists in the 1960s and 1970s, for example, would use machinery in the production process to keep their work as objective as possible, whereas contemporary artists are not at all bothered about revealing their own personality in their art. At first glance Minimalist icons such as Carl Andre, Mel Bochner and Jan Schoonhoven seem to share the same interests as the contemporary artists, but the exhibition shows that the two generations have different approaches.

First foreign curator
Italian Francesco Stocchi joined Museum Boijmans Van Beuningen’s team of curators on 1 January; he is responsible for modern and contemporary art. Stocchi has been active for several years as a curator, writer and publisher.

The Submarine Wharf in Rotterdam’s docklands is currently undergoing a true transformation. The construction of the various monumental sculptures that make up Sarkis’ installation ‘Ballads’, commissioned by Museum Boijmans Van Beuningen and the Port of Rotterdam, is well under way. They include an 18-metre bell tower and a 16-meter lampshade in which a spotlight rises and falls to the rhythm of the artist’s breathing.

This summer the Submarine Wharf on the RDM Campus is presenting the installation ‘Ballads’ by Sarkis (1938). The building’s original function - submarines were once built here - and the surrounding water are central to the installation. Sarkis unites the building’s past and present, creating an extraordinary experience for the visitor with monumental objects, music and coloured films that filter the daylight like a modern variant of stained-glass windows. Sarkis is the third artist that Museum Boijmans Van Beuningen and the Port of Rotterdam have invited to make an installation in the Submarine Wharf. The festive opening of ‘Ballads’ will take place on Saturday 2 June 2012.

“In ‘Ballads’ Sarkis attempts to create a connection between the dark depths of the water and the majestic expanse of thin air”, writes guest curator Nicolette Gast in the booklet that accompanies the exhibition. The carillon continuously plays the composition ‘Litany for the Whale’ by John Cage and takes the visitor on a journey into the realm where submarines and whales meet. The pendant to the monumental bell tower is the slender 16-meter-high lampshade covered with white down feathers. The Futuro, a futuristic holiday home, has come to land in the Submarine Wharf, forming an auditorium for Sarkis’ videos about water: experiments in form and colour.

Sarkis Zabunyan was born on 26 September 1938 in Istanbul, into a middle-class Armenian Apostolic family. He attended a French Christian secondary school and then studied interior design at the Mimar Sinan University of Fine Arts. Following a period of military service, he worked as an architectural draughtsman. In his spare time he made gouaches, which he exhibited from 1960.
In 1964 he and his wife, a philosophy student, immigrated to Paris, where he began using only his first name. Life in Paris was a revelation for him. In Turkey he had seen Western art only in the form of reproductions; museums exhibited only work by Turkish artists. But at that time Paris was the centre of the European art world and it also introduced him to European and American cinema.

Gielijn Escher has been designing and collecting posters for fifty years. Museum Boijmans Van Beuningen is showing a combined survey of Escher’s own posters and a selection from his collection. The exhibition coincides with the publication of a book: ‘Gielijn Escher Living for Posters’.

This summer Museum Boijmans Van Beuningen is exhibiting a selection of approximately sixty posters by Gielijn Escher (1945). The display is complemented by sixty posters from Escher’s collection of German posters by artists including Lucian Bernhard, Hans Rudi Erdt and Ludwig Hohlwein. To coincide with the exhibition, Uitgeverij De Buitenkant is publishing a book on Escher’s work with an essay by Mienke Simon Thomas, curator of applied arts and design at Museum Boijmans Van Beuningen.