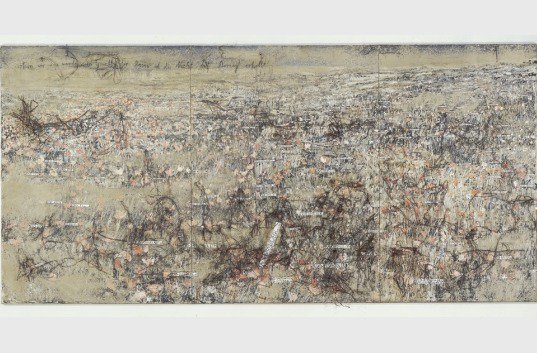 The collection. German art from Kiefer to Henning
23 June - 30 September 2012

This summer, Museum Boijmans Van Beuningen will be exhibiting the enormous painting ‘Wohin wir uns wenden im Gewitter der Rosen, ist die Nacht mit Dornen erhellt’ (1998) by Anselm Kiefer. This piece is almost 4 metres high and 8 metres long and is being shown as part of the exhibition ‘The collection. German art from Kiefer to Henning’ which offers a cross section of German painting from the museum’s own collection, supplemented with several important works that are on long-term loan to the museum.

‘Wohin wir uns wenden im Gewitter der Rosen, ist die Nacht mit Dornen erhellt’ (1998) by Anselm Kiefer is from the De Heus-Zomer collection and has been donated to the museum as a long-term loan. Other pieces in the exhibition by a younger generation, namely by Anton Henning, Neo Rauch, Eberhard Havekost and Thomas Scheibitz have also been presented to the museum by private collectors as long-term loans. ‘The collection. German art from Kiefer to Henning’ not only gives an impression of the strong painting tradition in Germany, but also shows how the museum’s own collection can be enriched with pieces from private collections. Museum Boijmans van Beuningen will be exhibiting some twenty-five paintings plus a number of sculptures.

German painting in the museum collection
Museum Boijmans Van Beuningen can boast an interesting selection of German art, mainly paintings. Important acquisitions in this area were made during the period that Wim Beeren was director. From his appointment in 1978, he concentrated largely on work by American artists, but also carefully followed European trends. For example, he invited the German artist Joseph Beuys to take part in a public debate in the museum and subsequently purchased his enormous installation entitled ‘Grund’.
Beeren appointed designer and collector Martin Visser as head curator for modern and contemporary art. Visser carefully followed the developments in the area of new expressive painting in Germany (and farther afield) and between 1978 and 1983 acquired many important paintings. Some of these are on show in this exhibition, including works by A.R. Penck, Sigmar Polke, Markus Lüpertz, Jörg Immendorff and Georg Baselitz. Works by the second generation of the so-called ‘Neue Wilde’ are also well represented in the collection including pieces by Walter Dahn, Jiri Dokoupil and Milan Kunc. These artists produce expressive paintings, often making use of classic German themes and symbols. This renewed interest in painting allowed the re-emergence of great stories and saw the return of the artist’s personal signature.
Towards the end of the ‘eighties there was rather a lot of interest in German artists. In 1989, a solo exhibition of works by Isa Genzken and Gerhard Richter was staged by the museum. Later, various works were purchased for the collection, not only by Genzken and Richter, but also by Günther Förg. A selection is included in this exhibition.

A new generation of German painters
In recent years, Museum Boijmans Van Beuningen has paid slightly less attention to German painting. For example, there are no works from the Neue Leipziger Schule in the collection, except for a solitary painting by Sebastian Gögel. In this exhibition, this work, together with a recent acquisition of a work by Peter Feiler, will be on show together with long-term loans from private collections. This new generation of German artists approaches painting with a new zeal and occupies a willfully unique position, making full use of the possibilities offered by painting, both in technique and subject, whether abstract or figurative.

This spring there was an exhibition of surreal drawings from the collection of Museum Boijmans Van Beuningen in Paris. Now the exhibition, curated by the museum’s director Sjarel Ex, is being shown in a slightly revised form in Rotterdam.

The Institut Néerlandais in Paris recently exhibited a selection of more than seventy contemporary drawings by seventeen artists from the collection of Museum Boijmans Van Beuningen. From 23 June some of these works will be shown in a new display in Rotterdam, augmented by drawings that were too fragile to travel to Paris. The exhibition ‘Extravagant, Shameless, Unlimited’ includes surreal contemporary drawings by Oscar Camilo de las Flores (Mexico), Paul Noble (UK), Charlie Roberts (USA), ManfreDu Schu (Austria), Peter Feiler (Germany), Robert McNally (USA), Ewoud van Rijn (The Netherlands) and Kinke Kooi (The Netherlands), Mai van Oers (The Netherlands) and others.

Contemporary drawings in Boijmans
The museum has a collection of more than 70,000 works on paper. It is one of the richest collections of prints and drawings in Europe, with major groups of works by Italian, German, Dutch and French masters. In recent years the museum has assembled an international collection of work by ‘purebred draughtsmen’ such as Ewoud van Rijn and Paul Noble. These include representative groups of works by particular artists and some extremely large drawings. The museum’s collection contains drawings that stem from a highly individual fantasy world. In certain cases the works can be seen as a form of automatic drawing. The surreal quality of the works is central to the collecting policy, which the museum sees as continuing the tradition of artists such as Dalí, Magritte, Delvaux, Tanguy and Zürn.

This summer Museum Boijmans Van Beuningen is launching Design Columns, a series of exhibitions that investigates how design and innovation respond to current social questions.

A series of Design Columns
The series will deal with a new topical theme every three months. In each five to ten designers will present products, prototypes and films that will encourage the public to think about topical issues from a new perspective. In this way the museum the museum functions as a space where new ideas are made visible. The starting point of each presentation is the notion that designers can change the world. The objects displayed in the Design Columns demonstrate how knowledge and experimentation can influence the world. Designers regard everyday reality as a source of inspiration for their imagination. These presentations show the importance of creativity for society. Design is the bridge between society and creativity.

Microscopic worms and bee police
All the works in ‘Micro Impact’ are related to microscopic dorms of life. Mattijs Munnik, who was nominated for the Rotterdam Design Prize in 2011, presents his ‘Microscopic Opera’, a sonic translation of the specific twisting movements of five different mutations of the microscopic worm Caenorhabditis elegans. In the film ‘Policing Genes’, Thomas Twaites proposes a fictional method of detecting illegally manipulated plants. Bees take the pollen as evidence to their hive, and indicate the location of the plants through their dance upon their return. Beekeepers could become a new branch of the police.