The artist has developed two rooms with very different spatial concepts. The first, austere and virtually empty, has sloping walls that seem to recede and offers few points of reference. The other is characterized by profusion, an abundance that seems almost to close in on itself. 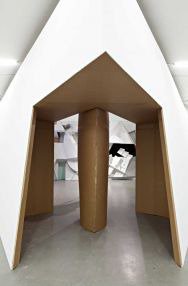 Florian Baudrexel (* 1968 in Munich, lives in Berlin) has developed two rooms with very different spatial concepts for his solo exhibition at the Kunstverein Hamburg. The first, austere and virtually empty, has sloping walls that seem to recede and offers few points of reference, either in terms of discernible visible phenomena or in terms of clues that might serve as a guide in physically experiencing the space. The other is characterized by profusion, an abundance that seems almost to close in on itself, blurring the line between the space and the boundaries delimiting it. To get from one room to another, visitors pass through a space inspired by a human face, streaming in and out of its "mouth" like breaths of air. The dialectic that arises – between inner room and outer room, emptiness and fullness, coolness and apparent warmth – is based on emphasizing form. With its ostensibly unremarkable forms, the outer room appears to embody reserve and restraint, while the sculptural structure of the inner room seems to thrust itself to the fore. However, visitors should not be fooled by this moment of contrast, for of course both spaces were deliberately designed to bring out their opposite. One is struck immediately by the formal rigor, the abstraction, the composition of the room installation. And yet the playfulness with which Baudrexel developed his sculpture shines through despite – or perhaps even because of – these aspects. Actually, the entire exhibition can be regarded as one big sculpture. Baudrexel works from models and his small-scale sculptures often resemble them. And of course, models are frequently used in architecture and in interior design, disciplines that are not content to restrict their focus to a painting on the wall or an individual object, but take a broader view and think in terms of the big picture.

Models serve Baudrexel as a point of reference, a stylistic device from which he eventually develops his work of art. This is where the element of play comes in. Few things are planned down to the last detail; the fundamental decisions are made during the production process – and could just as easily have turned out differently. The process is the important thing.

So what happens to these rooms and to those visiting them when they move in and out of them, as they follow the flow and are steered, possibly finding themselves up against a corner and thus redirected? Every element of the sculpture has its purpose, has been deliberately shaped and designed with innumerable considerations in mind, many of them well-intentioned, some even to serve a specific pedagogical purpose. Yet very little has been entirely thought out down to the last detail – and thus, very little has been fully designed. True, a lot of consideration went into creating the work, but this attentiveness has more to do with responding than with ruling out random aspects or contingencies. The sculpture would seem to offer a clear advantage here, as it imposes few requirements, apart from perhaps dimensions of 200 square meters, an absence of windows and a ceiling height of 4.3 meters. And all these can be changed, of course – during the design process.

The exhibition is funded by Hamburgische Kulturstiftung.

The exhibition is part of Hamburger Architektur Sommer 2012.

On the first floor of its premises in Hamburg, Kunstverein Hamburg is presenting the first institutional solo exhibition of works by Cologne-based artist Alexandra Bircken, who was born in 1967. The show will primarily feature recent works produced between 2010 and 2012.

For the Kunstverein in Hamburg, Gert & Uwe Tobias (*1973 in Brasvo, Romania, living in Cologne) have developed an installation that makes the entire location something of a window into the fantastical contents of their minds. From January to April 2012 their work will stretch from the foyer to the stairwell and into both exhibition areas, filling a space of some 1,300 qm. After that, parts of the installation will gradually retreat to make room for other exhibitions. By the end of the year their work will remain only in the foyer and the stairwell.