Cash for Gold. Persistently tracking the status of images Beier develops a transmutable lexicon of her own. Suggesting an acuity of authorless domains, anything from the commercial, traditional and natural fields of production enters her vocabulary. 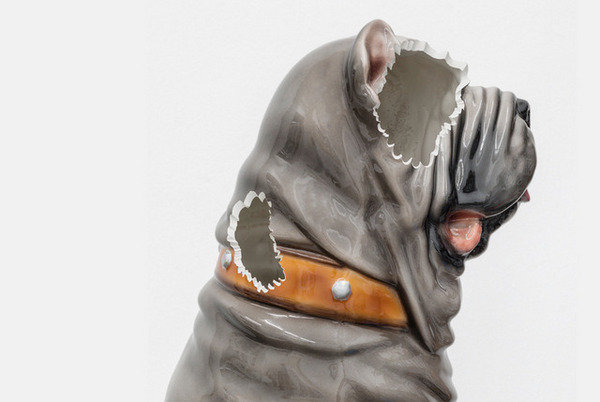 Nina Beier’s first institutional solo exhibition in Germany, Cash for Gold, at Kunstverein in Hamburg, consolidates the artist’s negotiation of the space between representation and value. Persistently tracking the status of images in our contemporary reality, Beier develops a transmutable lexicon of her own. Suggesting an acuity of authorless domains, anything from the commercial, traditional and natural fields of production enters her vocabulary. She extracts material such as nicotine chewing gum, Hermès ties, human hair wigs and artificial sweat from their circumscribed settings and exposes their layers of historical, cultural and social information. In times of mass produced and homeless images the body becomes the carrier of impossible promises. Beier's work pinpoints moments of confusion between the image and what it depicts to show complex affiliations in which meaning is never stable.

Exhibition Glossary
Palm Tree: In many historical cultures, palms were symbols for such ideas as victory, peace and fertility. Today, palms remain a popular symbol for the tropics and vacations.(1) Dog: The dog is an apt animal, which shows a lot of loyalty, obedience and blind love towards humans.(2) Handmade Persian Rug: Oil provides the largest export income, but when it comes to occupation carpet manufacturing dominates. Millions of Iranians are involved in some way with manufacturing of carpets.(3) Human Hair Wig: There are generally four basic types of human hair used in wigs: Chinese, Indonesian, Indian and European/Caucasian. The majority of wigs are made from Asian hair.(4) Nicotine Gum: "Quitting smoking is easy," Mark Twain once said. "I've done it a thousand times." Hermes: Because of his speed, Hermes received the role of the messenger and conductor of souls to the Underworld. Hermes was the only Olympian god who was authorized to visit Heaven, Earth and also the Underworld and thus enjoyed popularity among all the Greek gods and spirits.(5) Artificial Tears: Most artificial teardrops strive for the same goals: consistency, comfort and an interaction with the ocular surface intended to ease discomfort and promote protection of the ocular surface.(6) Bronze: Bronze was used to make weapons, tools and armor, but it was also used extensively in the creation of art; and indeed, even functional bronze items were often treated to artistically rendered decoration.(7) Stock Photography: These authorless and homeless images found in image banks spring from freelance photographers trying to figure out what might need to be communicated today. Empty and open metaphors are created and the less these images mean, or to put it differently, the more they can mean, the more successful they are.(8) Sweat: Although sweating is found in a wide variety of mammals, relatively few, such as humans and horses, produce large amounts of sweat in order to cool down.(9)
(Bettina Steinbrügge)

A catalog will be published by Kunstverein in Hamburg, Kunsthaus Glarus and Mousse Publishing in fall 2015. The exhibition is supported by the Ministry of Culture of the Free and Hanseatic City of Hamburg, the Danish Arts Council, Vitra GmbH and Zavak GmbH.