All in Golden Ratio. The show is the result of a collaboration between Asli Serbest and Mona Mahall. In their work they are trying to deconstruct the borders of architectural practice by applying intermedial approaches. 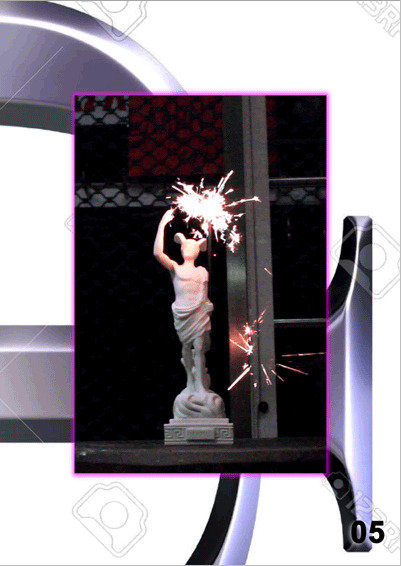 The exhibition Spuren spuren is the result of a collaboration between Asli Serbest and Mona Mahall. The two architects are working together under the nom de guerre m-a-u-s-e-r. In their work they are trying to deconstruct the borders of architectural practice by applying intermedial approaches. Besides mending seemingly contrary disciplines, collaboration is a key element to their work.

Adelheid Schulz, a theatre director, involved in the project exemplifies this.
Asli Serbest and Mona Mahall teach at the Stuttgart State Academy of Art in the department foundations of design and experimental architecture. They are furthermore involved in the Institute of Foundations of Modern Architecture and Design, at the University Stuttgart. Students of both institutions participate in the project Spuren spuren. Workshops have been taking place in both Stuttgart and Athens.

Spuren spuren applies the concept of collecting and producing traces at the same time. In an in-between state of collection and production, events and interventions are both recorded as well as triggered. Two snakes, the crisis, a beach hut, the desert, and Hölderlin traverse these events and thus challenge strict oppositions between subject and object, between origin and derivative.

The question is raised, whether traces can be linked to any localities at all. Can this only happen at the place of origin or is it possible to do so by a reference or model within an exhibition? In addition it is being emphasized that localizations are difficult to maintain in the age of the Internet, which enables complete medial connectedness and diffusion.

Spuren spuren is not conceptualized as static misé-en-scene. Besides a presentation within the exhibition-space the latter becomes a subject of production in itself. The Querungen are transformed into the locality of an ongoing process. During the exhibition a travel agency is installed, Greek language courses are offered. A course on the golden ratio is taking. The exhibition becomes an open space. Package holidays and Ouzo refer to Germany's post-war period clichés concerning Greece. The golden ratio makes reference to the concepts of ideal beauty, which originate in Greek Antiquity.
The inclusive situation is part confrontation with well-known clichés while at the same time opportunity to get involved in conversations about the present.

With the help of Chrissi Nasz