'The Residue of Memory' is a group show that examines the diverse ways that events can leave their mark, and how objects and experiences can function as physical traces or intangible points of contact to the past. Simon Denny's diverse artistic practice reflects on the production, distribution, and consumption of media. 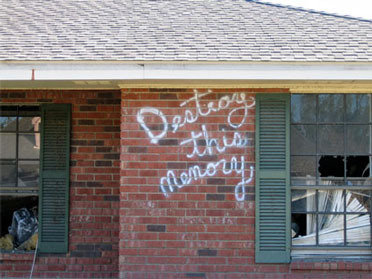 The Residue of Memory

Memory is a paradoxical thing, central to the formation of the self, yet fugitive and difficult to pin down. Memories become attenuated with the passage of time, yet can come rushing back in an instant under certain conditions. From the simple act of marking time to the recording of complex events, The Residue of Memory examines the diverse ways that events can leave their mark, and how objects and experiences can function as physical traces or intangible points of contact to the past.

For his work free fotolab (2009), for example, British artist Phil Collins posted ads in several European cities, offering individuals free processing and prints from their undeveloped rolls of film in exchange for all rights to the images. The resulting nine-minute slideshow—a selection of vacation photos, family gatherings, and other private moments—presents a strangely affecting montage of anonymous appropriated memories. By contrast, American artist and activist Andrea Bowers explores both the history of activist causes—including environmentalism, immigration advocacy, women's rights, and civil rights—and their contemporary manifestations. She meticulously redraws images from historical photographs, often editing out the original background and isolating figures from a crowd. By isolating these subjects Bowers moves away from the particulars of the original events and imbues them with a more universal meaning. Whether personal or public, illustrative or evocative, ephemeral or concrete, the works that make up The Residue of Memory collectively engage with and complicate such apparent dichotomies as distance and proximity, loss and remembrance, the individual and the universal.

The Residue of Memory is organized by the AAM and funded in part by the AAM National Council with major underwriting from Susan and Larry Marx. Additional exhibition support is provided by Gabriela and Ramiro Garza, Nancy and Richard Rogers, and the Bruce T. Halle Family Foundation for Latin American Art. Exhibition lectures are presented as part of the Questrom Lecture Series and educational outreach programming is made possible by the Questrom Education Fund.

Employing a hybrid approach located somewhere between research project, retail display, and promotional campaign, Simon Denny's diverse artistic practice reflects on the production, distribution, and consumption of media in an age of accelerated technological obsolescence and relentless cultural overproduction. Through a variety of media, including photographs, sculpture, video, and printed ephemera, Denny invites us to consider the evolution of television and video as both technologies and cultural forms.

Denny's recent works have included investigations into the form and "architecture" of the TV set itself (the physical depth of which, we are reminded, has shrunk along with the medium's loss of dominance as a content provider), the genre conventions of documentary, and the myriad processes by which content is translated from one medium to another. Other works explore the aesthetics of the glitch, moments of interference where the smooth flow of content breaks down, while still others mine the seemingly banal world of trade shows and industry publications.

Denny’s exhibition at the AAM grows, in part, out of his research into the history of Aspen’s own GrassRoots Television, the oldest public-access cable channel in the country. One video features GrassRoots footage of Aspen luminary Nick DeWolf speaking about the electronic community bulletin board system that he designed and implemented at the station in 1980–81, an early example of the networked communications that we take for granted in today’s world of Twitter and Facebook. Other works in the exhibition chart the process of selecting and digitally preserving “Women’s Week” (1972), an early reel-to-reel videotape from the GrassRoots archive that has been unviewable for decades.

Simon Denny: Full Participation is organized by the AAM and funded in part by the AAM National Council. Exhibition lectures are presented as part of the Questrom Lecture Series and educational outreach programming is made possible by the Questrom Education Fund.

Thursday, May 31, 6 pm
Join us for I Don’t Get It, a light-hearted and no-questions-barred conversation about the Simon Denny exhibition with community members and AAM Curator Jacob Proctor.