A retrospective. This comprehensive mid-career survey features over 70 color photographs and five video installations by the Dutch artist. The retrospective draws from each of Dijkstra's series of work. The presentation at the Guggenheim will be installed in a loosely chronological order in all four of the museum's Annex galleries, on multiple levels of the building. Dijkstra's video work will be fully integrated into the presentation. 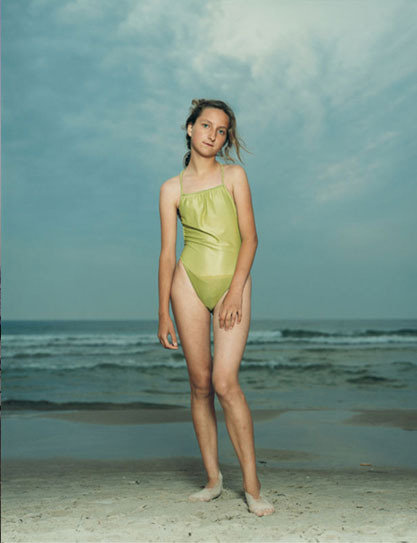 From June 29 to October 8, 2012, the Guggenheim Museum will present Rineke Dijkstra: A Retrospective, an extensive midcareer survey and the first major exhibition of the artist’s work organized by a North American institution. It is the most comprehensive museum exhibition of the artist’s oeuvre to date. Dijkstra, born in Sittard, the Netherlands in 1959, has developed an international reputation as one of the most highly regarded photographers of her generation. The exhibition will include representative examples from the most significant bodies of work she has created over the past twenty years. The retrospective is co-organized with the San Francisco Museum of Modern Art, where it opened to the public in February 2012, and will feature more than 70 color photographs and five video installations. The exhibition is curated by Jennifer Blessing, Senior Curator, Photography, Solomon R. Guggenheim Museum, and Sandra S. Phillips, Senior Curator, Photography, San Francisco Museum of Modern Art, and is accompanied by a fully illustrated catalogue. Rineke Dijkstra: A Retrospective is organized by the Solomon R. Guggenheim Museum, New York, and the San Francisco Museum of Modern Art. This exhibition is supported by the Mondriaan Fund, Amsterdam. The New York presentation of the exhibition is supported in part by the William Talbott Hillman Foundation, The Robert Mapplethorpe Foundation, the Netherlands Cultural Services, and the Leadership Committee for the Guggenheim Museum's 2012 Photography Exhibitions: Marian Goodman Gallery, Henry Buhl, and Eugene Sadovoy, as well as by Ann and Steven Ames, Lori and Alexandre Chemla, Cari and Michael J. Sacks, John L. Thomson, and those who wish to remain anonymous.

Since the early 1990s, Rineke Dijkstra has produced a complex body of photographic and video work that offers a contemporary take on the genre of portraiture. Her large-scale color photographs of young, typically adolescent subjects recall 17th-century Dutch painting in their scale and visual acuity. The minimal contextual details present in her photographs and videos encourage us to focus on the exchange between photographer and subject and the relationship between viewer and viewed. Dijkstra works in series, creating groups of photographs and videos around a specific typology or theme. In 1992, she started making portraits of adolescents posed on beaches from Hilton Head, South Carolina, to Poland and Ukraine. Shot from a low perspective, the subjects of the Beach Portraits (1992– 2002), poised on the brink of adulthood, take on a monumental presence. In contemporaneous works, including portraits of new mothers after giving birth and photographs of bullfighters immediately after leaving the ring, Dijkstra sought subjects whose physical exhaustion diminished the likelihood of an artificial pose. Dijkstra has also photographed individuals repeatedly over the course of several months or years. Her ongoing Almerisa series began in 1994 with a single photograph of a young Bosnian girl at a Dutch refugee center for asylum seekers and has grown as Dijkstra continued to photograph her regularly for more than a decade as she became a young woman with a child of her own. The outward signs of her transition into adulthood and her integration into mainstream Dutch culture reveal themselves incrementally over the course of many years. Similarly, the Olivier series (2000–03) follows a young man from his enlistment with the French Foreign Legion through the years of his service, showing his both physical and psychological development into a soldier. Later, Dijkstra took portraits of new initiates to the Israeli army, photographing female soldiers in their uniforms after induction and then again in their civilian dress, as well as male soldiers directly after military exercises. For several years beginning in 1998, Dijkstra photographed young people, often in groups, posed in the lush landscapes of public parks. In contrast to the neutral backgrounds against which many of her subjects are pictured, the richness of the park settings lends these works a greater depth of field and adds a narrative element.

More recently, Dijkstra has built upon her revelatory work in video from the mid-1990s. In The Buzz Club, Liverpool, UK/Mystery World, Zaandam, NL (1996–97) and The Krazyhouse (Megan, Simon, Nicky, Philip, Dee), Liverpool, UK (2009), Dijkstra filmed teenage habituées of local clubs dancing to their favorite music. Presented as multichannel video installations, these works showcase their subjects’ teen personas and methods of self-expression, revealed in how they style themselves and in the movements of their bodies. Two video works made in 2009 at Tate Liverpool expand the artist’s interest in the empathic exchange between photographer and subject to include the affective response to artworks. In I See a Woman Crying (Weeping Woman) (2009), a group of schoolchildren engage with art, discussing their perceptions of and reactions to a work by Pablo Picasso, while Ruth Drawing Picasso (2009) shows a girl pensively sketching a masterwork.

The retrospective draws from each of Dijkstra’s series of work. The presentation at the Guggenheim will be installed in a loosely chronological order in all four of the museum’s Annex galleries, on multiple levels of the building. Dijkstra’s video work will be fully integrated into the presentation. About Rineke Dijkstra Dijkstra was born in Sittard, the Netherlands, in 1959. She studied photography at the Gerrit Rietveld Academie in Amsterdam from 1981 to 1986. Since her first solo exhibitions, at de Moor in Amsterdam in the early 1980s, Dijkstra has shown at the Sprengel Museum Hannover (1998); the Herzliya Museum of Art, Israel and MACBA, Barcelona (1999); the Art Institute of Chicago and ICA Boston (2001); and the Stedelijk Museum, Amsterdam (2005), in an exhibition that traveled to several venues, including the Jeu de Paume, Paris; Fotomuseum Winterthur, Switzerland; Fundació la Caixa, Barcelona; and the Galerie Rudolfinum, Prague. Dijkstra has also exhibited widely in group shows, including the Venice Biennale (1997 and 2001), the Bienal de São Paulo (1998), and the Triennial of Photography and Video at the International Center of Photography, New York (2003), among many others. She has received wide recognition and numerous awards for her work, including the Kodak Award Nederland, the Art Encouragement Award Amstelveen, the Werner Mantz Award, and the Citibank Private Bank Photography Prize.

Rineke Dijkstra: A Retrospective will be accompanied by a fully illustrated catalogue featuring essays by the exhibition’s cocurators, Jennifer Blessing and Sandra S. Phillips, as well as an interview with the artist, texts about various bodies of work, and interviews with several of Dijkstra’s portrait subjects, along with her most comprehensive exhibition history and bibliography to date. Designed by the Dutch firm Mevis & van Deursen, this 260-page catalogue will feature 137 color plates and 47 text illustrations in both color and black and white and will be available in hardcover and softcover editions for $55 and $35, respectively. It is published by the Guggenheim Museum and distributed to the trade in the United States by D.A.P. Catalogues are available at the Guggenheim Store and online at guggenheimstore.org.

A range of public programs will be presented in conjunction with Rineke Dijkstra: A Retrospective. details may be found on guggenheim.org/publicprograms. Highlights include: Guided Tours

On the occasion of her retrospective, Rineke Dijkstra joins Paul Graham, the winner of the 2012 Hasselblad Award, to speak about shared artistic concerns and distinct critical practices in image making. Moderated by Jennifer Blessing, Senior Curator, Photography. Reception follows. $10, $7 members, free for students with RSVP. For tickets, visit guggenheim.org/publicprograms or call the Box Office at 212 423 3587.

Teen Night at the Guggenheim

In conjunction with the exhibition Rineke Dijkstra: A Retrospective, teens mingle in the Guggenheim galleries and meet artist Rineke Dijkstra and exhibition curator Jennifer Blessing. While talking with teen educators, participants can see the art on view and enjoy music and refreshments. Cosponsored by the Museum Teen Summit, NYC. Free, registration and RSVP required at guggenheim.org/teennight. Current high-school ID badge must be presented at check-in.

Empathy, Affect, and the Photographic Image

Public & Artist Interactions is a program that invites contemporary artists to be collaborative partners in the creation of unique learning experiences. This weeklong intensive course explores 1950s globalism, the emergence of image culture in the postwar years, contemporary portraiture, and the nature of subjectivity. Taught by internationally acclaimed artist and educator Karen Finley, daily sessions include gallery talks, studio exercises, and a final reflection. $300, $200 members, $150 students (over 18). No experience required. Additional studio time and July 17 artist conversation with Rineke Dijkstra and Paul Graham included and strongly recommended. To register, visit guggenheim.org/courses.

Tours include: Revealing Portraits - Sun, July 1 When creating a portrait an artist can share a lot about the person they are portraying. Participants will become acquainted with the portraits in the Guggenheim’s galleries.

Shake It Up! - Sun, July 8 Families will discover different ways that artists capture movement in their work.

Rineke Dijkstra: A Retrospective for Families - Sun, July 29 A family tour will focus on works in the retrospective.

Guests will enjoy the summer exhibitions with a playlist of songs selected by Rineke Dijkstra. Free for members, $18 guests and general public (credit card only at the door). Cash bar. For details, visit guggenheim.org/artafterdark.