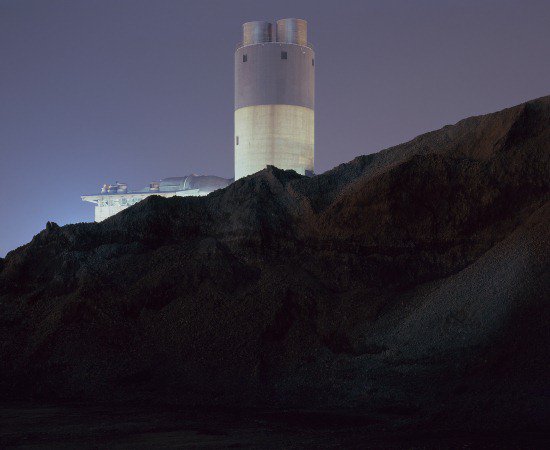 This summer marks a triumphant moment for London. As millions of people descend on the capital, flooding the streets and the new super-structure sports venues, the city will be the ultimate tourist attraction. Yet, in the midst of all this activity, VEGAS is looking to an alternative side of the city. Focussing on London’s most deserted and desolate spaces, DARK CITY offers a stark contrast to the glossy marketing of Olympic fervour with a documentary-style photographic presentation capturing London’s less watched moments.
Eckersley has, with Becher-esque discipline, spent four years photographing car parks, industrial plants, underpasses and council estates, working only in the pitch black of night, armed with his [5x4 tungsten- balanced Fujifilm]. The exhibition, and the accompanying publication, is the product of this work.

Eckersley’s acute awareness of the contrasts between the street halogen lights and the looming darkness have led him to be described as a “master of light”, and in his continued investigation of the built environment and de-peopled cityscapes he has developed a recognisable style similar to the Düsseldorf school with its vivid colours and stringent German precision.

But if the aesthetic is German, then the scene is most certainly London. Locals may recognize a scene inside the underground, a shot beside the canal, or a view on a bridge. Indeed the body of work can be seen as a typology of London space at night, though in Eckersley’s London he captures moments so quiet, so perfectly static, that they could be likened to film sets. Stranded shopping trollies appear choreographed, and stacked tyres are so poised as to be deliberately placed. Even the most throwaway arrangement suddenly becomes loaded with intent. In fact it is hard to imagine a London like this, so different to the bustling reality of everyday life. But in capturing these moments Eckersley has created a new reality – a reality that, whilst eerie, may yet become more attractive in the raucous hubbub of the Olympic Games.