Ghosts in the Machine

The major survey exhibition exploring the relationship between art and machines will present 50 years of work by artists, writers, and other visionaries past and present. The show has been conceived as an encyclopedic cabinet of wonders, bringing together an array of artworks and non-art objects to create an unsystematic archive of man's attempt to reconcile the organic and the mechanical. 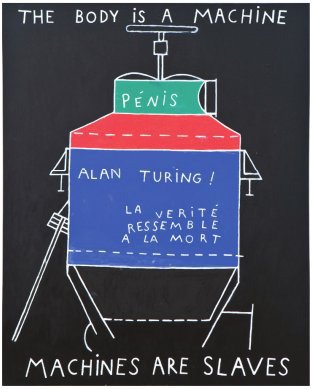 .Opening at the New Museum on July 18, 2012, “Ghosts in the Machine” surveys the constantly shifting relationship between humans, machines, and art. Occupying the Museum’s three main galleries, the exhibition examines artists’ embrace of and fascination with technology, as well as their prescient awareness of the ways in which technology can transform subjective experience. International in scope, “Ghosts in the Machine” spans more than fifty years and incorporates works by a range of historical figures and contemporary artists from fifteen countries. Together, the works on view will trace the complex journey from the mechanical to the optical to the virtual, looking at the ways in which humans have projected anthropomorphic behaviors onto machines and how those machines have become progressively more human. Eschewing a traditional chronological approach, “Ghosts in the Machine” has been conceived as an encyclopedic cabinet of wonders, bringing together an array of artworks and non-art objects to create an unsystematic archive of man’s attempt to reconcile the organic and the mechanical.

“Ghosts in the Machine” will be on view from July 18 to September 30, 2012. The exhibition is curated by Massimiliano Gioni, Associate Director and Director of Exhibitions, and Gary Carrion-Murayari, Curator.

This exhibition is the most recent of the New Museum’s ambitious thematic surveys examining tendencies in international artistic inquiry and production. With such exhibitions as “Ostalgia” (2011), “Free” (2010), “After Nature” (2008), and “Unmonumental” (2007), as well as its Triennial, “The Generational,” the Museum seeks to provide the public with fresh perspectives on the relationships between art and culture at large.

The installation at the New Museum will include over seventy artists, writers, and visionaries whose work has explored the fears and aspirations generated by the technology of their time. From Jakob Mohr’s influencing machines to Emery Blagdon’s healing constructions, “Ghosts in the Machine” brings together improvised technologies charged with magical powers. Historical works by Hans Haacke, Robert Breer, Otto Piene, and Gianni Colombo, among others, will be displayed alongside reconstructions of lost works and realizations of dystopian mechanical devices invented by figures like Franz Kafka and Raymond Roussel. “Ghosts in the Machine” also takes its cue from a number of exhibitions designed by artists that incorporated modern technology to reimagine the role of art in contemporary societies, including Richard Hamilton’s influential “Man, Machine and Motion” (1955), which has never before been on view in New York. Exploring the integration of art and science, “Ghosts in the Machine” also tries to identify an art historical lineage of works preoccupied with the way we imagine and experience the future, delineating an archeology of visionary dreams that have never become a reality.

Many of the artists in the show take a scientific approach to investigating the realm of the invisible, dismantling the mechanics of vision in order to conceive new possibilities for seeing. Central to the exhibition is a re-examination of Op art and perceptual abstraction, with a particular focus on the work of painters Bridget Riley, Victor Vasarely, Richard Anuskiewicz, Julian Stanczak, among others. Op art was unique in the way it internalized technology and captured both the ecstatic and threatening qualities it posed to the human body. Furthermore, the exhibition will include a number of kinetic and “programmed” artworks as well as expanded cinema pieces, which amplify the radical effects of technology on vision. A section of the exhibition will present a selection of experimental films and videos realized with early computer technology. One highlight of the installation will be a reconstruction of Stan VanDerBeek’s Movie-Drome (1963–66), an immersive cinematic environment where the viewer is bathed in a constant stream of moving images, anticipating the fusion of information and the body, typical of the digital era.

The works in “Ghosts in the Machine” are assembled across a variety of media to form a prehistory of the digital age. As technology has accelerated and proliferated dramatically over the past twenty years, artists have continued to monitor its impact. A number of contemporary artists, including Mark Leckey, Henrik Olesen, Seth Price, and Christopher Williams, will be represented in the exhibition. These recent works, while reflecting technological changes, also display a fascination with earlier machines and the types of knowledge and experiences that are lost as we move from one era to the next, constantly dreaming up new futures that will never arrive.

Catalogue
“Ghosts in the Machine” is accompanied by a fully illustrated catalogue featuring essays by Massimiliano Gioni, Associate Director and Director of Exhibitions, Gary Carrion-Murayari, Curator, and art historian Megan Heuer. The publication also includes an anthology of historical sources that have shaped the discourse around technology’s impact on human perception and creativity. These primary documents complement the works in the show by situating them in relation to cultural phenomena like psychoanalysis, cybernetics, and media theory. The book makes hard-to-find articles on kinetic art and Op art newly available, featuring texts by artists George Rickey, Victor Vasarely, Bridget Riley, Otto Piene, and GRAV, as well as curators Peter Selz, William Seitz, and Lawrence Alloway. Also included are a selection of texts on expanded cinema from Gene Youngblood, Stan VanDerBeek, and Paul Sharits, and an account of the art and technology movement by Calvin Tomkins. The catalogue may be purchased at the New Museum Store or newmuseumstore.org ($55 Regular; $44 Members).

Funding for “Ghosts in the Machine” is provided by the David Bermant Foundation.
Additional support is provided by the Swiss Arts Council Pro Helvetia and the Institut für Auslandsbeziehungen e.V.
The accompanying exhibition publication is made possible by the J. McSweeney and G. Mills Publications Fund at the New Museum.