The artists presents their post-apocalyptic movie theatre experience 'Empire Drive-In' as part of Abandon Normal Devices Festival 2012. The multi-media installation will be made from 25 wrecked cars and a 40-foot screen, featuring a specially programmed series of cult classic film screenings. 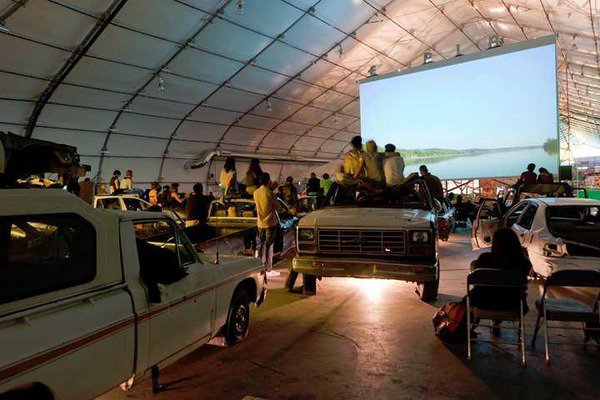 For the first time in Europe, Brooklyn artists Todd Chandler and Jeff Stark will present their acclaimed large-scale, post-apocalyptic movie theatre experience Empire Drive-In as part of Abandon Normal Devices Festival 2012. The extraordinary multi-media installation will be made from 25 wrecked cars and a 40-foot screen constructed of salvaged wood, featuring a specially programmed series of cult classic film screenings (Mad Max II – Road Warrior, RoboCop), live soundtracks and performances. Audiences can climb in and out of the scrap cars to watch films projected on the big screen, with low-power radio transmitting stereo audio directly to each vehicle. Movie-goers will also find snacks at the confection stand and amusement in the playground.

Created in collaboration with a dozen other artists and craftspeople, Empire Drive-in was first built on-site in San Jose, America, over a two-week period, symbolic of the once thriving drive- in industry in the United States. The American drive-in theatre peaked in popularity in the late 1950s and early '60s, concurrent with the domination of the Eisenhower Interstate Highway System and cheap, plentiful gasoline. The prosperous industry has faded since then, and only 381 drive-ins remain active in the United States today, eradicated by strip malls and condos more profitable for large swaths of parking lot than Friday-night movie theatres.

About Tranarchy
Tranarchy are a drag / party / performance / music collective of trannies and show offs; male, female and in-betweeny, born out of the immersive audience experience at AND Festival 2010 when San Francisco's midnight movie Queen, Peaches Christ, rolled into town and raised the call to arms. These switchblade sisters are determined to makeover Manchester, throwing parties to dress to distress for. Composed of Performers, DJ's, Musicians, Film Makers, Misfits & Party Monsters, everyone is welcome and encouraged to roll up and kick off their heels. Tranarchy have already hosted some legendary parties, from Vogue Brawls, Jilted Joyce's Gypsy Wedding, Dirty Minds, Tranarchy Does Showgirls, Outlaw Tram Takeover and Zombie Pride. www.tranarchy.co.uk

About AND
Abandon Normal Devices (AND) is an energetic regional festival of new cinema, digital culture and art. AND's mission is to change the way we think and push the boundaries of audience experience through a programme that spills out from the screens into the streets of the Northwest. It is a unique partnership between FACT (Foundation for Art and Creative Technology) and Cornerhouse. www.andfestival.org.uk

About WE PLAY
WE PLAY is the North West legacy programme for the London 2012 Olympic and Paralympic Games. It represents a diverse range of projects and events, across culture, education and sport, appealing to people from all walks of life.The term WE PLAY implies community, competition, participation, creativity, debate, connections and involvement. www.NWfor2012.com

About Legacy Trust UK
Legacy Trust UK is an independent charity set up to create a lasting cultural and sporting legacy from London 2012 in communities across the UK. The Trust is funded by a £40 million endowment from the Big Lottery Fund (£29m), Department for Culture Media and Sport (£6m) and Arts Council England (£5m), and is a Principal Funder of the Cultural Olympiad and London 2012 Festival.

About Cornerhouse
Cornerhouse is Greater Manchester’s centre for international contemporary visual art and film. A place where all can engage with contemporary ideas through a unique, risk taking, cross art-form and culturally diverse high quality programme of art and film. www.cornerhouse.org