The World in London

The offsite project brings together 204 specially commissioned photographic portraits of 204 Londoners, each originating from one of the nations competing at the London 2012 Olympic and Paralympic Games. Emerging photographers are shown alongside leading national and international artists, such as Faisal Adu'Allah, JH Engstrom, Joakim Eskildsen, Anna Fox and many more. 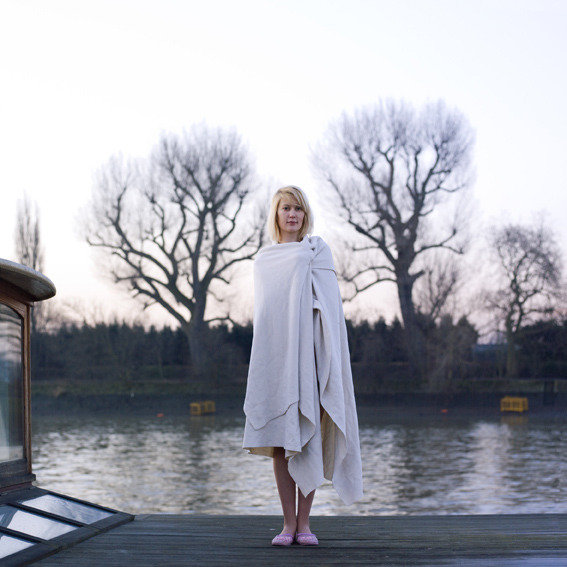 Involving Londoners of all ages and from all walks of life, each portrait is unique in its composition, setting and style, and provides the viewer with an insight into the individual’s story and experience. Judith, a young mother from Haiti, proudly holds her baby daughter. Snezana, a Russian woman, is photographed on her Thames River houseboat wrapped in a blanket, the pink of her slippers accentuating the winter sun behind the bare trees on the opposite shore. Laka, a Mongolian-born Londoner, is portrayed at his workplace, the kitchen of a pub, surrounded by freshly cleaned pots and pans. Lord Paul, who was born in India, is photographed in London Children’s Zoo, a place he has supported for a long time. All of the photographers have been commissioned by The Photographers’ Gallery to take portrait shots of the sitters over the last three years. The image for Great Britain is a portrait of the late Alexander McQueen, the fashion designer legend who was photographed by American born photographer Andres Serrano in February 2009.

The hunt is now on to find the final 6 sitters for the project. The Photographers’ Gallery is looking for Londoners from the following countries to take part: American Samoa, FS Micronesia, Guam, Marshall Islands, Nauru and Palau. Brett Rogers, Director of The Photographers’ Gallery said: As London’s premier institution for photography, we are proud to have initiated a project that engages with the cultural diversity of London at the same time as celebrating photography as one of the most powerful visual mediums of the 21st century. Commissioning such a variety of photographers has offered us an unrivalled opportunity to highlight the creative potential of the portrait genre. Whether seen through the eyes of a celebrated figure or realized by an emerging talent, these portraits reflect an impressive array of approaches to photographing the human figure. Andrew Barnett, Director, Calouste Gulbenkian Foundation, UK said: It is one of the Foundation’s core aims to improve cultural understanding between cultures and through culture. The 204 portrait photographs of this innovative public art project challenge cultural stereotypes and help us to explore the rich diversity of our City, and fits squarely as part of the largest cultural celebration in the history of the modern Olympic and Paralympic Movements.

Moira Sinclair, London Executive Director of Arts Council England, said: London has a long history of welcoming the world; creating an environment where new cultures meet and become part of the very fabric of the city. The World in London will tell some of those stories through the powerful medium of photography, and show that many people from different backgrounds can all be united under the title ‘Londoner’. We are proud to support this project in what will be a very special Olympic year and look forward to seeing the works become part of the city landscape.

In addition to the outdoor exhibition, The World in London images will be presented on a dedicated website (www.theworldinlondon.org.uk) offering access to the personal stories behind each portrait. The website will also feature on the BBC and Arts Council England's experimental arts media service and commissioning programme 'The Space'. A free schools resource has also been produced.

The World in London is supported by the Calouste Gulbenkian Foundation and by Arts Council England and is part of the London 2012 Festival, the 12-week nationwide celebration running from 21 June until 9 September 2012, which will bring together leading artists from across the world and the UK.

The Photographers’ Gallery
The Photographers’ Gallery opened in 1971 in Great Newport Street, London, as the UK’s first independent gallery devoted to photography. It was the first public gallery in the country to exhibit many key names in international photography, including Juergen Teller (fashion), Robert Capa (photojournalism), Sebastião Salgado (documentary) and Andreas Gursky (contemporary art). The Gallery has also been instrumental in establishing contemporary British photographers including Martin Parr and Corinne Day. In 2009 the Gallery moved to 16 – 18 Ramillies Street, the first stage in its plan to create a 21st century home for photography. Following an eighteen month long redevelopment project the Gallery will reopen to the public on Saturday, 19 May 2012. The success of The Photographers’ Gallery over the past four decades has helped to establish photography as a recognised art form, introducing generations of visitors to important names in photography and championing photography’s place at the heart of visual culture. The Gallery’s Chair of the Board of Trustees is Brian Pomeroy, CBE. www.thephotographersgallery.org.uk

Calouste Gulbenkian Foundation
The project is supported by the Gulbenkian Foundation under its Cultural Understanding theme. The Calouste Gulbenkian Foundation is a European charitable foundation established in Portugal in 1956 with cultural, educational, social and scientific interests. Its founder, Calouste Sarkis Gulbenkian, was an Armenian born near Istanbul. Multicultural and multilingual, and a noted art collector, he spent his career bringing people from different cultures and nationalities together. Based in Lisbon with branches in London and Paris, the Foundation is in a privileged position of being able to address national and transnational issues and to act as an ‘exchange’ for ideas. The purpose of the UK Branch, based in London, is to help enrich and connect the experiences of people in the UK and Ireland and secure lasting, beneficial change. One of our core aims is to improve cultural understanding between cultures and through culture. www.gulbenkian.org.uk

Arts Council England
Arts Council England champions, develops and invests in artistic and cultural experiences that enrich people’s lives. It supports a range of activities across the arts, museums and libraries – from theatre to digital art, reading to dance, music to literature, and crafts to collections. Great art and culture inspires us, brings us together and teaches us about ourselves and the world around us. In short, it makes life better. Between 2011 and 2015, it will invest £1.4 billion of public money from government and an estimated £0.85 billion from the National Lottery to help create these experiences for as many people as possible across the country. www.artscouncil.org.uk

London Borough of Tower Hamlets
Tower Hamlets is the heart of the East End. Rich in history, it presents a vibrant mix of old and new, creating a bustling community unique in culture and character. Taking its name from the Tower of London and the hamlets that surround it, Tower Hamlets covers an area of eight square miles and has a population of around 220,000. It is bounded by the Thames to the south and the boroughs of Newham (east), Hackney (north) and the City of London (west). As one of the six Olympic host boroughs, the council is looking to maximise the benefits that London 2012 will bring to the borough's residents. Projects include the £11 million High Street 2012 programme which is rejuvenating the thoroughfare that links the city to the Olympic Park. Visit www.towerhamlets.gov.uk

Press information
For further press information on The World in London and to request images please contact:
Inbal Mizrahi on +44 (0)20 7087 9333 or email inbal.mizrahi@tpg.org.uk
Catherine McClelland or Anna Jones on + 44 (0)20 7183 3577
or email catherinem@suttonpr.com / anna@suttonpr.com