Late Paintings. The exhibition features major works from 1969 to 1978. When the artist left New York for the small town of Woodstock, he reintroduced figuration to his paintings; cartoon-like in quality they began to incorporate images familiar to him since childhood. 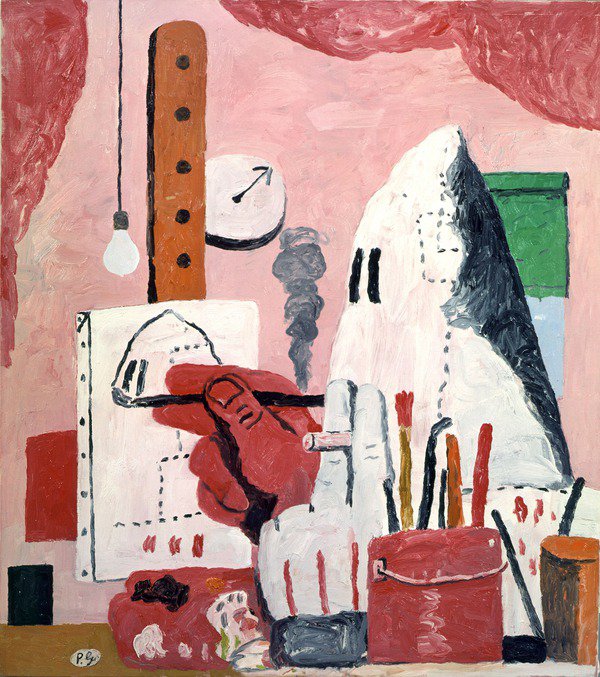 The first exhibition by the great American artist to be staged in Scotland, Philip Guston: Late Paintings features major works from 1969 to 1978, shown in the naturally-lit rooms of Inverleith House overlooking the Royal Botanic Garden Edinburgh.

Born in Montreal, Canada, Philip Guston (1913-1980) grew up in Los Angeles where he attended high school with Jackson Pollock. Largely self-taught and politically aware, he worked during the 1930’s as a mural painter in Mexico and the U.S. Moving to New York in 1936 he became a celebrated member of the first generation of Abstract Expressionists in the 1950’s.

In 1967 Guston left New York for the small town of Woodstock, N.Y. and reintroduced figuration to his paintings; cartoon-like in quality they began to incorporate images familiar to him since childhood – from the hooded figures of the Ku Klux Klan, to everyday objects such as lightbulbs, shoes and cigarettes. When these paintings were shown for the first time in 1970, they proved highly controversial but rapidly gained critical recognition. The ‘late’ paintings made during the last 13 years of the artist’s life are now widely regarded as some of the most compelling and influential works of the late 20th Century.

The exhibition is presented with the support of the Artist’s Estate and the McKee Gallery, New York. An illustrated catalogue featuring an interview with the art historian Dr. David Anfam and an essay by the writer Philip Larratt-Smith accompanies the exhibition.

Image: The Studio, 1969 Courtesy of the Estate of Philip Guston

In the contest of Edinburgh Art Festival