As with all too many artists of his generation, there is less public recognition of his important work at the moment. This exhibition includes work from the past two years. They are testaments to persistence, hard work, and an unflagging curiosity. 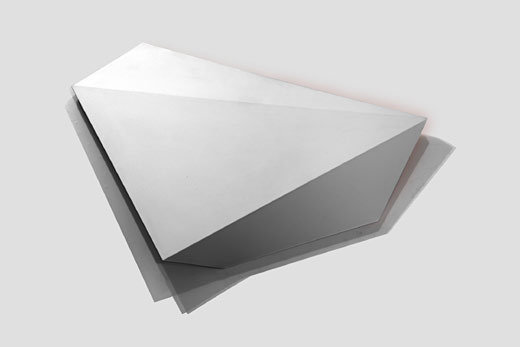 MARC STRAUS is proud to present new paintings by Charles Hinman in his inaugural gallery exhibition, on view from September 5th, 2012.

An American pioneer of hard-edged shaped canvases, Charles Hinman’s work received immediate global acclaim in 1964 – 5, with work at Sidney Janis Gallery and a one-person exhibition at Richard Feigen Gallery. Major works found permanent homes at MoMA, the Albright-Knox Gallery, and the Rockefeller Collection. He was included in the landmark show Young America at the Whitney Museum in 1965. Also in that year, Henry Geldzahler and Frank Stella included Hinman in the seminal exhibition, Shape and Structure, paired with Donald Judd, Robert Morris, Carl Andre, and Larry Bell.

Hinman’s work foreshadowed and influenced an important generation of artists. There have been numerous museum shows in the years since, including at the Everson Museum and three at the Butler Institute of American Art. He has received many awards, including from the Pollock-Krasner Foundation, and is a current recipient of a Guggenheim Fellowship.

Made from canvas and wood, these are paintings, but they are contradictory to the stiff, rectangular picture plane. Frank Stella’s journey towards more detailed wall reliefs (which he famously always referred to as paintings) are presaged by Hinman.

His array of sculpted canvases energizes the space on surrounding walls. Various facets of his new white-primed rhomboids and diamonds are painted behind, or in front, in bright, saturated hues creating a fascinating play between literal and illusionistic depth. In some “Gems”, colors are reflected off the wall, thus allowing for the wall and the interstices to be reconsidered as foreground and ground. In others works, “Twists”, bands of bent colors are best viewed from the sides. As we move we perceive the work differently: new colors, new facets, new forms, new shadows, as the work is constantly reinvented.

As with all too many artists of his generation, there is less public recognition of his important work at the moment. This exhibition includes work from the past two years. They are testaments to persistence, hard work, and an unflagging curiosity. These are arguably his finest works and are pertinent and timely. Hinman’s formal language persists but the work is even more joyous and unabashedly beautiful.

MARC STRAUS opens its second season with Charles Hinman, who will turn 80 this year. The gallery is in a three-story Lower East Side building that had been a tenement and then home to various immigrant trades. The program consists of 15 artists from 9 countries, most young, and many of whom have not shown in the US before.