Untitled (The Buran Program). The Buran Program was a Soviet and later Russian reusable spacecraft project that began in 1974 and was formally suspended in 1993. It completed one unmanned orbital spaceflight in 1988 before its cancellation in 1993. 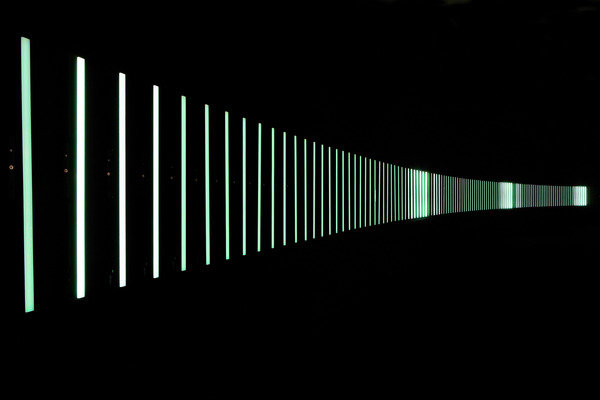 The Norwegian artist Børre Sæthre utilizes large-scale installations to create at- mospheres that shift between the technological ambiences of futuristic panora- mas and the influence of their synthetic perversities on the primordial desires of our collective subconscious. Abstracting pre-fabricated and quotidian forms, the artist constructs environments that hum with a din that is at once mesmerizing and yet out of reach. One could view these installations through the lens of an ar- chitect, an artist, a writer, a scientist, a filmmaker, and yet the conclusions one would draw from these vantage points would be inconclusive and it is perhaps here that we find the core to Sæthre’s program: the conclusions of our collective star gazing have yet to be written.

In a recent exhibition, Untitled (Wardenclyffe Tower) at Mudam - Musée d’Art Mo- derne Grand-Duc Jean, Luxembourg, Sæthre cloaked the museum hall in a blac- kness that was punctuated (strobe-like) with patterned light fields and a two-part soundtrack that physically vibrated and metaphorically animated a solemn en- semble of preternatural objects: a bronzemirrored geodesic dome, a 100 square meter chrome relief. An organic cast of a dying star made from beeswax and strung from a noose-like rope over a shallow podium offset this brooding narrative along- side a short film in which a boy hurls lightning bolts (or Force Lightning) inside his teenage bedroom.

For the artist’s exhibition at Loevenbruck gallery he will show a series of new works, and the project is titled Untitled (The Buran Program).

The Buran [Russian: Буран, IPA: [bʊˈran], Snowstorm or Blizzard] Program was a Soviet and later Russian reusable spacecraft project that began in 1974 and was formally suspended in 1993. It was a response to the United States’ NASA Space Shuttle program. The project was the largest and the most expensive in the history of Soviet space exploration. The Buran Program completed one unmanned orbital spaceflight in 1988 before its cancellation in 1993.

Børre Sæthre was born in Oslo, Norway, in 1967. He lives and works in New York and Oslo.

After completing his training at the Oslo Academy of Fine Art (1992-1998), Børre Sæthre was awarded a residency on the prestigious International Studio & Curatorial Program, New York, in 2000, followed by another at the Künstlerhaus Bethanien, Berlin, in 2001.

Børre Sæthre will be presenting a new monumental installation in Fantastic 2012, an exhibi- tion at the Tri Postal, Lille, from 6 October 2012 to 13 January 2013.