Mises en scene. A proposal on the staging in contemporary photography. A colourful and wacky universe sometimes disturbing that constantly questions the place of humans in the Western world, exploring his inner world. 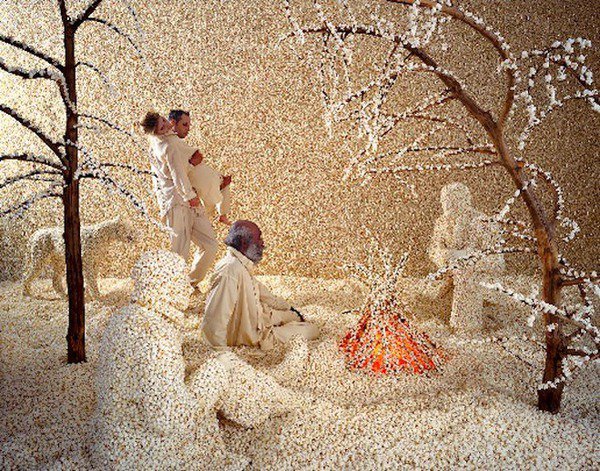 For its exhibition after the summer, Inception Gallery presents a proposal on the staging in contemporary photography.

Away from concepts of mid-twentieth century about the “decisive moment” by Henri Cartier-Bresson, or Brassaï’s photojournalism or even Walker Evans, photography becomes an object of study: the staging of the scenery, characters, gestures until the shooting. Staging close to the golden age of Dutch painting, or more generally of the Flemish genre painting of the seventeenth century: a representation of the characters which no specific identity can not be attached, they are neither portraits nor representations of historical figures. They are representations of characters that are alone, everyday topics, idealized postures (mannered).

These three artists have also in common the mix of genres: sculpture, model, painting, sewing, live model. Everything is frozen in a photograph with a unique perspective that will remain as the trace of a visual work that could be described as an installation. Photography critics use often the term “Photographic Pictures” for qualified. We think therefore in Georges Rousse or the Land Art with Christo for example, whose photography is the memory of an installation and a staging whose implementation is made in the space and design in the plan.
Sandy Skoglund

American photographer born in 1946, she teaches photography at Rutgers University in New Jersey in the United States. In 1980 the artist became known for her work “Radioactive Cats”: the interpretation of an interior space with topics about social differences in aging, nuclear war and its consequences. The axis of the artist’s work has been the same the most part of the time during all these years.

Invasion and choking are one of the first axes of her works: it is caused by the repetition of elements, almost systematic, which examines the notion of space. The space of the work, the notion of size limits, but also that one reserved for the man. The feeling of suffocation and threat is caused by the increasing multiplication of elements. The space is re-examined and the place of free will is contested, see invaded. It is obvious the relation with the work of surrealists like Magritte.

Secondly, the work of Sandy Skoglund questions time. The multiplication of poses and attitudes is reminiscent the chronophotography of Etienne-Jules Marrey. However, Sandy Skoglund poses don’t have the same temporal continuity.

In a third step, we can notice the multiple techniques to arrive at the photographic cliché. She makes herself all the elements of her photographies in her studio and she fixes a single viewpoint with her film camera. There is a unique perspective of her work, which is unchangeable.

Themes covered are varied: the war, the link between human and nature, consumerism, cloning, the artificial. A colourful and wacky universe sometimes disturbing that constantly questions the place of humans in the Western world, exploring his inner world: the unconscious, the dream and the paradox of surrealists.
Cerise Doucede

Born in 1987 in Toulon in France, Doucède won the Royal Monceau photography contest in 2012. Nan Goldin, David Lynch, Youssef Nabil or even Martin Parr have all participated in this program for a dialogue between an art project and the mythical and modern Lady Dior bag.

Her background is related to the design and creative business. After studying graphic design, she discovered photography that was as a simple tool to fix her achievements and with the time it became the very purpose of her work.

The photographic tool is an extension of her world; it is the result of learning about volume, shape; it’s a cosmos that will lead to a layout. Her unusual world of the levitation of objects has as departure point in a dream where fallen leaves of a tree had no gravity. A feminine and poetic proposal about what imagination implies in the artistic creation of Cerise Doucede.