The Alchimist. What he achieved in the darkroom in terms of physical-chemical work could well be called alchemy. Already established as a poster artist, photographer and photo collagist in the early 1930s, he started afresh and created entirely new groups of works in the 1950s. The exhibition features over 200 photographic works from his later years. 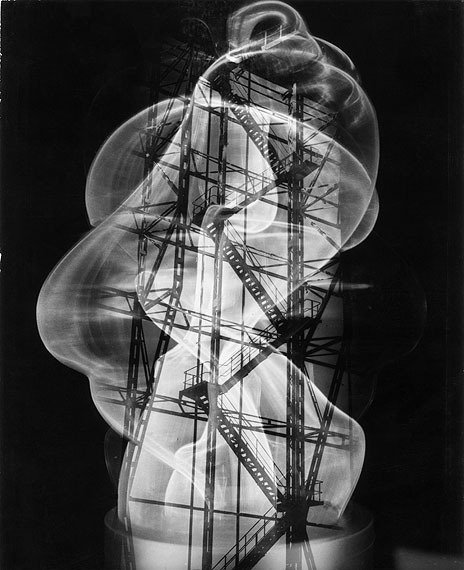 What László Moholy-Nagy did for the photography of the Bauhaus and of the 1920s, Heinz Hajek-Halke accomplished for the 1950s and Abstract Art. Hajek-Halke (1898-1983) was an artist who worked in a genuinely photographic manner: what he achieved in the darkroom in terms of physical-chemical work could well be called alchemy; even today, no software program is able to achieve the same effects.

Among the photographic artists of the twentieth century, Heinz Hajek-Halke was a maverick who did not belong to any school and nonetheless influenced many others. Already famous as a poster artist in the early 1930s, he reached artistic maturity in the 1950s. He is one of the great abstract artists and also one of the first artists in photography.

The Akademie der Künste has over 200 photographic works from his later years, which is being presented comprehensively for the first time in the exhibition on Pariser Platz. The exhibition offers one of the few rediscoveries that can still be made in twentieth-century art photography.

The exhibition will be accompanied by a catalogue (German/English) published by Steidl.

Within the context of the European Month of Photography Berlin, www.mdf-berlin.de, and the Berlin Art Week, www.berlinartweek.de

[Biography]
Heinz Hajek-Halke was born in Berlin in 1898. He spent his childhood in Buenos Aires and returned in 1910 to Berlin where he attended school and art college. He served as a soldier for two years during the First World War. From 1918 to 1920, he studied at the School of Arts and Crafts in Berlin where Emil Orlik taught him, among others. He then worked as a commercial graphic artist. His interest in photography began in 1924. During the years ahead he created a wide range of works including posters, advertisements, compositions and press photographs, collaborating partly with photographers like Yva and Martha Astfalck-Vietz. From 1934 to 1946, Heinz Hajek-Halke lived in Kressbronn, Lake Constance, where he bred small animals and continued his photographic work. During the early 1950s, he lived in Ehrenbreitstein near Koblenz and exclusively concentrated on experimental and abstract photography. His works were exhibited alongside other examples of “subjective photography”. In 1955, Karl Hofer appointed him as Lecturer in Photographics at the Hochschule der Bildenden Künste, (now the Berlin University of the Arts) where he lectured until 1967. When photography became an established artform in about 1965, Heinz Hajek-Halke, too, earned wider acclaim: by the late 1970s, he had successfully curated several solo exhibitions. He was also represented in numerous group shows and awarded several photography and art prizes. During this period, however, his health deteriorated. In 1973, he sold all his pictures and materials to the photographer Michael Ruetz. In spring 1983, Heinz Hajek-Halke died in Berlin.

[Introduction]
Alchemists are solitary individuals who experiment in a grey area between art and science and Heinz Hajek-Halke was an individualist par excellence among 20th century photo artists. He was not an affiliate of any school in particular, although he taught and influenced many others. Already established as a poster artist, photographer and photo collagist in the early 1930s, he started afresh and created entirely new groups of works in the 1950s. These made Heinz Hajek-Halke’s name as the first genuinely abstract photo artist. No exhibition of this era was complete without his pictures. Thanks to a foundation set up by the owner of the artist’s estate, Michael Ruetz, the Academy of Arts, Berlin has a collection of over two hundred light graphics – a term coined by the art critic, Franz Roh – that date from Heinz Hajek-Halke’s late work. These clearly chart his development from surrealist and often ironic over-exaggeration of the existing pictorial world to a formally stringent, but surprisingly rich cosmos of the individual imagination. Yet there is no particular chronological order. Time and again, his previous solutions were reviewed to decide whether or not they could support further experiments. Throughout this process Heinz Hajek-Halke always remained a photographer, even if many pictures were the result of his preliminary sketches. His preparatory work transformed his photographic prints into pictures in their own right; he thus relied on a modern, alchemist’s practice.