Archipel. The Berlin-based architect has transformed the exhibition space into an insular urban landscape made of concrete (with various additional substances) using elements from previous exhibitions. By reusing and re-inscribing extant elements, a collage of various time-space interventions is created according to the principle of architectural restructuring. 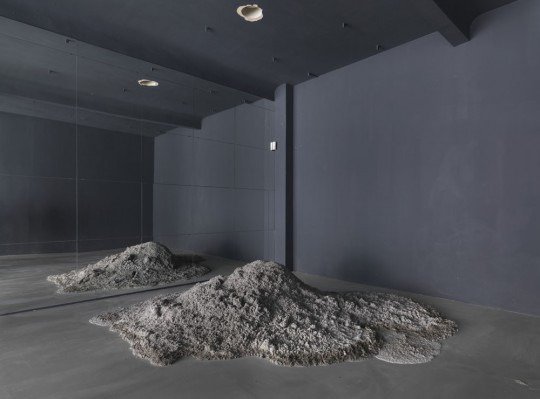 The exhibition Archipel is the first solo show of the Berlin-based architect Arno Brandlhuber (b. 1964) at an institution of visual art. Brandlhuber participated in the Venice Architecture Biennale (2012, 2008, 2006, 2004), designed, with Thomas Demand, the German pavilion at the São Paulo Biennale (2004), and presented his designs all over the world; he has also received numerous German and international architecture awards. Brandlhuber has transformed the exhibition space at Neuer Berliner Kunstverein into an insular urban landscape made of concrete (with various additional substances) using elements from previous exhibitions: Karin Sander’s drillings (2011) serve as openings for the pouring concrete and Olafur Elliason’s Forever Lamp (2011) from the exhibition The Future Archive (2012) provides the lighting. The concrete in the exhibition space grows into an abstract urban landscape of Berlin consisting of several linked units that can be entered by the visitor. The mirrored walls amplify the spatial effect of insularity. By reusing and re-inscribing extant elements, a collage of various time-space interventions is created according to the principle of architectural restructuring. In addition, the soundtrack of an advertisement from Philippe Starck’s architecture and design project Yoo Berlin can be heard. Neuer Berliner Kunstverein and Arno Brandlhuber began their collaboration in 2011: in an election campaign poster RGB 165/96/36 CMYK 14/40/80/20 (2011) for the local Berlin elections (available as an n.b.k. Edition), Brandlhuber demanded alternatives from policy makers to construction plans and the linked social order.

The title is taken from Oswald M. Unger’s urban concept Die Stadt in der Stadt: Berlin—Das Grüne Archipel (The City in the City: Berlin—The Green Archipelago). This study was written by Ungers in 1977 during a summer academy in Berlin, together with Rem Koolhaas, Hans Kollhoff, Peter Riemann, and Arthur Ovaska. Against the backdrop of West Berlin, at the time a shrinking city, the study focused on issues or urban renewal. The plan suggested creating identifiable, condensed islands of urbanity with various temporary uses embedded in a green strip with the required technical infrastructure, making the city into a “green archipelago.” In today’s reunited Berlin, the current redesign of the city can be linked to questions of social policy, but also to questions pertaining to the architecture of the Berlin Republic and international discourses on urban development. The social city possible today as a natural-cultural space can be examined by borrowing from Ungers’ concept of “the city in the city.” As a point of departure, Arno Brandlhuber began with an artistic dystopia created by mixing all the colors of the political spectrum (RGB 165/96/36 CMYK 14/40/80/20) and then with concrete (Archipel). What was conceived in 1977 as condensed urban space today proves to be a process of homogenization that has taken hold of entire parts of the city: from the center of the new Berlin to the marginal areas of the Plattenbau housing estates of what were once the expanding outskirts of East Berlin, which now increasingly house the city’s poor.

Book series “n.b.k. Exhibtions”
A collection of materials and projects created by Arno Brandlhuber will be published by Buchhandlung Walter König, Cologne, in conjunction with the exhibition. The publication is supported by Stiftung Kunstfonds Bonn.

In parallel with the exhibition at the Neuer Berliner Kunstverein, Arno Brandlhuber also presents work at gallery KOW from September 8 to October 20, 2012.