In her most recent film and photographic projects, Gillian Wearing has once again expanded her artistic approach and further developed her originating themes, which include the relationship between individual and society, as well as anxiety, trauma, sex, and death, in consistent ways. The exhibiton features approximately 40 works dating from 1992 to the present. 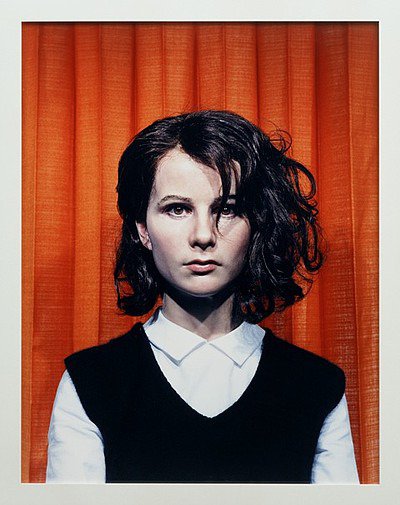 Gillian Wearing has from the beginning set everyday life and society, questions of identity and collective trauma, human psychological depths and the absurdities of social conventions in the foreground. With Gillian Wearing (8 Sept 2012 – 6 Jan 2013), the Kunstsammlung Nordrhein-Westfalen not only presents the first major survey anywhere of Wearing’s artistic achivement, but also the first substantial solo exhibition in the German-speaking world of this London-based artist. On view at the K20 Grabbeplatz will be approximately 40 works dating from 1992 to the present.

Issues of identity, of social roles, and of the shaping of one's own existence are central to the films, videos, photographs, and installations created by Wearing, who was born in Birmingham in 1963. In 1997, she received the prestigious Turner Prize for her video installation Sixty Minute Silence; in the 1990s, she participated in all of the exhibitions of the Young British Artists.

Gillian Wearing uses photography and film in order to realize her project-style and often process-oriented works. Many works are staged retellings, documented confessions, or narrations of pipe dreams. Masks and costumes have central functions in her work, which is shaped by a pronounced awareness of the culture of images and of questions of medial transmission. Documentary and psychotherapeutic procedures, all the way to the codes of reality TV, are transferred into her images, which simultaneously cite and offer resistance to the visual language of popular culture.

This artist achieved celebrity virtually overnight in the early 1990s through her photo series: Signs that say what you want them to say and not Signs that say what someone else wants you to say (1992-93). Passersby, selected by chance, were asked to allow themselves to be photographed together with a sheet of white paper on which the portrayed individual had written a highly personal message. In this searching portrait series, which has been compared with historic photos by artists ranging from August Sander to Walker Evans, Wearing generates astonishing links between word and image – when the businessman directs his gaze at the camera with a friendly smile, although his sign reads: “I’m Desperate.”

Another “Gillian Wearing classic” is Confess all on video. Don’t worry, you’ll be in disguise. Intrigued? Call Gillian (1994). In this 30-minute-long video, Gillian Wearing extends her social researches into post-Thatcher-era England. Long before the emergence of the corresponding television format, a variety of individuals verbalize their most personal feelings in front of the artist’s camera. Here, she uses masks for the first time in order to insure the anonymity promised to her subjects. Disturbing childhood or youthful experiences are also the basis for the video installations Trauma (2000) and Secret & Lies (2009): these are presented in specially constructed “confession boxes” which position viewers in intimate proximity to “confessers.” Formative experiences of childhood and youth are dealt with as well in the extensive project Family History (2006). Here, she invokes Family, one of the earliest British reality television series, which dates from 1974. A large-scale video installation, Family History (2006) will be presented in Düsseldorf for the first time after its premiere showing in Great Britain.

Produced from 2007 to 2010 was Gillian Wearing’s first film, entitled Self Made, which was acclaimed at international film festivals and has been running in British cinemas since September of 2011. Once again, production of the 80-minute film began with an advertisement and a casting process: “Would you like to be in a film? You can play yourself or a fictional character. Call Gillian.” The film accompanies a group of seven people who take part in an acting workshop. Participants develop their roles – which are ultimately acted out in filmed scenes – from their own biographies, as well as their private dreams and desires. Self Made will be screened in several Düsseldorf cinemas during the exhibition.

In her most recent film and photographic projects, Gillian Wearing has once again expanded her artistic approach and further developed her originating themes, which include the relationship between individual and society, as well as anxiety, trauma, sex, and death, in consistent ways. With expert assistance from Madame Tussaud’s Waxworks Museum, Wearing fashioned the masks which appear in the photo series Album (2003) and in striking photographic black-and-white large-format images such as Me as Mapplethorpe, Me as Warhol, Me as Arbus (2008-2010). Created especially for this exhibition – which was shown in London before traveling to Düsseldorf – are two additional works in this series, through which Wearing thematizes her artistic affinities: Me as Cahun Holding the Mask of My Face, and Me as Sander.

The English-language catalog is being published by Ridinghouse, London, and the German edition by Walther König. Featuring numerous illustrations, the 214-page catalog provides a wide-ranging overview of Gillian Wearing’s oeuvre and contains transcripts as well as German translations of the video works. Published here for the first time will be an extensive series of images, drawn from the artist's own archive, which shed light on her artistic production. This catalog – with its numerous illustrations and essays by Doris Krystof, Daniel F. Herrmann, Bernhart Schwenk, and David Deamer – is the first German-language monograph on Wearing.

The exhibition is being organized in collaboration with the Whitechapel Gallery in London and the Pinakothek der Moderne in Munich.

The Düsseldorf station is funded by the German Federal Cultural Foundation.