The Grand Domestic Revolution GOES ON

Inspired by US late nineteenth-century 'material feminist', GDR involved artists, designers, domestic workers, architects, gardeners, activists and others to collaboratively experiment with and re-articulate the domestic sphere challenging traditional and contemporary divisions of private and public. 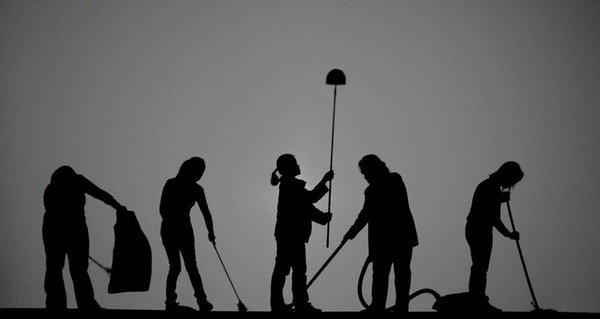 The Grand Domestic Revolution (GDR) is an ongoing ‘living research’ project initiated by Casco – Office for Art, Design and Theory, Utrecht as a multi-faceted exploration of the domestic sphere to imagine new forms of living and working in common.

Inspired by US late nineteenth-century ‘material feminist’ movements that experimented with communal solutions to isolated domestic life and work, GDR involved artists, designers, domestic workers, architects, gardeners, activists and others to collaboratively experiment with and re-articulate the domestic sphere challenging traditional and contemporary divisions of private and public. Now GDR goes on, evolving in different scales and extensions, taken up and transformed in different cities, sites and neighbourhoods by those who desire to carry on the GDR from their own home base or by those already engaged with it in their local languages and practices.

At The Showroom an exhibition of contemporary and historical artworks and a diverse and growing reference library will form a base for workshops and events that will develop the GDR further, while they will forge connections and affinities with The Showroom’s ongoing programme of neighbourhood-based commissions – Communal Knowledge.

Exhibited works employ a wide range of methodologies to playfully problematise domestic issues such as work at home, housing rights, property relations, family economies, neighbourhood struggles, and range from the satirical to social critique and activist actions. These include GDR’s cooperatively produced sitcom, Our Autonomous Life? (2010–11); Pauline Boudry and Renata Lorenz’s housewives’ manifesto Charming for the Revolution (2009); Rehana Zaman’s Like an Iron Maiden Trapped Between a Rock and Hard Place (2010); and a shadow-play work I will not ask anything about you, you will not ask anything about me (2011) produced by domestic workers in the Netherlands in collaboration with Matthijs de Bruijne, and public cleaning actions by a group of cultural workers intersecting art work and domestic work, ASK! (Actie Schone Kunsten). A new video work by artist Joseph Williams, a member of the homeless artist collective Seymour Arts, will be produced and presented. A full list of works and events will be available on The Showroom’s website www.theshowroom.org.

The Grand Domestic Revolution GOES ON is realised in the framework of COHAB, a two-year project initiated by The Showroom, Casco - Office for Art, Design and Theory, Utrecht and Tensta Konsthall, Stockholm, supported by a Cooperation Measures grant from the European Commission Culture 2007-2013 Programme. It has been additionally supported by: Mondriaan Foundation, Arts Council England, Outset Contemporary Art Fund, as The Showroom’s Production Partner 2012, and The Showroom Supporters’ Scheme. Communal Knowledge is generously supported by Paul Hamlyn Foundation, The Esmée Fairbairn Foundation and John Lyon’s Charity.

8pm 'Penfold's Cupboard' a temporary restaurant founded in collaboration between Bahbak Hashemi-Nezhad and senior citizens from 60 Penfold Community Hub. Opening for the first time to serve dinner for GDR visitors.