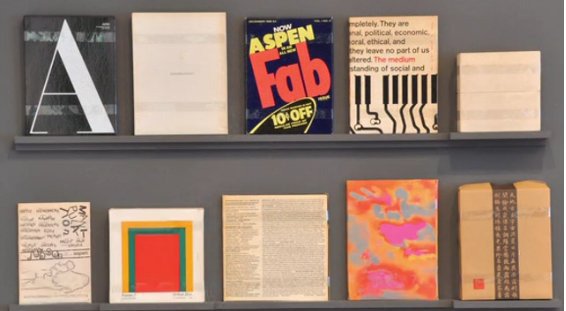 The display is curated by Nayia Yiakoumaki, Archive Curator

Issued in a box, Aspen was the first multi-media magazine and became a time capsule of the period. Contributions included a Pop Art detergent box cover by Andy Warhol and David Dalton, a diary by John Lennon and a sewing pattern by Ossie Clark. Each distinctive issue had a different editor and designer who took complete control of the magazine. Aspen included posters, booklets, reels of Super 8 film, flexi discs, original artworks and phonographic recordings.

Highlights include Andy Warhol and David Dalton’s Pop Art issue devoted to the New York art scene. A special British issue was created which contained British knickers, a sewing pattern by Ossie Clark, souvenirs found by Peter Blake and The Lennon Diary 1969, a diary of the future written by John Lennon in 1968. Other highlights include concrete poetry by Ian Hamilton Finlay, films by Robert Rauschenberg and Robert Morris and phonographic recordings by Yoko Ono and John Lennon.

A conceptual issue, edited and designed by David Dalton and Brian O’Doherty, featured essays by Roland Barthes and Susan Sontag , a work by Mel Bochner and a range of spoken word recordings by William S. Burroughs, Merce Cunningham, Marcel Duchamp and Naum Gabo. A psychedelic issue was edited by Angus MacLise, the original drummer from the Velvet Underground, and Hetty MacLise and included stamps of nude psychedelic portraits and postcards by Ira Cohen.

Aspen was conceived by Phyllis Johnson, a former editor for Women’s Wear Daily and Advertising Age, in New York and was inspired by Aspen, Colorado, a popular ski resort in the 1960s. While the first issue started with subject matter closely linked to the resort, it evolved into a document which captured the major artistic movements of the time.

The final issue of Aspen was published in 1971and despite the short period in which it was published, the magazine paved the way for the future of art publishing with its ground breaking format. Alongside Aspen, a range of artist magazines from the 1960s to the present day will be shown. The exhibition is part of the Whitechapel Gallery’s dedicated programme looking into archives of individual artists or institutions.

Aspen Magazine was first published in 1965. 10 issues were created at irregular periods and due to difficulty securing advertising and increased postal costs for the unusual format, the final issue was published in 1971.

Issues will be lent from the Victoria and Albert Museum, London, Museu d'Art Contemporani de Barcelona (MACBA), the Irish Museum of Modern Art (IMMA) and The Special Collections at Chelsea College of Art & Design Library.