The project by artist/architect collaboration Warren & Mosley with Can Altay brings together three different sports staged simultaneously in the same arena, with each game played according to its own rules. 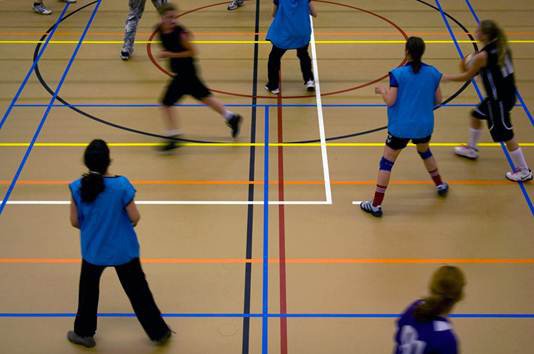 Are you a spectator or player? Rogue Game uses play as a device to reconfigure familiar territories and activities. The project by artist/architect collaboration Warren & Mosley with Can Altay brings together three different sports staged simultaneously in the same arena, with each game played according to its own rules. In doing so, it constructs situations that give rise to moments of improvisation, subversion, ingenuity and chance, proposing itself as a metaphor for how we might share the urban realm.

This ongoing work sees the game evolving and mutating according to each location in which it is realised. Warren & Mosley, both Spike Island studio holders, originally conceived Rogue Game with Istanbul-based Altay during the latter’s residency here in 2007. The project has since been produced at The Showroom in London, Smart Project Space in Amsterdam and Casco in Utrecht. At Spike Island, the artists configure the entire gallery space as an immersive environment of play, which includes newly commissioned works.

The markings of multiple game courts — here five-a-side football, basketball, touch rugby and volleyball — are transplanted into Gallery 1, introducing the architecture of the multipurpose sports hall into the space. Through this simple overlaying of time and space, players must negotiate their own game and those of others. As Rogue Game is played, the struggle between the three games and their players begins to exchange known rules for new, ever-changing strategies.

In Gallery 2, Rogue Game Replay stages a mediated setting in which methods for scrutinising the event are continually developed. Here a negotiation between the action and the image plays out: a live commentator develops a lexicon of Rogue Game while two editors rework live and recorded footage across multiple screens. These additional players attempt to embody the characteristics of Rogue Game as they react to the temporal and performative nature of the proposition.

The exhibition culminates in a symposium on Saturday 29 September that addresses the themes of Rogue Game: participation and performance, the experienced and the imaginary, the live and the recorded, the individual and the collective. Convened by Can Altay with Warren & Mosley, speakers including Paul O’Neill, Emily Pethick, Axel Wieder and Bridget Crone consider play, transgression and hybridisation as speculative devices within the gallery and the wider urban landscape.

Sophie Warren (1969) is an artist and Jonathan Mosley (1967) is an architect. Working with event, installation, images and words, they pursue a critical spatial practice that employs strategies of play, hybridisation and the construction of imaginary architectures to resist homogeneous perceptions of urban space.

Recent shows include Rogue Game with Can Altay at Casco, Utrecht (2011) and The Showroom, London (2010), The Right to the City, Tin Sheds Gallery, Sydney (2011), and Coalesce: Happenstance, Smart Project Space, Amsterdam (2009). A book of their recent project Beyond Utopia was published by Errant Bodies Press, Los Angeles/Berlin.

Mosley is senior lecturer at the University of the West of England in Bristol where he leads the MA Architecture programme.

Can Altay is an artist living in Istanbul. He investigates the functions, meaning, organisation and reconfigurations of public spaces. Altay’s “settings” provide critical reflection on urban phenomena and artistic activity. His work is staged and manifested through the spaces and publications he produces.

Altay has had solo exhibitions at Casco, Utrecht (2011), The Showroom, London (2010), Kunstlerhaus Bethanien, Berlin (2008), Sala Rekalde, Bilbao (2006) and Spike Island, Bristol (2007). His work has been included in Biennials of Istanbul, Havana, Busan, Gwangju, Taipei; and in museums and galleries such as the Walker Art Center (USA), VanAbbe Museum (Netherlands), ZKM (Germany), P.S.1 MoMA (USA), and Platform Garanti (Turkey). He was recently commissioned by London 2012 Festival and Frieze Foundation to develop a public artwork.

Altay is the founding editor of Ahali: A Journal for Setting a Setting, and works as an academic in the fields of art and architecture.

Spike Island is an international centre for the development of contemporary art and design. It is a place where artists and the public can meet, enabling audiences to engage with artists’ research and production. It also creates pathways for artists and other creative producers by nurturing a rich arts ecology that supports professional development beyond the confines of the organisation.

Within the 80,000 square foot building, Spike Island offers visitors a year-round programme of exhibitions, events and activities in the central gallery spaces, designed by Caruso St John, as well as providing working space for artists, designers and creative businesses.

Artists Sophie Warren and Jonathan Mosley lead a free exhibition tour on Saturday 8 September at 2pm. Other related events include an Artists’ Games Night on Thursday 20 September and the Rogue Game symposium on Saturday 29 September. More information is available at www.spikeisland.org.uk.