Film is the medium that pulls together the various lines of enquiry that inform Sietsema's practice. A new series of works on reclaimed canvas take as their subject arrangements of objects relating to cliched ideas of work in the classical studio. 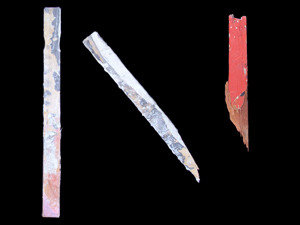 Drawing Room presents the first major exhibition by Paul Sietsema in the UK. The exhibition will include new, previously unseen works.

Sietsema’s drawings and films reveal an interest in the materiality of objects and images combined with a more conceptualised concern with the legacies of past eras of cultural history and the contextualisation of artefacts, the process of image making and changing conceptions of what constitutes material.

Sietsema has said: ‘Drawing has always been the beginning and, perhaps, the end of every project I make. Not making sketches per se but investigating the relationships between imagery, form, and material that dominate in our mediated experience in the world’. The exhibition includes four sailboat drawings Calendar boat 1, 2, 3 and 4, all made in 2012 using ink on paper. The scale of the images, and the repeated ‘frames’, with their stilled image and subtle, non-linear transformations to the palette, pay homage to stasis, a quality of structuralist film that informs much of Sietsema’s practice. To duplicate the image, Sietsema has employed techniques borrowed from pre-digital manuals for touching up photographs. Using latex to mask out sections of the image, he has employed this restoration technique to build the image bit by bit from a blank sheet of paper, effectively making the image in reverse.

Blue Square 1 and Blue Square 2 (2012) take as their subjects a torn sheet of paper and a broken frame. Sietsema has rendered, editing as he does so, the creases, tears and scuffs of the blue backing paper. The abstract lines on the accompanying picture are formed from the broken frame parts. In this work abstraction – the square of the paper, the lines of the wood – collide with representation – the rendered sheet of paper and partly dismembered frame.

A new series of enamel works on reclaimed canvas take as their subject arrangements of objects relating to clichéd ideas of work in the classical studio, such as paint-filled brushes, spilled paint, and a hammer, chisel and nails captured in a pool of paint. These are photographed and the area the paint pool defines is digitally clipped from its background. The manipulated image is then painted in enamel onto the found canvas support. The inevitable slippages and miss-registers that result from a combination of analogue and digital techniques add to the ambiguity of the image and the process of production.

Film is the medium that pulls together the various lines of enquiry that inform Sietsema’s practice. Telegraph (2012) is composed of a series of photographs of splintered wood arranged to form a letter of the alphabet, which, over the course of the film reads: L/E/T/T/E/R T/O A Y/O/U/N/G P/A/I/N/T/E/R. Whilst the process of making a digital film is mostly imperceptible, the mechanical quality of this 16mm film is made palpable as its technology is redundant in current information exchange and its physical means of production - the placement of shards of wood against a black background – is apparent. The broken wood serves the same function as the frame fragments in Blue square1 and Blue square 2; the heightened material nature has a very concrete, physical quality that might engender a phenomenological response and work against the intellectual activity of assembling language.