The exhibition is composed of works that dialogue through the phenomenological experience of reflection to convey the process through which concepts and ideas are formed in relationship to the material, social and historical contexts that surround us. 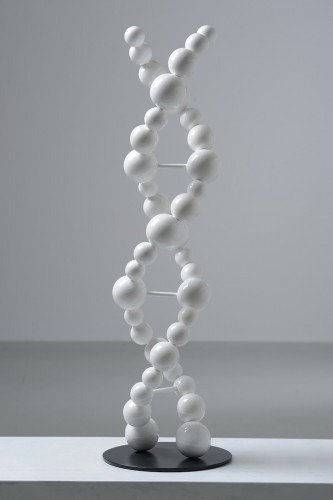 Investigating the concept of “reflection” in reference as much to the materiality of the works as to the intellectual reflection they produce on human experience in both perceptual and cognitive terms, the exhibition is composed of works that dialogue through the phenomenological experience of reflection to convey the process through which concepts and ideas are formed in relationship to the material, social and historical contexts that surround us.

Olafur Eliasson’s light-reflecting Emergence Lamp 9 creates an immersive experience actively engaging the viewer in the interpretation of the work, the meaning and concrete materiality of which is revealed only through its encounter with the viewer’s perception. In Kutlug Ataman’s The Complete Works of William Shakespeare, the dramaturgical texts that were originally intended for the stage are animated one after the other on a flat surface at an illegible speed, thus reflecting on the loss of meaning and trauma resulting from the encounter of Western and Eastern concepts of text and book. In Nanjing Particles, Simon Starling proposes a reflection on photography as a medium and on its relationship with historical truth by scratching the silver particles off the two dimensional surface of a 19th century archival footage to create large, stainless steel sculptures replicating their exact form. He thus reveals a permanent trait characterizing East-West relationships from the 19th century Chinese immigrant workers imported in Massachusetts, to present day workers in China who built Starling’s two sculptures with the same title and whose distorted faces we see reflected from the surface of the sculpture, onto the final photographs.

Cevdet Erek takes the Turkish word for reflection, “yansima”, which also means “onomatopeia”, and builds a conceptual link between visual and auditory forms beyond language and through an investigation of sounds, words and visual forms that human beings develop by imitating nature with their bodies and physical movements. “Reflection” thus refers both to the mimetic mechanisms of imitation and representation and to abstraction through dialectic encounter in a single act and through different variations, proposes to consider “mimesis” and “performativity” together.

The second floor of the gallery is turned into a film theatre, projecting 3 different films everyday starting at 11:00 am, 2:00pm and 4:45pm. Rirkrit Tiravanija’s Chew The Fat is a series of autobiographical conversations between Tiravanija and 12 well-known artists of his generation including Pierre Hyughes, Jorge Pardo, Douglas Gordon Angela Bulloch and Philippe Parreno. Mario Garcia Torres’ The/Tea and Francis Alÿs’ Reel-Unreel, two films commissioned by Documenta 13 will be shown in Istanbul for the first time after premiering in Kassel. The/Tea is an essay and documentation of Garcia Torres' artistic gesture surrounding Alighiero Boetti's One Hotel in Kabul, Afghanistan, reflecting on the inevitable presence of the artist in his own work as a "persona". Inspired by the miraculous rescuing of the Afghan film archive, Francis Alys' film Reel/Unreel reflects on our relationship to image and representation by connecting a film roll to the children's street game of rolling a wheel with a stick.

Reflecting on Reflection also presents a self-reflective stance by displaying works that engage with Galeri Manâ’s space and the history of its building: Ozgur Demirci’s Penalty Area, with its chalk-on-blackboard imagery, evokes the internalization of violence through education while with its installation on the front façade of the gallery building, it becomes a self-reflective sign of the gallery and the exhibition echoing into the street. A site-specific work by Hera Buyuktasciyan, installed on the wellhead that has been long devoid of its function, activates the cistern beneath the gallery building and its invisible history. In this sense, Reflecting on Reflection resonates with Galeri Manâ’s new direction and practice as a gallery and marks the beginning of a new cycle under the curatorship of Abaseh Mirvali, focusing on social, historical and architectural aspects of the building and the neighborhood that the gallery inhabits. It is the first in a series of exhibitions concerned with “reflection” and “reflecting”, taken not only physically, as in sound waves or light, but intellectually, analyzing, reconsidering and questioning experiences within a broad context of issues.

Abaseh Mirvali is the Chief Executive Officer and President, Comisaria of Platform 5280, Biennial of the Americas, a biennial of contemporary art and critical thinking taking place in July 2013. Mirvali resided in Turkey between 1998-2002 and has returned annually since then. Between 2005 and 2008, she served as Executive Director of the Jumex Foundation/Collection, a post in which she successfully consolidated, institutionalized and developed one of the largest and most important collections of contemporary art of a private institution in Latin America. Invited to be a juror of the Magic of Persia Contemporary Art Prize in 2010, she also coordinates lectures on the new emerging scenes in contemporary art in the “Conversations” series of Art Basel in Basel and Miami. Ms. Mirvali sits on the selection committee for several foundations, and in addition to advisory and directorial roles, is an internationally recognized contemporary art commentator and jurist.

Galeri Manâ, located in the Tophane district of Istanbul, is a converted wheat mill that dates to the 19th century and features 400 square meters of exhibition space. Founded by Mehveş Arıburnu in 2011, the gallery seeks to establish an inclusive and interdisciplinary dialogue through its artistic program, special events and publications. Galeri Mana works with artists who stand on the edges of contemporary artistic practice by investigating the boundaries of their mediums and expanding their conceptual reach.