John Cage - 4'33'' - Silence Today (1912 - 1952 - 2012). The exhibition features work by more than 40 international artists and focuses on current artistic and musical references to 4'33''. It thus comprises numerous installations, audio works, performances and video works. Concurrently with the show Fluxus - Art for All! of Museum Ostwall. 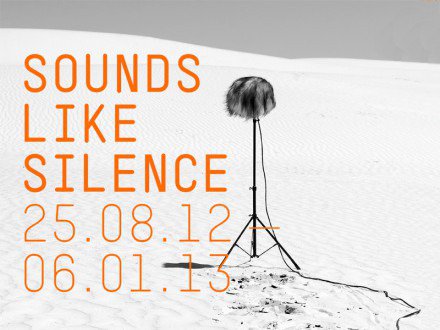 In 2012 the world celebrates the centenary of John Cage's birth and the 60th anniversary of the premiere of the composer's "silent piece" 4'33'' ("four minutes, thirty-three seconds"). This composition in three movements without intentional sounds is Cage's most prominent work today. The exhibition Sounds Like Silence, organized by Hartware MedienKunstVerein (HMKV), shows how artists continue to refer to 4'33'', whether explicitly or by addressing wider issues such as silence and sound ecology. The exhibition features work by more than 40 international artists.

The exhibition, which runs from 25 August 2012 to 6 January 2013, unfolds over four floors at the Dortmunder U – Center for Art and Creativity. It will occupy the entire 3rd floor (HMKV) and the 6th floor (Gallery) space for temporary exhibitions. Furthermore the Lautsprecher (4th floor) will host a programme of sound art, and the RWE Forum | U Cinema will stage performances, talks and film screenings.

The exhibition effectively starts in the wee hours of 24 August 2012 with the radio broadcast Sounds Like Silence on Deutschlandradio Kultur (00:05 to 1 am). The broadcast is subsequently published as a CD on the label Gruenrekorder and will be available in the exhibition.

The opening at Dortmunder U starts at 7 pm on 24 August 2012, concurrently with the exhibition FLUXUS – Art for All! of Museum Ostwall. Both exhibitions will run through 6 January 2013. During the opening the entrance is free of charge. In the days between the opening of the exhibition on 24 August and the anniversary of the premiere of 4ʼ33ʼʼ on 29 August 2012 the HMKV will host a week-long programme of events including live performances, concerts, artistsʼ talks, a discussion panel with the authors of the accompanying publication, lectures, film screenings and excursions (for details please refer to the press release detailing the programme).

Between the opening of the exhibition and the anniversary of the premiere of 4'33'' on 29 August, HMKV will run a week-long programme of events with live performances and concerts (a.o. by Dave Allen), artist talks, a panel with the authors of the publication accompanying the exhibition, lectures, film screenings and field trips. The film programme includes documentaries about John Cage and others.

To mark the 60th anniversary of the premiere of the "silent piece" 4'33" the HMKV organises a concert night around works by John Cage on 29 August. The programme starts with a live performance of Imaginary Landscapes No. 4 (1951) by 24 musicians, followed by 4'33" in Concert, a programme of pieces by John Cage and original interpretations played by a jazz ensemble with Matthias Mainz, Simon Rummel, Angelika Sheridan, Vincent Royer and Carl Ludwig Hübsch. The evening concludes with the Williams Mix for magnetic tape (Original Version by John Cage, 1952) and the Williams Mix Extended for eight channel digital audio (2011) by Werner Dafeldecker and Valerio Tricoli.

The exhibition is accompanied by an extensive publication (Sounds Like Silence, ed. by Dieter Daniels and Inke Arns, Leipzig: Spector Books, 2012), which will be available at the venue.

As part of a series of talks and lectures, the HMKV launches this publication on 25 August (16–19) at Dortmunder U. Guests include contributors Jan Thoben (Berlin) and Julia Schröder (Berlin) as well as Jan Wenzel (Leipzig) from Spector Books. Hans-Friedrich Bormann (Nürnberg/Erlangen) will talk about John Cage's voice, while Max Schneider will focus on acoustic ecology.

From 1 until 31 August, the HMKV presents Dave Allen's sound art piece Silent Recording, Hansa Studios Berlin at the Loudspeaker (Lautsprecher)—a dedicated space for sound art on the 4th floor of the Dortmunder U. From 1 until 31 December, Christopher DeLaurenti's work Favourite Intermissions: Music Before and Between Beethoven–Stravinsky–Holst will be accessible in the same space during regular exhibition opening times.

The exhibition begins in the early morning hours of 24 August with the radio programme Sounds Like Silence on Deutschlandradio Kultur (00:05–1h) curated by Inke Arns and Dieter Daniels. (CD recordings of the programme are available in the exhibition.)

Sounds Like Silence is generously supported by Kunststiftung NRW.

Hartware MedienKunstVerein (HMKV) at Dortmunder U Dortmunder U – Zentrum für Kunst und Kreativität
(Centre for Art and Creativity) Leonie-Reygers-Terrasse 44137 Dortmund, Germany
Hours: Tue–Wed 11–18; Thu–Fri 11–20, Sat–Sun 11–18
Entrance:
€5 / €2.50 concessions, free entrance for visitors under 18
Free admission on the first Wednesday of every month
Free admission for minors (under 18)
Admission to the film programme is free