The exhibition "A House to Die In" is the result of a close collaboration between Melgaard and award-winning Norwegian architectural firm Snohetta. The artist will present a 1:1 facade of the proposed building, alongside models and drawings that form part of a wider body of research. 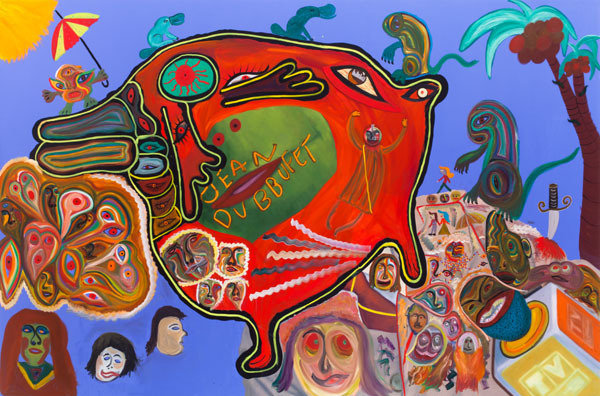 The ICA is delighted to announce that Bjarne Melgaard will be the subject of a major solo exhibition coinciding with London’s Frieze Art Fair. Having spent much of his time in Norway, Melgaard currently lives in New York where he occupies a vast studio in Bushwick, Brooklyn.

The exhibition, A House to Die In (2012) is the result of a close collaboration between Melgaard and award-winning Norwegian architectural firm Snøhetta.

Since 2011, Melgaard and Snøhetta have exchanged architectural drawings, models and documents as they work towards the realisation of a purpose-built house, commissioned by the Selvaag family and Sealbay AS, where Melgaard will live and work.

For his exhibition in the ICA upper and lower galleries, Melgaard will present a 1:1 facade of the proposed building, alongside models and drawings that form part of a wider body of research. This material constitutes the first stage in the construction of the final building, scheduled to be built in 2014 in Oslo, Norway.
The collaborative process between Melgaard and Snøhetta is a positive struggle in which both parties are constantly challenged, notably in Snøhetta's interpretation of Melgaard’s two-dimensional and analogue drawings through three-dimensional digital renderings of the objects. Furthermore, various processes of mathematical abstraction have led to multiple stages of representation of the original information, namely Melgaard’s vision of a house ‘to die in’, a project outside their comfort zone.

Snøhetta’s focus is primarily architectural; whilst Melgaard’s foremost fear is to end up inhabiting the territory of ‘pure architecture’. In this process Snøhetta depart from their comfort zone and well- rehearsed creative processes and seek a new approach to constructing built forms. At the same time there is a fine balance between thinking and simply producing in this process, as the aim is to maintain the inherent quality and identity of Melgaard’s work in the end result.

The Upper Galleries display a body of work which was created by Bjarne Melgaard in partnership with a group of artists (several of whom are in recovery, face mental or emotional challenges or suffer from schizophrenia) without any formal art education and with little awareness of or connection to the contemporary art world who have responded directly to his works. The collaboration resulted in a layered conversation between the artists that responded and expanded on Melgaard’s visual language and subject matter.

‘In this project, the joint authorship reflects the complexity of the artwork. Working with Bjarne challenges us to discover the boundaries of our capabilities.’ Kjetil Thorsen, Snøhetta.

About Snøhetta
Formed in 1989, Snøhetta is an award-winning international architecture, landscape architecture, interior architecture and graphic design firm based in Oslo and New York. As of 2012, the firm, which is named after one of Norway`s highest mountain peaks, has approximately 120 staff members working on projects in Europe, Asia, the United States and Canada. The practice is centered on a transdisciplinary approach where multiple professions work together to explore differing perspectives on the conditions for each project. A respect for diverse backgrounds and cultures is a key feature of the practice; reflecting this value, Snøhetta is composed of designers and professionals from around the world.
Snøhetta has during the last 10 years won several major projects all over the world, mentioning National September 11 Memorial Museum Pavilion at the World Trade Center in New York, San Francisco Museum of Modern Art, Mutrah Fishmarket in Oman and King Abdulaziz Center for World Culture in Dhahran, Saudi Arabia.
In 2004 the company received the Aga Khan Award for Architecture and in 2009 it was honored with the Mies van der Rohe Award. Snøhetta is the only company to have twice won the World Architecture Award for best cultural building, in 2002 for the Bibliotheca Alexandrina and in 2008 for the National Opera and Ballet in Oslo.

The house is commissioned by the Selvaag family and Sealbay AS

The ICA exhibitions are complemented by a wide range of events, performances and talks relating to the artists featured and central themes of the programme.