Collection Sandretto Re Rebaudengo - Think Twice. The exhibition offers an opportunity to see some of Cattelan's intimate earlier works. The artist is often known as the art world's joker, using what seem to be stunts to address universal themes including power, death and authority. Highlights include a sculptural installation featuring a stuffed squirrel which has shot itself at the kitchen table, titled Bidibidobidiboo (1996). 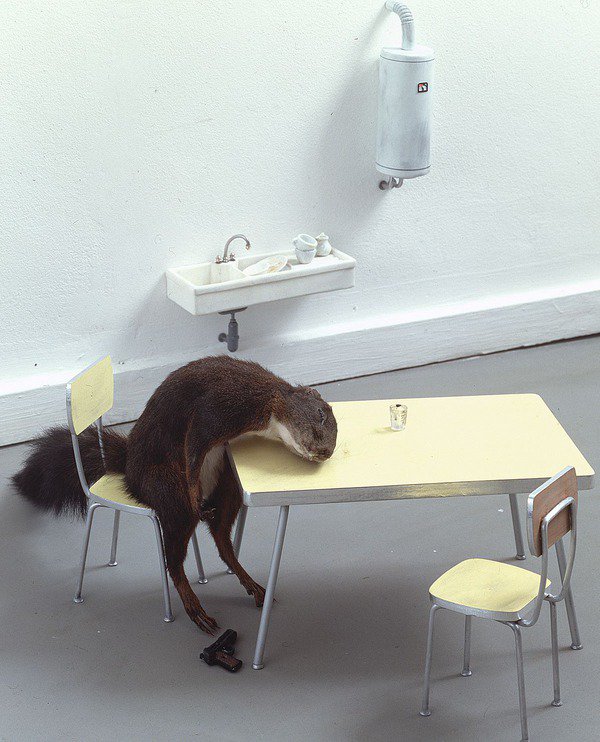 The Whitechapel Gallery presents rarely seen works of art from the Collection Sandretto Re Rebaudengo - opening with a display dedicated to the works of Maurizio Cattelan on 25 September 2012.

Since the 1990s Patrizia Sandretto Re Rebaudengo has collected contemporary art. One of the most important private collections in Europe, it includes leading international artists such as Doug Aitken, Jake & Dinos Chapman, Thomas Demand, Damien Hirst, Paul McCarthy, Reinhard Mucha, Sarah Lucas, Paola Pivi, Anish Kapoor and Mike Kelley. A series of four displays at the Whitechapel Gallery over one year will show highlights from the collection and draw on its themes.

Italian artist Maurizio Cattelan is often known as the art world’s joker, using what seem to be stunts to address universal themes including power, death and authority. His memorable sculptures include Pope John Paul II struck down by a meteorite, his staging an exhibition of a ‘back soon’ sign on the door of an empty gallery or reporting a robbery of an ‘invisible exhibition’ to Italian police. His work often blurs the line between art and reality to provoke reaction.

The Whitechapel Gallery now displays works by Maurizio Cattelan – many not seen in the UK for over 20 years - in the first display from the Collection Sandretto Re Rebaudengo from 25 September – 2 December 2012. The display offers an opportunity to see some of Cattelan’s intimate earlier works. The Whitechapel Gallery Collections programme is supported by specialist art insurer Hiscox.

Highlights include a sculptural installation featuring a stuffed squirrel which has shot itself at the kitchen table, titled Bidibidobidiboo (1996). Titled after the fairy godmother’s song in Cindarella, it caricatures the idea of childhood innocence. In another sculpture the emblem of the 1970s terrorist group Brigate Rosse is turned into a neon Christmas greeting by Cattelan, while in Il Bel Paese (1995) a cheese naming Italy as ‘a beautiful country’ becomes a rug on which to walk. The idea of art potentially reforming society becomes the butt of Cattelan’s joke, when he makes an effigy of himself dressed in iconic artist Joseph Beuys trademark grey felt suit, hanging by the neck from a clothes rack.

The presentation of the collection of Patrizia Sandretto Re Rebaudengo is part of the Whitechapel Gallery’s ongoing programme of opening up collections that are rarely seen by the public in the UK. The Collection now has over 1,000 works of art made by both internationally acclaimed and emerging artists over the last 30 years. Key works in the Collection include Damien Hirst’s The Acquired Inability to Escape, Inverted and Divided (1993), Love Me (1998) by Sarah Lucas, Bang Bang Room (1992) by Paul McCarthy and Viral Research (1986) by Charles Ray. Leading artists represented in the Collection include: Doug Aitken, Matthew Barney, Glenn Brown, Jake & Dinos Chapman, Thomas Demand, Hans-Peter Feldmann, Urs Fischer, Andreas Gursky, Thomas

Hirschorn, Damien Hirst, Sherrie Levine, Paul McCarthy, Reinhard Mucha, Sarah Lucas, Paola Pivi, Anish Kapoor, Mike Kelley, Charles Ray, Cindy Sherman, Rudolf Stingel and Piotr Uklanski. The series of four displays will include many works of art shown in Britain for the first time in many years. The displays are shown in the dedicated Collections Gallery. Following the first presentation of works by Maurizio Cattelan, three further displays of sculpture and photography will explore other key themes in the Collections, from 15 December 2012 – 10 March 2013; 19 March– 9 June 2013; and, 18 June – 8 September 2013.

Maurizio Cattelan was born in Padua, Italy, in 1960. He has exhibited at Skulptur Projekte, Münster (1997), the Tate Gallery (1999), the Museum of Contemporary Art, Los Angeles (2003), and participated in the Venice Biennale (1993, 1997, 1999 and 2002). He received an honorary degree in Sociology from the University of Trento, Italy, in 2004, and was also awarded the Arnold-Bode prize from the Kunstverein Kassel, Germany, the same year. He lives and works in New York and Milan.

For over a century the Whitechapel Gallery has premiered world-class artists from modern masters such as Pablo Picasso, Jackson Pollock, Mark Rothko and Frida Kahlo to contemporaries such as Sophie Calle, Lucian Freud, Gilbert & George and Mark Wallinger. With beautiful galleries, exhibitions, artist commissions, collection displays, historic archives, education resources, inspiring art courses, dining room and bookshop, the Gallery is open all year round, so there is always something free to see. It is a touchstone for contemporary art internationally, plays a central role in London’s cultural landscape and is pivotal to the continued growth of the world’s most vibrant contemporary art quarter. The Gallery does not own a Collection, but has a dedicated gallery for showing collections rarely seen by the public, including five displays from the British Council Collection from April 2009 – May 2010; four displays from The D. Daskalopoulos Collection, Greece, from June 2010 – May 2011; and five displays from the Government Art Collection, from June 2011 – September 2012.

Patrizia Sandretto Re Rebaudengo graduated in business studies and economics at the University of Turin, following which she initially worked for the family business. She started collecting contemporary art in the early 1990s and it was her passion for supporting artists by being involved in the production of new works and the lack of exhibition spaces dedicated to young emerging artists in Italy that led her to set up the Fondazione Sandretto Re Rebaudengo in 1995, of which she is President. She is an active patron of the arts and charities, as a Member of the International Council and Member of the Friends of Contemporary Drawing at the Museum of Modern Art, New York (since 1996); Member of the International Council, Tate, London (since 1997); Member of the Leadership Council, New Museum, New York (since 2007); Member of the Advisory Committee for Modern and Contemporary Art, Philadelphia Museum of Art (since 2008); patroness Italian Red Cross (since 1992). She was awarded the title Ufficiale della Repubblica by the Italian State in 2005 and Chevalier dans l'ordre des Arts et des Lettres by the French Ministry of Culture in 2009. Patrizia Sandretto Re Rebaudengo is married with two children, and lives in Italy.

Fondazione Sandretto Re Rebaudengo is under the artistic directorship of Francesco Bonami. The Fondazione was housed at the Palazzo Re Rebaudengo in Guarene d’Alba, a small town outside Turin, and has commissioned and shown leading artists including: Doug Aitken, Damien Hirst and Shirin Neshat. In 2002 the Fondazione opened its current headquarters, a 3,500 square metre centre for contemporary art in Turin, designed by Claudio Silvestrin, with a gallery space, bookshop, auditorium, educational department, cafeteria and restaurant. The centre presents exhibitions of local, national and international artists for many different audiences and ages with a wide-ranging programme of activities and events (films, talks, music, theatre, performance and dance). The Fondazione also organises a Young Curators Residency Programme and an annual Prize (Premio StellaRe) honouring women’s achievements across the world. www.fsrr.org

The Street is a programme of artist projects, events and research taking place both in and beyond the Gallery. Artist Matt Stokes has made a film tracing a story set within the local Bangladeshi community. Matt Stokes (b. 1973) immerses himself in communities to look at the culture that shapes people’s lives. His projects develop into films, installations, archives and events that utilise the collective knowledge and skills within these communities.