The solo exhibition consists of four new sculptures, fallen objects that articulate questions about the nature of the divine. 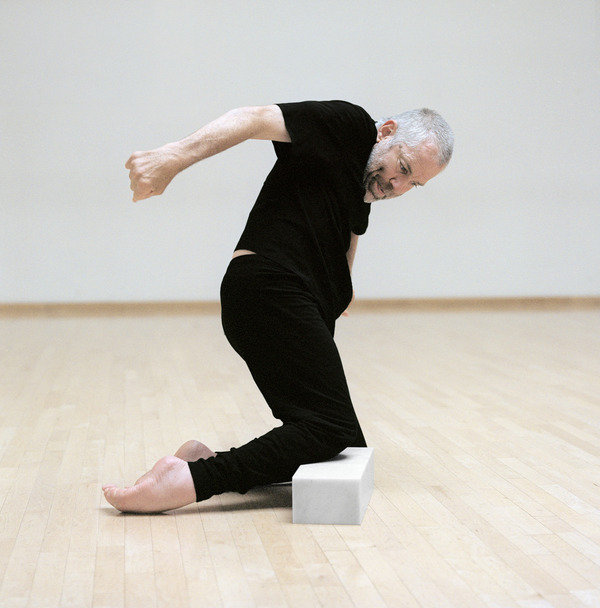 "Is there a measure on earth?" (Hölderlin)

The exhibition consists of four new sculptures, fallen objects that articulate questions about the nature of the divine. The sculptures, made of marble, metal and wool, change the space and challenge the viewer.

Kneeler places a cushion on a slab of marble, evoking a church altar rail kneeler and a state of vulnerable yet transcendent piety.

Groma draws on the form of an ancient surveying tool, at once speaking of measurements, divisions and limits, whilst the points of the compass balance with fragility, a rising cruciform stabilized by stainless steel chains.

Fence confronts the viewer with its bare presence – free from other linkages it suggests the outline of a portal. At once offering and restricting access, the work presents a meditation on the logic of the limit.

Sword presents a marble slab, with a sword blade half embedded into it – an altar that speaks of the impossible immanence of death, sacrifice and the limit-experience.

The classicism of these sculptures is inherently paradoxical. Lichty’s work expresses limits – in ourselves, in objects – limits that cannot designate the divine measure on which the project of classicism relies. The fragile formalism of these sculptures betrays the suspension of a transcendental origin from which they might draw their ultimate measure. It is perhaps in this unmeasure that the divine is guarded and preserved as a retreat and turning-away from the world of objects.

These recent sculptures present a topology of the impossible. Perhaps in contemplating finitude we are nonetheless invited to consider these works as somehow offering an experience of the sacred in its absence or mere trace.