The exhibition is conceived as an encounter in visual form between two artists who have known each other for the last 17 years and have had wide-ranging conversations about architecture, color, modernism, temporality and the archive, subjects that have been at the core of their respective art in varied ways. 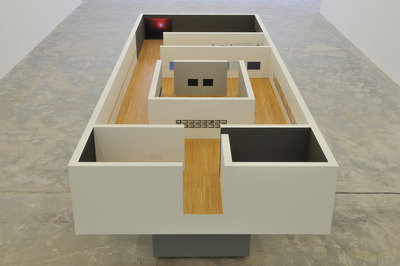 The Paula Cooper Gallery is pleased to present recent work by Walid Raad and David Diao, opening on September 22 at 521 West 21st Street. The exhibition is conceived as an encounter in visual form between two artists who have known each other for the last 17 years and have had wide-ranging conversations about architecture, color, modernism, temporality and the archive, subjects that have been at the core of their respective art in varied ways.

Walid Raad will present recent works from an ongoing project entitled “Scratching on Things I Could Disavow: A History of Art in the Arab World”. Since 2007, the artist has been exploring how recent historical events in the Middle East have affected the creation, exhibition and experience of art in the region and abroad. “Scratching…” takes as its point of departure the vertiginous expansion of the infrastructure for the arts in the Arab world to produce works that register, in their very fabric, the effect of material and immaterial pressures.

Raad lives in New York and has been Associate Professor of Art at The Cooper Union, New York, since 2002. A version of “Scratching on Things I Could Disavow” was presented this summer in Documenta 13, Kassel. Among the international exhibitions he has participated in are Documenta 11 (2002), the 2000 and 2002 Whitney Biennials, the 2003 Venice Biennale, and the 2011 Sharjah Biennial. He has had one-person exhibitions at the Hamburger Bahnhof, Berlin (2006), the Reina Sofia Museum, Madrid (2009), the Whitechapel Art Gallery, London (2010) and Museo Tamayo (2011), among other venues. His work is in the collection of the Museum of Modern Art, the Guggenheim Museum, the Whitney Museum of American Art, the Walker Art Center, the Kunsthaus Zürich, the Centre Pompidou, and numerous other institutions. He is the recipient of the 2011 Hasselblad Award.

David Diao is known for paintings and collages that examine the legacy of artists such as Kasimir Malevich, Barnett Newman and Gerhard Richter, and architects Mies van der Rohe, Marcel Breuer and Philip Johnson. Using catalogue pages, documentary photographs and other ephemera, and through a combination of text and abstracted iconography, Diao creates works that comment on the history of Modernism in art and architecture. For this exhibition, Diao uses a photograph of the Russian architect Konstantin Melnikov’s studio in Moscow. Built in 1927 and until very recently left in a sad state of disrepair, the cylindrical space and its array of hexagonal windows serve as a point of departure for a group of paintings that consider Melnikov’s life and the varying fortunes of his career.

Diao was born in Chengdu, China, and immigrated to the United States in 1955. He has been exhibiting since 1967 and had his first individual exhibitions at the Paula Cooper Gallery in 1969 and 1970. His work is in the collections of the Whitney Museum of American Art and the Brooklyn Museum, the Albright-Knox Art Gallery, the San Francisco MOMA, FNAC, France, the Ontario Art Gallery and the Vancouver Art Gallery, among others. He was included in "High Times, Hard Times: New York Painting 1965-75" which traveled to numerous museums in the US, Mexico and Europe (2006-2008); and in “The Indiscipline of Painting: International abstraction from the 1960s to now, Tate St. Ives and Warwick Arts Centre, Coventry, UK (2011-2012). He will be in the new iteration of “Conceptual Abstraction” at the Hunter College Gallery opening on October 3. This show reprises and brings to the present the original show at the Sidney Janis Gallery (New York) in 1991. He is newly elected to the National Academy. He lives and works in New York, and is represented by the Postmasters Gallery, New York.

For more information and images, please contact the gallery: (212) 255-1105; info@paulacoopergallery.com