The Individual and the Organisation. Conceived by Barbara Steveni in 1965 and established a year later by Steveni and John Latham along with David Hall, Anna Ridley and Jeffrey Shaw, among others, APG negotiated approximately fifteen placements for artists lasting from a few weeks to several years. 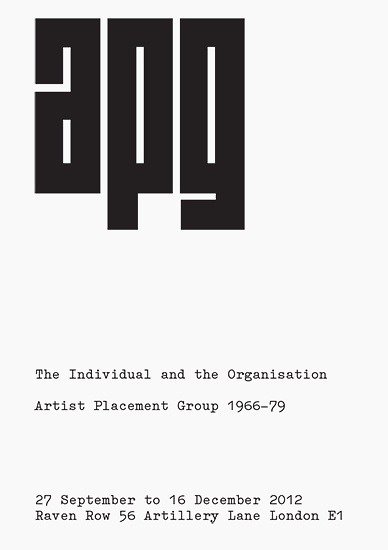 curated by Antony Hudek and Alex Sainsbury, in consultation with Barbara Steveni.

This will be the first retrospective of the pioneering artists' organisation Artist Placement Group, or APG, conceived by Barbara Steveni in 1965 and established a year later by Steveni and John Latham along with Barry Flanagan, David Hall, Anna Ridley and Jeffrey Shaw, among others.

Between 1966 and the turn of the 1980s, APG negotiated approximately fifteen placements for artists lasting from a few weeks to several years; first within industries (often large corporations such as British Steel and ICI) and later within UK government departments such as the Department of Health and the Scottish Office. APG arranged that artists would work to an ‘open brief’, whereby their placements were not required to produce tangible results, but that the engagement itself could potentially benefit both host organisations as well as the artists in the long-term. Artists' work in proposing and carrying out placements will be represented here in diverse ways, in films, photographs, texts and correspondence and sometimes in art objects.

APG was a milestone in Conceptual Art in Britain, reinventing the means of making and disseminating art, and anticipating many of the issues facing cultural workers today. It represented itself in a number of exhibitions and events, notably in the exhibition Art and Economics at the Hayward Gallery in 1971 with artistic interventions by Garth Evans, Barry Flanagan, John Latham and others. Emulating APG's emphasis on the discursive, the exhibition will host frequent public discussions relating to art and social organisation.

APG was from the start outward facing, building contacts with artists and institutions in the US and Europe. Germany stands out as particularly receptive to APG's approach, thanks to key figures such as Joseph Beuys, Jürgen Harten, Drs Reimut and Margarethe Jochimsen and Rolf and Ros Sachsse. In this panel discussion, Barbara Steveni, Rolf and Ros Sachsse and former APG Director Nicholas Tresilian reflect on the deep ties between APG and Germany, which served as a gateway for APG's methodologies to be introduced on the continent.

This event is free but booking is essential. Please email info@ravenrow.org to reserve a place.