Featuring more than 100 works - borrowed, newly-produced, or from the museum's own collection - the project takes off on a 450-year voyage into the subconscious. Apart from classic surrealism, a substantial part of the exhibition consists of works from the post-war period until today. The voyage sets off in 1591 with Arcimboldo, and ends in 2012 with new works by Carsten Holler and Magnus Wallin. 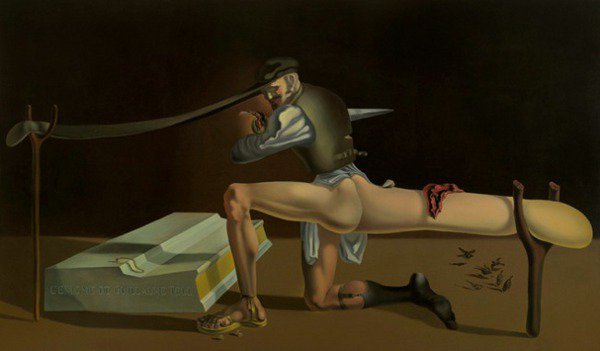 This autumn, Moderna Museet Malmö is presenting surrealism as it has never before been shown. In the museum’s largest ever exhibition, THE SUPERSURREALISM takes over the entire building. Visitors are invited on a voyage in time that sets off in 1591 with Arcimboldo, and ends in 2012 with new works by Carsten Höller and Magnus Wallin. In between are works by classic surrealists such as Salvador Dalí, Meret Oppenheim and Max Ernst. THE SUPERSURREALISM looks at the time before, during and after the surrealist period, in an attempt to explore how surrealism is expressed today. Does it still have its power to shock, surprise and outrage?

Moderna Museet has a substantial collection of surrealist works from the crucial years around 1920-40, comprising paintings, sculptures and objects. It includes legendary artists such as Salvador Dalí, Meret Oppenheim, Louise Bourgeois, Max Ernst, Man Ray and many others. This collection forms the core of THE SUPERSURREALISM, meaning that the entire collection of surrealist works will be shown for the first time in the Öresund region. A key work is Salvador Dalí’s famous painting The Enigma of William Tell from 1933, which practically never leaves Moderna Museet in Stockholm. The presentation in Malmö is therefore unique:

“The Enigma of William Tell is usually not lent from Moderna Museet in Stockholm. Pontus Hultén bought the painting in 1967 directly from Dalí, and Moderna Museet has only lent it out twice. Together with Rauschenberg’s goat, “The Buttock” is Moderna Museet’s most famous work of art, and it is considered to be one of the most prominent surrealist works and one of Dalí’s finest,” says John Peter Nilsson, director of Moderna Museet Malmö and curator of this exhibition.

THE SUPERSURREALISM is an experimental presentation. Featuring more than 100 works - borrowed, newly-produced, or from the museum's own collection - THE SUPERSURREALISM takes off on a 450-year voyage into the subconscious. Apart from classic surrealism, a substantial part of the exhibition consists of works from the post-war period until today. Contemporary works by artists such as Nathalie Djurberg and Magnus Wallin and a spectacular new work by Carsten Höller are juxtaposed with post-war existential depths, 1960s psychedelic art, sexual liberation and transcendental approaches to identity. The prehistory of surrealism will also be dealt with in a spatial curiosity cabinet. Skokloster Castle has contributed a renaissance painting by Arcimboldo, while the Nationalmuseum in Stockholm has lent us etchings by Piranesi and the symbolist painter Odilon Redon. A true rarity is the never-before exhibited drawing book by Hilma af Klint, which foreshadows surrealism's automatic writing. Altogether, the exhibition develops into an eruption of supersurrealistic images.

“Just before he died, the founder of surrealism, André Breton, said that ‘surrealism existed before me and I believe it will also outlive me’. Inspired by his statement, this exhibition features works stretching from 1566 to 2012, arranged according to an inverted chronology in three chapters: before, during and after. Not everything is strictly surrealist, but it can be regarded in relation to surrealism,” says John Peter Nilsson.

The writer Douglas Coupland presents his view on supersurrealism in a new essay in the exhibition folder, which he also designed. In his essay, Coupland identifies how media such as the internet affect the collective subconscious in our online world.

“Douglas Coupland has shown himself to be an astute interpreter of contemporary society ever since his first novel ‘Generation X’ in 1996. He proposes that the internet can be seen as a reflection of our subconscious. All our hidden fantasies and desires are revealed on the web. The impact of this digital reality gives a new perspective on concepts such as time and space, an aspect that has been explored in art, especially from the 1960s and onwards,” says John Peter Nilsson.

THE SUPERSURREALISM opens on the Malmö Gallery Night, 29 September, at 6 pm. In the course of the evening, performance artists Jenny Grönvall and Line Skywalker Karlström will comment on the exhibition. Free admission all evening. This is the first event in an extensive series that will continue throughout the autumn and winter. In association with the Friends of Moderna Museet, the concept of supersurrealism and its manifestations in various fields will be explored in a series of lectures under the heading of Surrealisms. In connection with the :by Light festival on 2-11 November, David Krantz will be showing an outdoor light installation and an indoor 3D animation. Several performances will also take place in the course of the exhibition. Moreover, a series of films will be shown daily throughout the exhibition, presenting the world of Salvador Dalí.

The exhibition is supported by E.ON and Deloitte.

RSVP for the press preview by Wednesday, 26 September to: Sofia Alsterhag s.alsterhag@modernamuseet.se

Invitation to the press preview on 27 September at 10.00-11.30 am. Introduction by John Peter Nilsson, director of Moderna Museet Malmö and the exhibition curator.